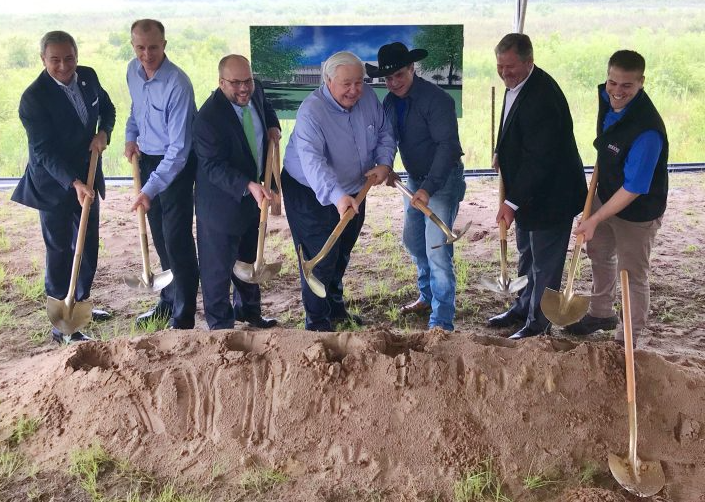 Frontier Logistics has broken ground on a 550,000-square-foot facility that will give the Port of Charleston a major boost in resin exports as it looks to capture spillover volumes from Houston.

The warehouse will be built on the former US Naval base near the Cooper River, about five miles from Frontier’s existing 100,000-square-foot facility in the North Rhett Commerce Center that will be vacated. The project is a signal that resin demand is so strong, significant new space is needed to handle booming exports.

Resin exports have surged 55 percent in Charleston since 2011, according to the South Carolina Ports Authority (SCPA).

“Frontier plays an integral role in the handling of SCPA’s plastics and resin business,” SCPA CEO Jim Newsome said. “Charleston is the emerging pivot point for both export and import US resin, and the Frontier Logistics expansion is a key component of the port’s planned above-market volume growth.”

Frontier purchased a 26-acre parcel on the former naval base in early 2018 and promised to spend $35.5 million to construct a new facility at the site. Original plans had the building at 400,000 square feet.

Palmetto Railways, a short-line railroad that connects to CSX Transportation and Norfolk Southern Railway in South Carolina, will serve the building once construction is complete next summer.

The Frontier ground-breaking in Charleston comes less than two months after Plastic Express announced a move to Savannah, Georgia, promising to export 25,000 resin containers in year one, which would more than double exports of that product out of the Garden City Terminal.

Houston handled 42 percent of US resin exports last year, with New Orleans second at 19 percent. The Port of New York and New Jersey and the Port of Charleston each account for about 7 percent of US market share, while the Port of Savannah handles about 4.1 percent, according to PIERS, a sister product of JOC.com within IHS Markit.

Resin producers expanding into Savannah and Charleston believe Houston’s infrastructure is not capable of handling all the resin growth expected in the coming years, although stakeholders in Houston have responded in recent years to those challenges.

There are more than 30 resin packaging machines now in the US Gulf Coast market to support producers compared with just 11 in 2015, bringing more than 5 million metric tons of annual capacity to the region.

Rail capacity has expanded with petrochemical producers buying more railcars, coupled with investments by producers and Class I railroads.