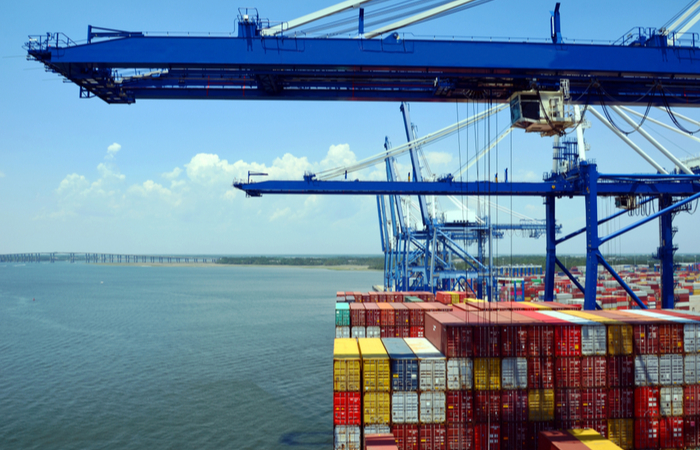 The South Carolina Ports Authority said it expected to return to close to business as usual Saturday after limited damage from Hurricane Dorian. Photo credit: Shutterstock.com.

South Carolina Ports Authority reopened the gates of its Charleston marine terminals Friday as Hurricane Dorian moved up the East Coast, while the Port of Virginia prepared to reopen Saturday.

Dorian made landfall in North Carolina Friday morning with 90 mph winds and an extensive storm surge. It was downgraded to a Category 1 storm with a path that was expected to continue to the northeast, although mainly offshore.

Freeport Harbor in the Bahamas was open Friday, according to the Grand Bahama Port Authority, but it was unclear how operational the port was given the devastating impact of Dorian on the Bahamas. “All vessels must stand two miles clear of channel until receiving clearance to enter,” the notice announcing the reopening said.

Port and government officials were onsite at the port Friday to prepare for a Monday reopening with limited operations, according to a customer advisory put out by Maersk Line late Friday. The port has no electricity to operate the gantry cranes so only vessels with cranes onboard will be serviced, the note said.

The Charleston terminals were scheduled to handle their first vessel at 7 p.m. Friday, with the MSC Ilona and MSC Marta scheduled to call, according to the port website. “We have our first ship docking right now,” said port authority CEO Jim Newsome at 5:10 p.m. ET, adding the authority expects to handle six ships on Saturday. Effects from the storm were minimal, with 10 empty containers damaged, he said.

The Port of Virginia planned to open its gates at 6 a.m. Saturday, although its ability to host vessels will depend on an analysis of the shipping channel by the US Coast Guard at about the same time, said spokesperson Joe Harris.

“The storm is largely over, and it's tracking out to sea,” he said at about 2 p.m. ET Friday, adding the port expects to work a full day Saturday.

The North Carolina State Ports Authority, which said the ports of Wilmington and Morehead City would be closed to commercial operations Thursday and Friday, posted a note on its website that Wilmington Container Gate would be open from 8 a.m. to 6 p.m. Saturday.

Wilmington and Morehead City will resume full operations on Monday, the website said.

Further north, the Port of Halifax was monitoring the progress of the storm. Spokesperson Lane Farguson cited a report from Environment Canada that the storm would move near or just east of Halifax Saturday night, with strong winds during the day and gusts of up to 90 miles per hour.

“Vessels that were scheduled to call on Saturday or Sunday have either arrived early or will delay their call until after the storm,” he said.

Global Shipping Outlook: A Sneak Peek at 2021
Port Performance North America: Managing Cargo Flow During a Pandemic — and Beyond
END_OF_DOCUMENT_TOKEN_TO_BE_REPLACED