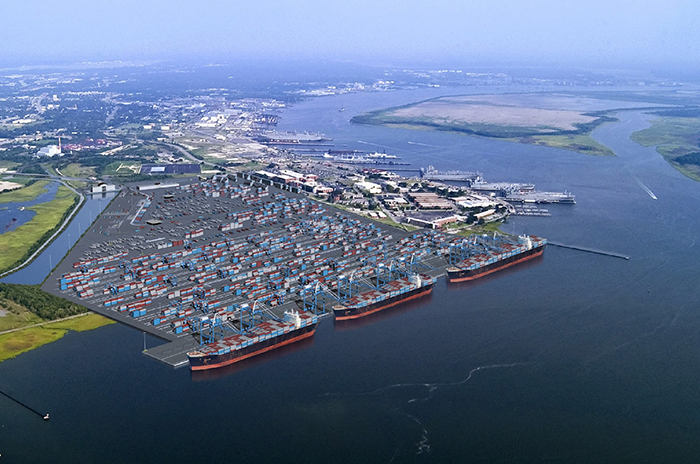 The Hugh K. Leatherman Sr. Terminal, an artist's rendering of which is pictured, is scheduled to open in 2019.

The South Carolina Ports Authority is suing a pair of contractors over the initial design of a containment area that ultimately will support the wharf of a new cargo terminal in North Charleston. But that will not impact the terminal’s completion, nor a separate environmental impact study that needs to be completed before construction can begin on a connected intermodal rail facility, according to the port authority.

In a lawsuit filed this week, the state port authority claims the engineering firms of Moffatt & Nichol and S&ME failed to properly test soils at the site of the future Hugh K. Leatherman Sr. Terminal before designing containment area walls. Those designs, the port authority contends, would not be strong enough to support the equipment that eventually will be in place at the terminal.

The work has also delayed use of the terminal, which is on the site of a former US Navy base in North Charleston. The Leatherman terminal was originally scheduled to open in 2013. Erin Dhand, a port authority spokesperson, said she could not comment on ongoing litigation, but did tell JOC.com, “The terminal is still slated to open in late 2019.”

The litigation will not delay the completion of an environmental impact study necessary for construction to begin on the Palmetto Railways Intermodal Container Transfer Facility, which will provide dual rail access to the Norfolk Southern Railway and CSX Transportation networks.

Neither Moffatt & Nichol nor S&ME were immediately available for comment.

Randy Paulson, chief marketing officer for the Long Beach, California-based Moffatt & Nichol, told the Charleston Post and Courier that it was “unfortunate” that the project had resulted in a lawsuit.

“We’re proud of the services we’ve provided on the project and we stand behind the work that we’ve done,” Paulson told the local newspaper. “We feel the facts will support our professional services.”

The 280-acre Leatherman terminal is in the still in the early stages of construction. The $750 million terminal is expected to open at about the same time as completion of the Charleston harbor deepening project.

Charleston aims to deepen the existing entrance channel from 47 feet to 54 feet and deepen the inner harbor from 45 feet to 52 feet. It will effectively give the port the deepest harbor on the US East Coast. Charleston and fellow East Coast ports are vying for the new mega-ships traversing a recently expanded Panama Canal, whose new locks can now handle ships with capacities of up to 14,000 twenty-foot-equivalent units, nearly triple the size of the ships that historically have transited the canal’s century-old waterway.

The port of Savannah is deepening its harbor to 47 feet and is expected to complete the project in 2020; further, south Everglades is going from 42 feet to 48 feet. New York-New Jersey Baltimore, Virginia, and Miami have depths of 50 feet.