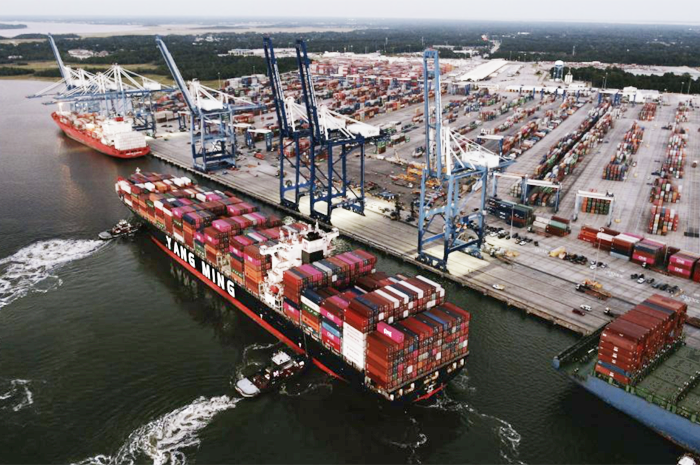 The federal government has awarded Charleston the final $138 million necessary to become the deepest port on the US East Coast at 52 feet, as part of a project due to be completed in 2022.

The funds are part of the US Energy and Water Appropriations Act signed into law Dec. 20.

“This is the big funding we needed to put everything in place to bring this home,” South Carolina Ports (SCPA) Authority CEO Jim Newsome told JOC.com. The port must also apply for federal reimbursement to repay a $50 million bridge loan, but this will occur after construction is finished.

The project, at a total cost of $558 million, will allow the Port of Charleston to handle three 14,000-TEU vessels simultaneously. The new Hugh Leatherman Terminal will have one 1,400-foot berth capable of handling an 18,000 to 20,000-TEU vessel when phase one opens in 2022.

Charleston isn’t the only US port to deepen its harbor. The $973 million Savannah Harbor Expansion Project will be completed in 2021, deepening the harbor to 47 feet. The Blount Island Terminal in Jacksonville, Florida, will also be deepened to 47 feet in 2023. The Virginia Port Authority is seeking Congressional approval to deepen to 55 feet in the Water Resources Development Act of 2020. The Port of Wilmington in North Carolina, and Boston have sought to deepen to 47 feet, and Port Everglades, Florida, to 48 feet. The ports of Baltimore, Miami, and New York and New Jersey are already at 50 feet.

Dredging, however, isn’t the only requirement to handle ultra-large container vessels crossing either the Panama or Suez canals. Port authorities must have cranes, berths, and landside capacity to handle containers while offering quick truck turn times.

Large cranes to remove the containers

The Wando Welch Terminal will have 11 cranes of 155 feet of lift height by next summer, necessary for how ocean carriers stack containers on a vessel. Three additional cranes should be commissioned before the end of 2020 and one in 2021, bringing the total to 15.

That would allow Charleston to simultaneously discharge three 14,000-TEU vessels with five cranes per vessel.

“We’ve had two [14,000-TEU vessels] already, so there is no reason why we couldn’t see three vessels [at the same time] in the next couple years,” Newsome said.

Five additional cranes capable of 169 feet of lift height will be commissioned in the Leatherman Terminal in 2022. Newsome said 18,000-to-20,000 TEU vessels would be routed to Leatherman because the vessels are 100 feet longer, requiring a longer berth and cranes with greater lift height. It would be a tight squeeze in Wando if there were other ultra large containerships, he acknowledges.

“You need to be capable of comfortably going over 10 or 11 containers high on deck. The 169-foot-tall cranes enable you to do it more comfortably than the 155s. You don’t want to tell an ocean carrier to stow a vessel in a certain way. You want them to determine how to stow their own vessel,” Newsome said. 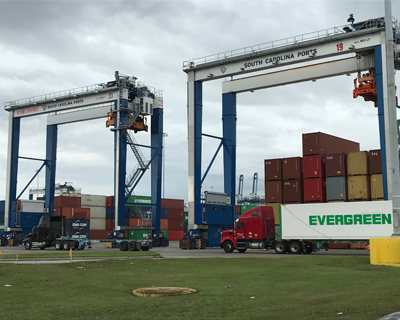 To handle the additional cargo, SCPA is increasing the number of boxes in Wando’s container yard. Operations are being converted from a manual picking system to more than 60 rubber-tire gantry cranes (RTGs). That would allow containers to be stacked tighter, Newsome said, increasing capacity by 700,000 TEU, to 2.4 million TEU annually.

The SCPA also moved the chassis depot outside the ingate to create additional terminal space. The biggest challenge is to maintain the 40-minute average turn time while also discharging three 14,000-TEU vessels, or a single 19,000-TEU vessel.

There is also pressure for the upgrades because of an expected burst in resin exports. Frontier Logistics broke ground in June on a 550,000-square-foot packaging plant on the former US Naval base near the Cooper River. A&R Logistics also plans to increase resin exports through Charleston and Savannah in the coming year, increasing the number of containers moving in and out of both ports in 2020.