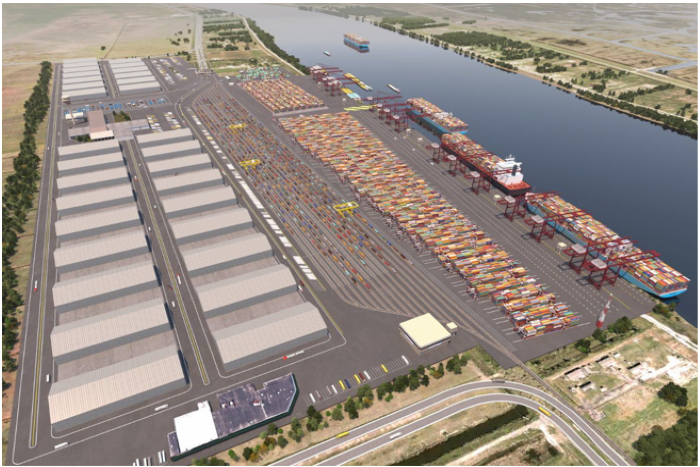 Plaquemines port envisions a 1,000-acre site capable of handling up to three 23,000 TEU ships, with up to 2 million TEU in overall annual capacity. Illustration credit: The Plaquemines Port Harbor and Terminal District.

A small port near the mouth of the Mississippi River in Louisiana is looking to build a state-of-the-art container terminal, one its planners say would help shippers bypass the congestion they face at other US ports. All they need to make it a reality is $5 billion.

The Plaquemines Port Harbor and Terminal District is starting a six-month review of the proposed project after signing a letter of intent with three other partners in August.

Sandy Sanders, the district’s executive director, said the greenfield project can take “all the best practices used currently in container terminals and roll them up into a blank canvas.”

Plaquemines’ grand ambition for a container terminal comes as other Gulf Coast ports are vying to host larger vessels and offer easier access to the US Midwest. Houston is planning a $1 billion project to widen and deepen its ship channel so it can handle two 14,000 TEU ships simultaneously. Dredging and terminal upgrades at Mobile, Alabama, will allow that port to also handle 14,000 TEU vessels. Additionally, a dredging project for the Mississippi River to go to 50 feet will allow the Port of New Orleans to handle similarly sized ships.

Plaquemines, about 20 miles south of New Orleans, handles energy, bulk commodity, and grain cargoes. The terminal’s 1,000-acre site would be capable of handling up to three 23,000 TEU ships, with up to 2 million TEU in overall annual capacity.

Other partners in the project include barging company American Patriot Holdings (APH), financial consultancy Louisiana 23 Development Company, and an unnamed marine terminal operator that would operate the site.

Plaquemines Port, which has about 100 miles on both sides of the river, sits on a very straight and wide part of the Mississippi, making it easy for ships to navigate, Sanders said. The US Army Corps of Engineers will also dredge parts of Plaquemines. But it’s already a deep-water port with depths over 50 feet, so there will be less costs for ongoing dredging maintenance.

The project would also include tying the site to the local short-line railroad, New Orleans & Gulf Coast Railway, which has a yard about five miles from Plaquemines and can bring containers to a BNSF Railway and Union Pacific Railroad yard west of New Orleans.

The project’s developers also plan to build an access road that can allow trucks on the north-south highway connecting Plaquemines to access interstate highways while bypassing New Orleans.

Chris Fetters, chief executive of Louisiana 23, said the project’s main selling point to shippers is the lack of congestion. With connections to BNSF and UP, Plaquemines will be able to vie with US West Coast ports for boxes headed into Dallas or the Midwest market.

“New Orleans suffers that same situation as any port surrounded by a city,” Fetters said.  “This is an opportunity to bypass congestion as fast and efficiently as possible.”

The port also hopes to tap Midwest grain and agriculture shippers with improved barge service. To that end, APH is expected to initially deploy four container barges capable of carrying between 1,700 and 2,300 TEU.

Building a new terminal and barges, along with rail ties and road improvements, are initially expected to bring the project’s cost to about $5 billion, Fetters said. That could grow with new warehousing and other investments at the port’s other 8,000 acres of space.

Fetters, whose firm has helped develop energy terminals at Plaquemines, is tasked with approaching infrastructure funds and other private capital to help pay for various phases of the project, which he says will offer investors a double-digit return due to the fact it’s being built from scratch.

“We can negotiate new rules in labor and automation, so we can apply technologies that are implemented globally,” Fetters said.