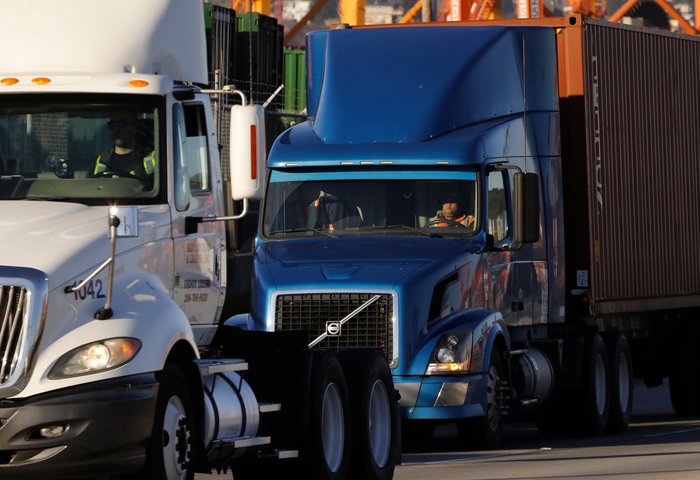 The Northwest Seaport Alliance on Tuesday reached a compromise with drayage truckers that maintains an April 1 implementation date banning trucks with pre-2007 engines. The deal also grants continued access to marine terminals until the end of the year to non-compliant truckers if they are in the process of purchasing a clean truck.

The port commissioners, known as the Managing Members, set a firm deadline of Dec. 31, 2018, requiring 2007 or newer trucks or engines with approved retrofits. Drivers, many of whom are owner-operators, had threatened a strike Tuesday that never took place. More importantly, the port commission headed off future job actions and should assure sufficient drayage capacity in the port complex for the long term.

“All our members needed was a date,” said Ian Collins, president of the intermodal conference of the Washington Trucking Association. Now that the date is firm, a number of owner-operators will begin the process of securing a compliant vehicle, and that should ensure sufficient truck capacity in the harbor going forward, he said.

Although the clean-truck mandate was announced in 2008 with an implementation date of Jan. 1, 2018, a number of truckers dragged their feet, apparently hoping that they could get the ban lifted or delayed. In January they achieved a partial victory by receiving a 90-day extension until April 1.

Even today, only 53 percent of the approximately 4,500 drayage trucks calling in Seattle and Tacoma are compliant. The non-compliant truckers were banking on a lengthy extension. The drayage community was split on this topic, with those truckers who had invested in costly new vehicles saying a postponement would put them at a disadvantage with those allowed to drive old, polluting trucks.

The Managing Members approved a plan in which the April 1 deadline stands. The non-compliant truckers who produce evidence of being in the process of purchasing a 2007 or newer vehicle will be granted a pass until the end of the year. At that time, though, all non-compliant trucks will be banned from marine terminals.

Seattle, Tacoma, and Vancouver, British Columbia, in 2008 adopted the Northwest Ports Clean Air Strategy, with one of the goals being to ban pre-2007 trucks from the ports on Jan. 1. Seattle and Tacoma have invested more than $15 million in grants to help truckers purchase compliant vehicles.