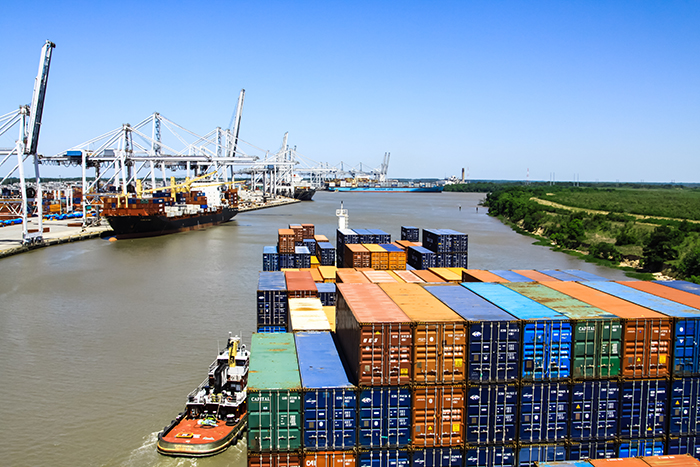 The port of Savannah handled 1.4 million TEU of imports from Asia last year, an 11 percent increase from 2017, according to PIERS. Photo credit: Shutterstock.com.

The ports of Savannah and Houston in 2018 saw the sharpest growth in imports from Asia among the 10 largest US gateways. Throughput of Asian imports expanded 11 percent at Savannah compared with 2017, while Houston’s volume surged 19.6 percent, albeit from a smaller base, driving a broader bleed of inbound goods from the West Coast to the East Coast.

Griff Lynch, executive director of the Port of Savannah, noted that most US gateways reported solid growth in import volumes in 2018, due in part to the front-loading of spring merchandise to avoid threatened tariffs on imports from China originally scheduled to take effect on Jan. 1. Savannah benefitted particularly from a 19 percent increase in intermodal rail traffic. “That’s a trend that is continuing,” he told JOC.com on Wednesday. Like other East Coast ports, Savannah is investing in intermodal rail infrastructure as it seeks deeper penetration into the US interior.

It was a banner year for all major US cargo ports, as containerized imports from Asia mounted an unusual surge late in the year because of threatened 25 percent tariffs on imports from China that had been scheduled to take effect on Jan. 1, 2019. For all of 2018, US imports from Asia surged 7.5 percent year over year to 16.8 million TEU. Imports coming in through East Coast ports rose 9.1 percent to 5.3 million TEU, while imports flowing to the West Coast grew 5.8 percent to 10.8 million TEU and those handled by Gulf Coast gateways jumped 21.7 percent to 694,485 TEU, according to PIERS, a JOC.com sister product within IHS Markit.

The four busiest ports in the country each handled more than 1 million TEU of laden imports from Asia, and together they accounted for 68.5 percent of all US containerized imports from Asia. Savannah was the fastest growing of the four, followed by New York-New Jersey at 8.2 percent, Long Beach at 6 percent, and Los Angeles at 5.3 percent.

These gateways benefit from a critical mass of container volume that attracts import distribution facilities, multiple eastbound trans-Pacific services each week, and more frequent intermodal rail options. In addition, the mega-ships now operating in the trade generate the large import discharges that are necessary to fill trains destined for key inland markets such as the mid-South, Ohio Valley, and Chicago, Lynch said.

Imports in the eastbound trans-Pacific surged 21.8 percent in December because of front-loading of 2019 spring merchandise to get ahead of the Jan. 1 tariffs, which have since been delayed as US and Chinese negotiators attempt to de-escalate trade tensions. Import volumes increased so rapidly last autumn that carriers deployed dozens of extra-loader vessels from Asia, including 34 extra-loader vessels to Los Angeles-Long Beach alone.

The top five ports for Asian imports continue to separate themselves from other gateways, outdistancing those ports by a factor of at least two to one in laden containerized imports. Los Angeles in 2018 handled 4.6 million TEU, Long Beach 3.7 million TEU, New York-New Jersey 1.9 million TEU, Savannah 1.4 million TEU, and the Northwest Seaport Alliance, the operating partnership between the ports of Tacoma and Seattle created in 2016, handled 1.3 million TEU. By comparison, the port of Oakland handled 711,619 TEU, Norfolk 659,583 TEU, Houston 522,769 TEU, and Charleston 475,999 TEU.

The eastbound trans-Pacific is not only the largest but also the most competitive of the US trade lanes because ports on all three coasts handle consumer merchandise from Asia that is destined to major inland population centers. The region that extends from the Ohio Valley and Chicago to the mid-South is increasingly in play for both East and West coast ports, as well as Vancouver and Prince Rupert, Canada, which offer intermodal service to the US interior via the Canadian National and Canadian Pacific railroads.

A key requirement for expanding a gateway’s intermodal rail hinterland is to attract first-call inbound ocean services from Asia with mega-ships having capacities of 14,000 TEU. “We couldn’t do it in the past. We didn’t have the mega-ships. You need density to make it work,” Lynch said. Savannah has 10 weekly first-call inbound services from Asia.

Another important factor in reaching markets from the mid-South to Chicago is an efficient hand-off of intermodal containers from the ports to trains, through expansion of near-dock rail infrastructure and development of inland rail hubs. Charleston in 2013 opened an inland rail terminal at Greer, South Carolina, and last year opened a similar facility in Dillon, South Carolina. “We were looking for a scalable, reliable solution. There has been a dramatic improvement in cycle time,” Jim Newsome, CEO of the South Carolina Ports Authority, said at the 2019 TPM Conference in Long Beach.

Savannah in late 2019 will complete the first phase of a $128 million project to expand intermodal capacity at the Garden City terminal so that CSX Transportation and Norfolk Southern Railway will be able to build full unit trains at the terminal. The second and final phase will be completed in 2020. Lynch said it will take Savannah a couple of years to fully benefit from the mega-rail project. “It’s not an overnight play,” he said.

The West Coast remains the largest gateway for Asian imports due to all-in transit times to interior US markets via intermodal rail that are 10-14 days faster than on the other coasts. West Coast ports are highly dependent upon rail, with more than two-thirds of their total volume moving via intermodal rail to the eastern half of the country, compared with about 40 percent for East Coast ports, according to the Intermodal Association of North America. However, recognizing the growth potential inherent in intermodal, East Coast ports are expanding their on-dock and near-dock rail infrastructure to expedite shipments to the interior.

On the East Coast, where distances to major consuming markets are shorter, ports in the past concentrated on serving the large population centers on the eastern seaboard. They also have a cost advantage in serving the eastern seaboard cities because their all-in transportation costs are lower than the combined ocean-rail costs via West Coast ports. West Coast ports have also suffered from a steady decline in market share since the labor disruptions during the coastwide longshore contract negotiations of 2002, which incentivized large national retailers to establish import distribution centers near the East Coast ports.

The largest US gateways for Asian imports appear poised to continue outpacing other ports as carriers order ever larger vessels. Lars Jensen, CEO and co-founder of SeaIntelligence Maritime Consulting, said at the TPM Conference that in this era of mega-ships, carriers are reducing the number of service options or port pairs that they connect. This will favor the larger gateways at the expense of transshipment ports, Jensen said.