Ports Urged to Plan Ahead for Power Needs

Ports Urged to Plan Ahead for Power Needs 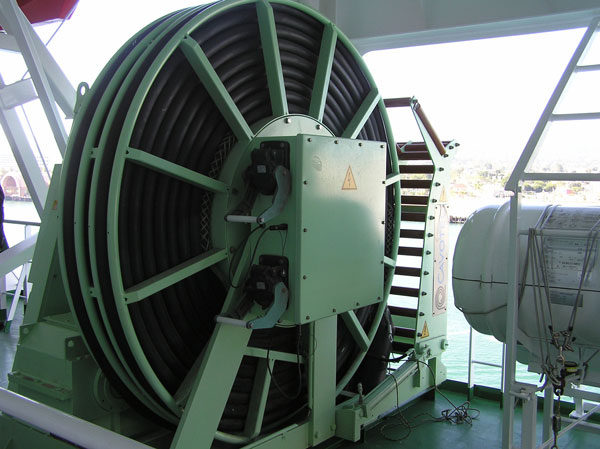 Port authorities should be preparing now for the demands they will make on local power grids as terminals automate their operations and shipping lines plug their vessels into shore-side electrical power while at berth.

The ports of Los Angeles, Long Beach and Oakland on Jan. 1, 2014, will provide the industry with a sneak preview of what the electric-powered port of the future will look like. That is when the California Air Resources Board alternative maritime power regulation for vessels at berth will take effect.

Vessels at berth will have to shut down their auxiliary engines and operate from shore-side electrical power. The AMP requirement begins at 50 percent of a carrier’s vessel calls, and rises to 70 percent in 2017 and 80 percent in 2020.

California is the only location in the world with an AMP requirement for container ships, but countries in Europe and Asia have asked the Southern California ports to share their shore-side power plans with them, said Ben Chavdarian, senior electrical engineer at the Port of Long Beach.

Port executives in Germany and South Korea believe it is just a matter of time before pressure from environmental interests results in AMP requirements in those countries, he told the Propeller Club of Los Angeles-Long Beach on Friday.

Ocean carriers in recent years have placed orders for dozens of large vessels, and they routinely plan now for AMP capacity in the new ships, said Dave Arsenault, vice president of Hyundai Merchant Marine. Designing AMP capacity into a vessel costs much less than retrofitting an existing vessel, he said.

The Southern California port complex spends about $50 million a year on electric power. That expenditure is expected to increase greatly in the coming years, Arsenault said. The AMP requirements will contribute to the increased electrical power consumption, but automation of marine terminals will generate demand for electrical power that is almost three times the demand generated by vessels plugging in at berth, he added.

Three of the 13 container terminals in the port complex have announced plans for automation. Electric quay cranes, automated guided vehicles to move containers from vessels to the stacks, automated stacking cranes and automated on-dock rail operations will result in much greater demand for electrical power. Most terminals in Los Angeles-Long Beach are expected to implement some degree of automation.

Marine terminals are fed much more power than they actually use. For example, a number of reefer plugs may go unused. Working with safety code enforcers to eliminate some electrical transformers in order to reduce usage to 65 percent of current demand can produce millions of dollars of savings over time. Chadarian said his analysis of electricity records indicates some terminals could operate safely at 40 percent of current demand.