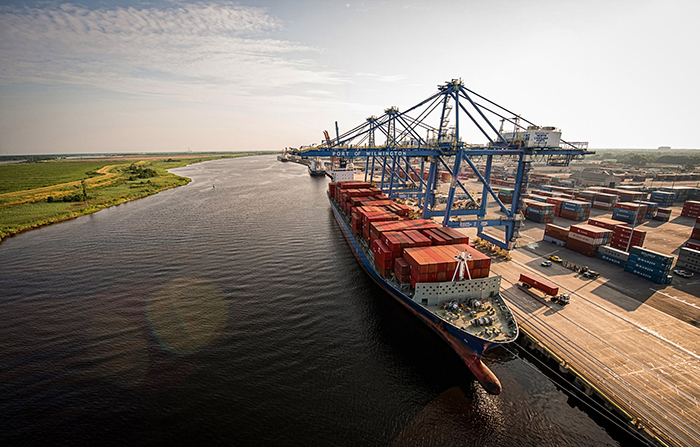 The Port of Wilmington is unique among ports in a USDA cold treatment shipping program. Photo credit: NC Ports.

The Port of Wilmington, North Carolina, joins fellow US East Coast ports in taking aim at South American perishables by becoming the first southeast port to complete the refrigeration process on the dock.

Although other southeastern ports the in US Department of Agriculture’s (USDA's) In-Transit Cold Treatment Pilot program can accept goods that have completed the two-week refrigeration process, Wilmington is the first to be able to accept goods that are still midway through the process and then complete the refrigeration in the terminal, North Carolina Ports said.

Wilmington’s reefer imports rose 3.4 percent year over year in 2016 to 539 TEU, according to PIERS, a sister product of JOC.com. Through the first three quarters of 2017, reefer import volumes rose 18.6 percent to 495 TEU, from the same period in 2016, the figures show. Although the cargo volume is small, that increase was considerably faster than the 7.3 percent growth in US reefer imports compared with the period in 2016.

The US Department of Agriculture, from Dec. 1, added Wilmington to its In-Transit Cold Treatment Pilot program, which was started in 2013 and allows cargo to enter the participating ports after undergoing a two-week cold treatment process to safeguard against shipments bringing in fruit flies and other pests.

“We have been working hard to get this program approved,” said Paul J. Cozza, executive director of North Carolina Ports. “Demand from our customer base is very strong and they wanted to see this capability for Wilmington move forward.”

Wilmington has been struggling to recover cargo volumes lost in the collapse of Hanjin Shipping just over a year ago.  The port handled 122,619 TEU in the first nine months of this year, 28.8 percent lower than the same period in 2016.

Even before that, however, the port was struggling with its market share. The port’s share of loaded East Coast cargo had shrunk from 1.7 percent in 2010, to 1.4 percent in 2016.

Wilmington joins Miami, Virginia, South Carolina, Port Everglades, Tampa, Jacksonville, Port Manatee, and Savannah in the In-Transit Cold Treatment Pilot program. It enables shippers to send the cargo through southeast gateways rather than through northeast ports as was previously the case. On the Gulf Coast, Gulfport, Mississippi, and Corpus Christi, Texas are, like Wilmington, able to refrigerate goods at the terminal, the USDA said.

Other southeastern ports can only accept goods that have completed the two-week refrigeration program, said Stephanie Welch, spokesperson for the Port of Wilmington. The port is the first in the southeast to get a designation of phase one and two, which allows partly refrigerated goods to be unloaded at the port and the completion of the refrigeration process there.

That ability “opens up a totally new dimension for our port and an option for importers to complete treatment after discharge, which is unique in the south and mid-Atlantic and only available at the Port of Wilmington at this time,” said Hans Bean, vice president of trade and development, North Carolina Ports.

The port expects the designation to increase the number of direct imports of produce from across the Americas more than ever before, including fruits such as blueberries, grapes, apples, pears, and citrus.

Even before the cold-treatment designation, port officials were optimistic that the port’s fortunes were ascending. Port officials hope that a new route to Central America operated by Crowley Maritime Corp. that began in November — a weekly, fixed-day service to Guatemala and Honduras — will help recover the cargo volume lost to Hanjin.

The Crowley service follows the addition of two trans-Pacific services and a Central America-to-Europe service in the last five months. Port officials said in November they believe the new services and restoration of intermodal rail earlier this year will, by June, raise the port’s volume 50 or 60 percent above where it is now.

Port officials said Wilmington has ample refrigerated container capacity, with almost 300 plugs on terminal and the capability to add more. In addition to Wilmington’s reefer capacity, the port is also home to a 101,000 square foot refrigerated warehouse located on terminal — one of only a few in-port cold storage facilities in the country.