North Carolina's Wilmington to be 14,000-TEU ship ready in March

North Carolina's Wilmington to be 14,000-TEU ship ready in March 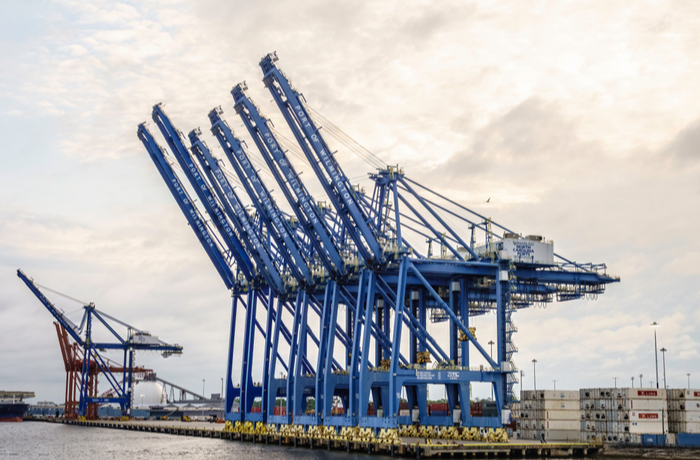 As part of its $200 million infrastructure improvement plan, an expansion of the port’s refrigerated container yard will be completed in April, tripling its reefer storage capacity to 1,000 plugs. Photo credit: Shutterstock.com.

The Port of Wilmington, North Carolina, is a step closer to being able to handle 14,000-TEU ships after the raising of electricity transmission lines in December.

With the expected March completion of a project to widen the port’s turning basis, the port will be able to boost its handling capabilities that are currently capped at 12,000-TEU ships. The six weekly container services calling the port deploy ships ranging in size from 8,500 TEU to 12,000 TEU, according to North Carolina Ports.

“Not only does it open the Port of Wilmington to some of the largest ships calling on the United States East Coast, but it allows NC Ports to better support the needs of its customers,” Brian E. Clark, chief operating officer of North Carolina Ports, said in a statement.

In the first 11 months of 2019, laden container volume through the port fell 6.2 percent year over year, to 232,537 TEU, according to PIERS, a sister product of JOC.com within IHS Markit. US East Coast ports saw average growth of 7 percent in the same period.

As part of its $200 million infrastructure improvement plan, an expansion of the port’s refrigerated container yard will be completed in April, tripling its reefer storage capacity to 1,000 plugs. Soon after, work will begin on upgrading the container gate complex and the deployment of a new terminal operating system, both of which are set to be completed by the end of the year. Ultimately, the investment will double the port’s annual capacity to 1.2 million TEU.

Initial work on widening the turning basin from 1,200 feet to 1,400 feet was completed in 2016. The second phase of the project will further widen the basin to 1,524 feet, according to North Carolina Ports.

“When you couple the completion of the turning basin with our berth enhancements and lack of congestion, North Carolina Ports will continue to offer superior vessel productivity for any sized vessel calling the East Coast,” said spokesperson Bethany Welch.

In December, North Carolina and Wilmington were recognized as the most productive among “small ports and terminals,” those defined as having an average call size — the number of containers loaded and unloaded during each ship call — of less than 1,500. The recognition was based on JOC.com’s analysis of berth productivity at North American ports and marine terminals in 2018.

However, the wider basin won’t ease navigation restrictions that prevent larger ships from calling the port during low tide. The port plans to deepen its harbor from 42 feet during low tide to 47 feet, but that’s still in the early stages, with feasibility studies yet to be completed.

In a May 2019 interview, Paul Cozza, CEO of North Carolina Ports, told JOC.com he doesn’t believe tidal restrictions will be necessary at 47 feet, even though the general recommendation to handle a post-Panamax container ship is 50 feet based on vessel drafts. Without enough draft, a post-Panamax vessel could scrape the bottom of the harbor and damage its hull.