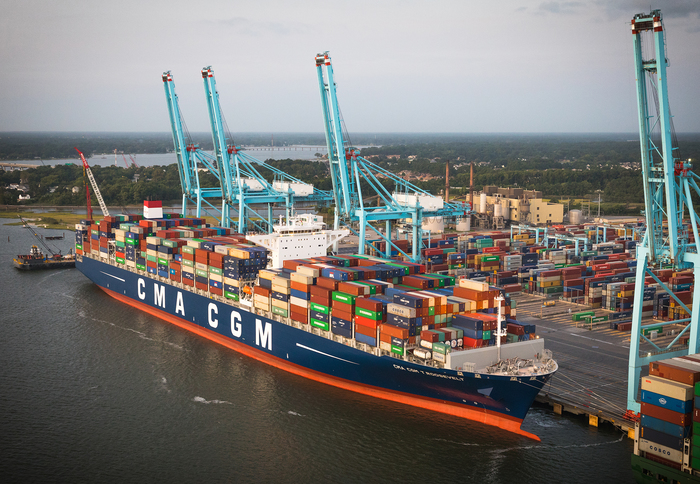 Dredging on the western part of the Thimble Shoal Channel will begin in January 2020, one of the first steps in a larger project to deepen the Elizabeth River into Virginia's main container terminals. Photo credit: Port of Virginia.

Dredging will begin in January in Norfolk as part of a $350 million project that will result in the Port of Virginia having the deepest harbor on the US East Coast by the end of 2024.

The port inked a contract this week with dredging company Weeks Marine, taking the first step in eventually being able to handle ships up to 18,000 TEU by deepening the western section of the Thimble Shoal Channel to 56 feet. The port can now handle 14,000 TEU vessels through the 50-foot section of Thimble Shoal and the inner harbor of the Elizabeth River.

The four-year project will allow the port to handle larger ships traversing the Suez Canal and position it to benefit from a possible future expansion of the Panama Canal.

As manufacturing shifts to Southeast Asia from China, East Coast ports are looking to see how they can attract such services, in which ships with capacities of 22,000 TEU are deployed. The expanded Panama Canal locks allow ships as large as 15,000 TEU, and its port authority is determining whether even larger locks are needed.

The $75 million contract with Weeks Marine only covers the western Thimble Shoal Channel portion; it does not include dredging the Elizabeth River — used to dock at Virginia International Gateway (VIG), Norfolk International Terminals, and Portsmouth Marine Terminal — to 55 feet. That contract will be awarded at a later date.

Virginia, Baltimore, Miami, and New York are all currently tied for the deepest port on the East Coast, at 50 feet. Charleston will have bragging rights as the deepest harbor at 52 feet between 2022-24.

The second critical part of Virginia’s project is to widen the Thimble Shoal Channel to 1,400 feet, a fix to address the fact that only one post-Panamax vessel can enter or exit through the canal at the same time.

“The vessel sizes continue to expand, so safe, two-way traffic is important to the sustainability and efficiency of this port and to the ocean carriers using the channel,” Virginia Port Authority CEO John Reinhart said in a statement.

Virginia’s dredging project is just one of several meant to keep pace with the upsizing of container vessels calling the US East Coast. The Florida Department of Transportation recently appropriated $35.3 million to help fund a $484 million project to deepen 11 miles of the Jacksonville Harbor to 47 feet. A $973 million project to dredge the Savannah Harbor to 47 feet is due to be completed next September. And Charleston’s $558 million deepening project to 52 feet should be completed in 2022. The Charleston and Savannah projects moved forward in August when the Army Corps of Engineers awarded contracts to Norfolk Dredging.

The Port of Philadelphia recently completed deepening to 45 feet, while other proposals are under consideration — the Port of Boston has proposed to dredge to 47 feet, Everglades to 48 feet, and New Orleans to 50 feet.

Reinhart said at the State of the Port address in April that Virginia’s dredging will be complete by the end of 2024. The federal government will contribute $195.4 million to the project.

Earlier this year, the Port of Virginia completed renovations to expand annual throughput at VIG by going from 15 container stacks to 28 stacks. VIG’s expanded intermodal rail yard was also finished, which allows CSX Transportation and Norfolk Southern Railway to build 10,000-foot trains that should shorten the container dwell time between vessel discharge and placement on a train.

Construction is ongoing to double the size of the Norfolk International Terminals container yard. Until now, NIT had 15 container stacks using manually operated cranes. It will eventually have 30 stacks with semi-automated cranes, 18 of which will be in place shortly.

Through September, laden volume in Virginia had climbed 2.6 percent to 1.76 million TEU compared with the year-ago period. Laden imports were up about 6 percent, while laden exports had fallen nearly 2 percent, according to PIERS, a sister product of JOC.com within IHS Markit.

Global Shipping Outlook: A Sneak Peek at 2021
Port Performance North America: Managing Cargo Flow During a Pandemic — and Beyond
END_OF_DOCUMENT_TOKEN_TO_BE_REPLACED