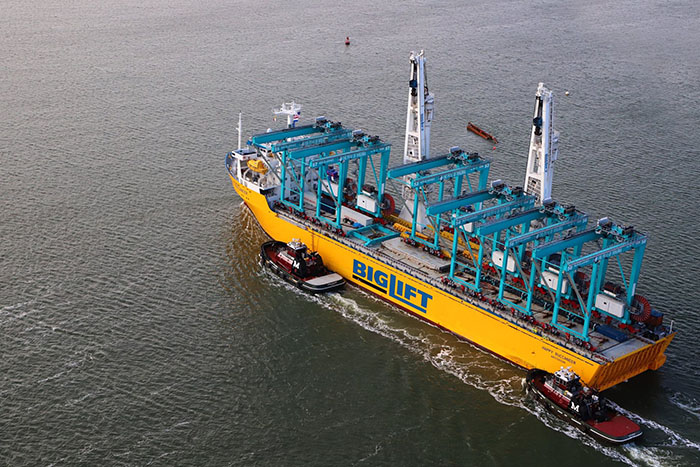 Virginia state lawmakers ended their legislative session on March 10 without an agreement on a two-year budget, delaying a decision on funding work to dredge at the Port of Virginia for at least a few weeks.

The House of Delegates budget appropriated $350 million to cover the state’s portion of the $670 million total to deepen and widen the channel in Norfolk, Virginia. The Senate version included $20 million for planning and engineering but did not include bond authorization for the remaining $330 million.

The special session in Richmond, Virginia, should not impact the next steps in the federal approval process. The US Army Corps of Engineers ruled in January that the dredging project has national economic benefits, qualifying it for funding. The Chief of Engineers report in June will determine whether the corps will allocate money in its next fiscal budget to the project.

“We feel very optimistic about the $20 million in both the Senate and House versions for the preliminary engineering and design to get started later this spring. We also remain hopeful that as they come out of the special session, we will have the larger funding outlined in the House version for the remaining $330 million, so we can push this dredging project even quicker by showing the state’s commitment to get the federal funding,” said John Reinhart, Port of Virginia executive director.

Virginia lawmakers tabled any discussion about how to proceed with the port after reaching an impasse over whether to expand Medicare coverage to nearly 400,000 eligible Virginians.

The Port of Virginia and the corps are working together to deepen the Norfolk Harbor and Thimble Shoal channels to 55 feet during low tides and deepen the southern branch of the Elizabeth River to 45 feet. Like ports up and down the coast, Virginia is preparing to handle ships of up to 15,000 TEU.

Southeast US ports are already seeing more 10,000 to 15,000 TEU vessels and will likely see more as ocean carriers replace them on Asia-to-Europe routes with 22,000 TEU vessels, industry analysts predict.

The depth of 55 feet would make Virginia the deepest harbor on the US East Coast, ahead of the 52-foot depth Charleston is currently working toward, and the depth of 50 feet found at the ports of Miami, New York and New Jersey, and Baltimore. The deepening of the port of Savannah is slated to be completed in January 2020, bringing the depth of the inner harbor to 47 feet and the outer harbor to 49 feet during low tides. The corps has also approved money to dredge to 47 feet in Jacksonville, aiming to complete the work by 2021, and for the Port Everglades, Florida, to deepen its draft to 48 feet. Right now, Virginia is targeting 2024 as a rough target date for its deepening.

The project will also widen the Virginia ship channel from 1,000 to 1,300 feet east of the Chesapeake Bay Bridge-Tunnel, enabling uninterrupted service. Currently when a post-Panamax vessel passes through the harbor, there is a temporary closure of the channel to all other commercial traffic to ensure the vessel can effectively traverse the waterway.

Total laden traffic at the Port of Virginia rose 4.8 percent year over year in 2017 to 2.2 million TEU, faster than the national increase at 4.2 percent, according to PIERS, a sister product of JOC.com. Laden import volume rose 6.8 percent to 1.2 million TEU, slightly ahead of the 6 percent expansion of US import volume, while exports rose 2.3 percent to 955,813 TEU, ahead of the 1.2 percent increase in US exports as a whole.

“Our goal is to become one of the best safe harbors on the East Coast of the United States, a true gateway to global trade that is not impeded by natural limitations such as water depth. Along with work of infrastructure across our terminals and efficient rail and road networks, we’re just trying to set the table for a very efficient Mid-Atlantic gateway to help drive economic opportunity for Virginia,” Reinhart said.

The ports in Charleston and Norfolk will not be receiving new weekly services in 2018 like Savannah and Jacksonville, but THE Alliance East Coast 4 Loop to the four locations will be upsized to 13,000 TEU vessels. THE Alliance consists of Hapag-Lloyd, Ocean Network Express (a merger of “K” Line, MOL, and NYK Line), and Yang Ming Line.

Savannah will have 38 weekly container services, Norfolk will have 33, and Charleston 26 this year.