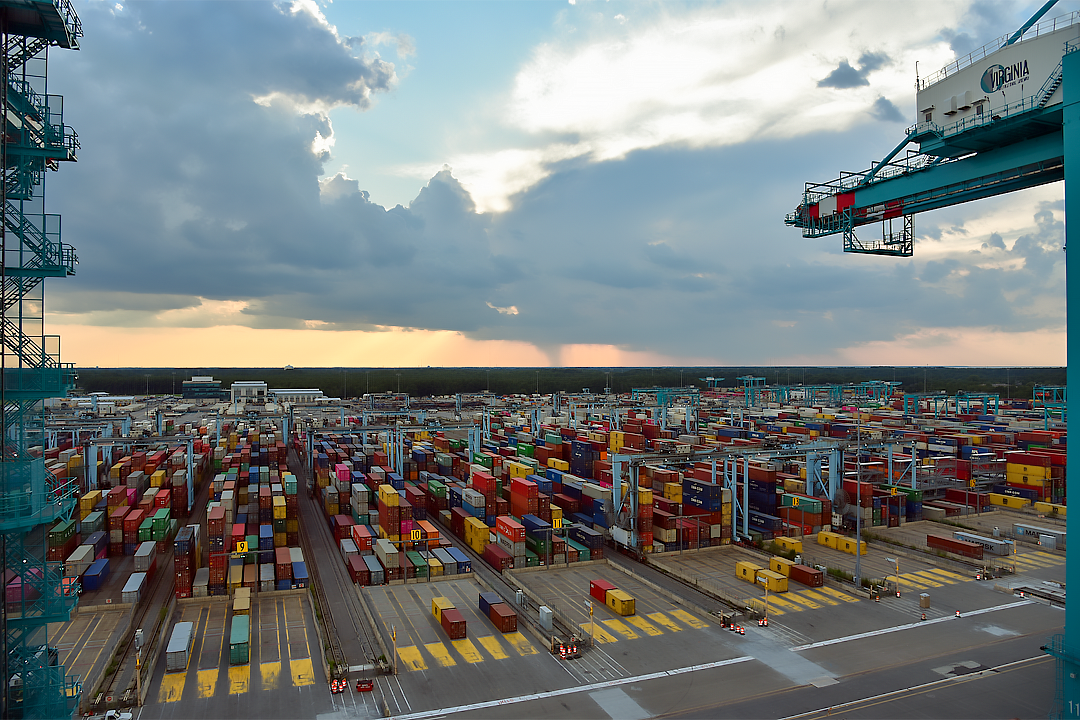 The Port of Virginia has been renovated and modernized in the six years under CEO John Reinhart, who announced his retirement Tuesday effective March 2021. Photo credit: Mariusz Bugno/Shutterstock.com.

John Reinhart, CEO of the Virginia Ports Authority, will retire from his post in March 2021, ending a tenure he says has left the port in a stronger financial position and with a competitive plan to gain more discretionary cargo.

His resignation, announced Tuesday, caps his six years at the port in which he has overseen the modernization and expansion of the third-largest US East Coast port’s two main container terminals; cleaning up the port’s financial position and rallying the state around the port.

New ship-to-shore cranes in both terminals have made it possible to handle six neo-Panamax vessels simultaneously in the two terminals. New gantry cranes have increased the number of container stacks, allowing the port to handle nearly twice the number of boxes.

A dredging project will deepen the Norfolk inner harbor to 55 feet, capable of supporting 18,000 TEU vessels should they ever be placed on routes to the East Coast, and widening the channel to allow two large vessels to pass side-by-side, eliminating a chokepoint right now.

VIG’s railyard was also expanded to build 10,000-foot trains to reduce the dwell time between containers leaving a vessel and going inland on a train. A trucker appointment system was introduced in 2018 and turn times have since dropped to less than 50 minutes on average in both terminals.

The Port of Virginia “has made tremendous progress during the past six years and we should be proud of what we have accomplished. Our brand is solid, our values guide us and our hard work continues to earn the respect and trust of our customers, partners and stakeholders,” Reinhart said in a statement. “This port is going to be an economic force in Virginia for decades to come.”

Truck drivers have leveled gripes in recent years about turn times, appointment systems, and equipment breakdowns, but Reinhart navigated the turbulent waters by bringing all drivers, trucking executives, BCOs, and other stakeholders together to listen and discuss solutions.

Turning around a fledgling port

When Reinhart took the reins in 2014, the Port of Virginia was chronically losing money and politicians were debating whether to lease the property to a third-party terminal operator.

Reinhart said one of his first jobs was to prove to Governor Terry McAuliffe and lawmakers in the General Assembly in Richmond that his team was capable of turning things around.

“We were operating at a disadvantage and had to regain our competitiveness. The only way to do it was to develop an investment plan and get to work on building a twenty-first century port,” Reinhart said. “We had to demonstrate to the governor and General Assembly two things: that we were a highly competent team of experienced, creative, and capable long-term thinkers and that investing in the port will hold benefits for Virginia’s economy for decades to come.”

What followed was a major investment in the landside and waterside capabilities of Virginia afforded to ocean carriers, truckers, and BCOs.

“Upon arrival, he focused first on stemming the port’s financial losses and on restoring its credibility in the marketplace. He then reinvented the port from the bottom up and rebuilt its terminals into modern, semi-automated facilities able to handle the largest vessels calling on the East Coast,” said John Milliken, chairman of the VPA board, in a statement.

Since Reinhart’s arrival in 2014, the Port of Virginia has grown its total cargo volume at a compound annual rate of 2.1 percent, lower than the 3.5 percent growth rate for the US East Coast as a whole, according to PIERS, a sister product of JOC.com within IHS Markit.

The majority of funds in Reinhart’s $1.5 billion capital spending program went to increasing the capacity of VIG and NIT, both in terms of container yard storage and capabilities to handle post-Panamax vessels.

NIT’s expansion project, totaling about $375 million, is due to complete before the end of this year. The port authority will replace 15 stacks with manual cranes to 30 stacks controlled by the semi-automated cranes used in VIG. The final 12 stacks are the last touch on the project.

To maximize the container yards, Virginia has built up its dockside capacity to handle the largest vessels. Four cranes put into service last year can lift 170 feet high, which the port authority has said is the tallest in North America.

With more than 30 post-Panamax cranes across all container terminals, Virginia can handle six 14,000 TEU vessels simultaneously, although such an event would be easier to pull off after dredging and channel widening is completed.

The final cog in Reinhart’s capital expense project is $350 million to deepen the inner harbor to 55 feet, the deepest on the US East Coast, and widen the channel to 1,400 feet in specific areas by 2024. The widening is key because it will allow two ultra-large container vessels to pass one another, eliminating a chokepoint. The first work began in January after the Port of Virginia awarded a $78 million contract to Weeks Marine for deepening the western side of the Thimble Shoal Channel.

Reinhart’s final months in office will be tough as he shepherds the port authority through a global economic recession sparked by the COVID-19 pandemic. In the first quarter, Virginia’s traffic fell 5.1 percent, while traffic on the East Coast as a whole fell 2.6 percent, according to PIERS.

Virginia port officials have said they will seek federal financial support during this turbulent time, while also slashing operational costs.

VPA has cut back gate hours on both ends of the day, now opening at 7 a.m. and closing at 5 p.m. with no weekend hours. A couple years ago, terminals opened as early as 3 a.m., and closed at 6 p.m., but hours were trimmed after a terminal appointment system reduced congestion in the morning, and further cut when volumes plunged in March and April.

In addition, the Portsmouth Marine Terminal was idled earlier this month, with two of the facility’s three weekly calls shifting to Norfolk International Terminals and the other to Virginia International Gateway.

Reinhart told JOC.com last month that his job is to be fiscally responsible during the COVID-19 recession, while also providing strong service and terminal fluidity during what will likely be a slow, uneven recovery.