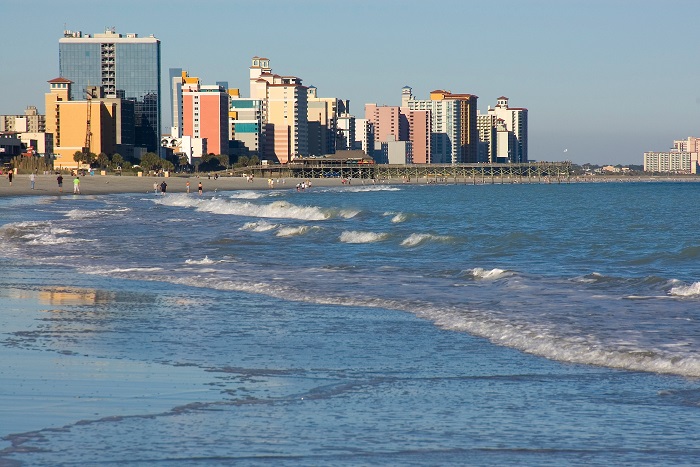 Whether shippers moving goods through the US Southeast and Mid-Atlantic see delays and elevated truck rates for days or for weeks largely hinges on exactly where Hurricane Florence makes landfall and with how big of a wallop. (Above: Myrtle Beach, South Carolina, United States.) Photo credit: Shutterstock.com.

Whether shippers moving goods through the US Southeast and Mid-Atlantic see delays and elevated truck rates for days or for weeks largely hinges on exactly where Hurricane Florence makes landfall and with how big of a wallop. The impact may be magnified by US freight markets already stretched thin thanks to the strongest US economic growth since 2014.

If Florence weakens, the storm’s impact may be limited to a smaller region and a few days of disruption. A Category 4 hurricane, which is what Florence became by Monday afternoon, could do much greater damage in the Southeast and Mid-Atlantic, and send truck spot market rates up sharply — just as the peak pre-holiday shipping season ramps up across the United States.

Florence raises a question: after a year of natural disasters, from hurricanes in 2017 to fires and floods in 2018, are shippers doing enough to prepare their supply chains?

The last major storm to hit North Carolina, Hurricane Matthew, was a comparatively weak Category 1 hurricane when it landed on Oct. 8, 2016, but extreme rainfall and flooding caused road closures and other disruptions for weeks, with damages totalling $10.3 billion. Even truck traffic on I-95, the major north-south trade artery on the East Coast, was interrupted.

Ports, counties, cities, and towns along the US East Coast aren’t waiting quietly for Hurricane Florence, and neither should shippers. Evacuations have already been ordered in North Carolina, now that Florence has intensified to a Category 4 hurricane with winds blowing as high as 130 miles per hour. The storm is expected to hit the US Southeast Thursday or Friday.

Storm may disrupt operations for days, if not weeks

The hurricane’s effect won’t be limited to immediate storm damage and cleanup, however. A storm of this magnitude could disrupt freight operations for days if not weeks, especially if forecasts of days of heavy rain in the Mid-Atlantic prove accurate. Rain-soaked ground and rivers in Virginia, Maryland, and as far north as Pennsylvania are prone to flooding.

Shippers far from the Atlantic Coast will feel an impact from delays of goods moving through ports along the East Coast and temporarily broken rail and truck connections. It may take days for trucks that have been moved out of the area to safety to re-enter some of the hardest-hit regions in the wake of the storm, as was seen in the wake of Hurricane Harvey last year.

And as was the case with Hurricane Irma in Florida, fuel supply could be an issue in some areas, if Hurricane Florence proves as destructive as expected. The storm’s impact on truck pricing could be even more widespread, although perhaps not long-lasting. Last year, Hurricane Harvey’s August hit on Houston helped send truckload spot rates soaring in September.

Florence’s impact on transportation and transportation pricing depends on its severity and how broad a region the hurricane eventually affects. Hurricane Sandy set a precedent, bringing severe infrastructure damage and power outages from the Mid-Atlantic to New England. But the storm comes at a time when US transportation resources are already stretched thin.

Economic expansion has strapped truck capacity, pushing up truckload rates by double digits. Rates that rocketed after Harvey are still rising, propelled at first by relief demand in the Southeast last autumn but then by strong consumer and manufacturing demand. US real GDP expanded 4.2 percent in the second quarter, according to the latest estimate.

That means even less of a cushion to absorb any economic shock. Diverting available truck capacity to hurricane relief and reconstruction efforts in the wake of Florence will impact other freight rates, as trucks are siphoned from other lanes to the Southeast at a time when the autumn peak shipping season for the trucking and intermodal rail industry is getting under way.

Shippers in the storm’s projected path, or with freight moving through it, should already be looking for alternative routes for freight that otherwise could be stranded in the Southeast and for warehousing sites further inland if inventory needs to be moved this week. Few trucking companies have posted weather alerts yet, but UPS is “closely monitoring” conditions.

South Carolina, North Carolina, and Virginia declared states of emergency to get evacuations under way where necessary and better position relief resources where needed. If Florence comes ashore in North Carolina as a Category 4 hurricane, it will be the strongest hurricane on record to come ashore that far north, according to the US National Hurricane Center.

North Carolina State Ports Authority terminal in Wilmington — which looks likely to be Florence’s port of arrival — is extending container gate hours until 7 pm for pickups and drop-offs Monday and will be open only for pickups Tuesday. “The Port of Wilmington and the Port of Morehead City are currently at Condition Whiskey,” the port authority said on Facebook Monday.

Condition Whiskey means a hurricane is expected to make landfall within 72 hours. “Based on anticipated winds and the potential for heavy rains and storm surge, empty container stacks are being block stowed, loaded containers are being relocated within the port, generator power is being prepared for refrigerated cargo, and warehouses and transit sheds are being secured.”

The port is expected to close sometime Wednesday afternoon, and other ports south and north of Wilmington, from Savannah and Charleston to Norfolk, are taking similar steps. US Navy ships were ordered to leave Hampton Roads, Virginia, as the storm approaches. The Ports of Virginia were preparing for the worst, while hoping for the best, a port official said.

Port of Virginia: a focus on safety

“The focus of our plan is the safety of our people, and to get our terminals prepared,” Joe Harris, spokesperson for the Port of Virginia, said Monday. “The prep work is significantly important in helping the recovery effort. That effort could take no time at all, if we don’t get hit,” said Rich Ceci, senior vice president of technology and projects for Virginia International Terminals.

By late Monday, the Port of Virginia announced all port activities would come to a hard stop as of 11:59 pm Tuesday, Sept. 11, with all truck gates closing at normal posted hours.

Few trucking companies have posted weather alerts yet, but past experience will have those carriers moving equipment to higher ground, further inland. With several days’ warning, those carriers will have more time to decide where best to position trucks, trailers, and goods in storage to help customers in the storm’s path before Hurricane Florence arrives.

Railroads have less flexibility when it comes to the ability to quickly move equipment, and have begun curtailing some Southeastern operations already. Effective 6 pm Monday, Norfolk Southern Railway said it will stop accepting intermodal shipments at all origin locations destined to Norfolk (Portlock), Norfolk International Terminal, and Virginia Inland Gateway.

“Norfolk Southern will be issuing embargoes for affected locations,” the railroad said on its website. “Traffic en route to these locations will be held at yards throughout the Norfolk Southern system. Additionally, Norfolk Southern is staging resources including ballast trains, equipment, and generators, and will be prepared to commence storm recovery efforts once it is safe.”