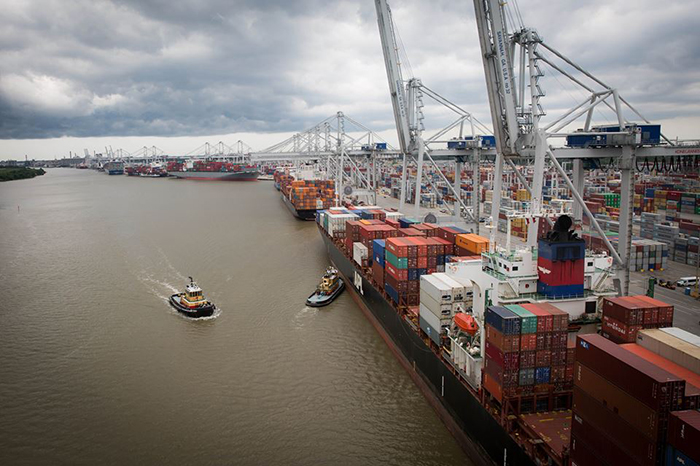 State port authorities in Georgia and Virginia want US federal maritime regulators to allow them to work together to better handle mega-ships, new alliances, and the goods of shared beneficial cargo owners customers, giving both ports an edge in retaining and attracting ocean services.

Under the proposal, which requires the US Federal Maritime Commission’s approval, the ports of Virginia and Savannah could jointly acquire operating systems and equipment; meet to share information on cargo handling, gate operations, turn times, staffing, and infrastructure; jointly draft agreements with carriers, shippers, and other terminal operators; and sync marketing materials to attract joint services, alliances, and carrier network agreements.

What it won’t do is allow the port authorities to jointly negotiate, set, and approve terminal rates or charges.

“It’s dialogue and collaboration,” Griff Lynch, executive director of the Georgia Ports Authority, told JOC.com. “This is not, this is absolutely not about pricing. We don’t even have it in the application.”

“We know there is a tide change happening,” said John Reinhart, Virginia’s CEO and executive director. “What we want to be able to do is find the way to be the most efficient terminals we can. We want to compete.”

“April is going to be a watershed moment for the carriers as far as realignment. They need to work out berthing arrangements,” said Lynch.

The Ocean, 2M + Hyundai Merchant Marine, and THE alliances will begin operation April 1. Under those new arrangements, there will be fewer choices of routes for BCOs, and there will be no guarantee that the shipments they book with certain carriers will travel on those vessels because of the numerous slot-sharing arrangements that will be in place. While some ports could see their cargo volumes increase, others less favorably situated could experience a loss of market share as the alliances rationalize port calls.

The new mega-ships with capacity for as many as 14,000 twenty-foot-equivalent units on board that are now able to access the East Coast market via an expanded Panama Canal add another dimension. As carriers limit their number of port calls, that means fewer ports could see larger discharges of cargo.

Georgia and Virginia are the busiest operating ports on the US East Coast, according to data from PIERS, a sister product of JOC.com. But individually, the ports handled just 13 percent and 11.6 percent of the coast’s total throughput in 2016: the Port of Virginia handled a total of 1,324,470 TEUs and the port of Savannah handled 1,490,103 TEUs. Together, though, the two ports handled almost 25 percent of that traffic.

By comparison the Port of New York and New Jersey, the largest marine gateway on the East Coast and a landlord port, handled 3,493,739 TEUs total in 2016, comprising nearly 35 percent of the coast’s total container traffic.

Savannah and Virginia could fare better together competing against other US ports for major carrier services than alone, according to Lynch and Reinhart.

“There’s a lot of dialogue that goes into that planning process. If you could have two of the three major US ports on the East Coast to go into that conversation and talk, not about pricing, but operations, there’s a lot there,” Lynch said.

Although there are only two parties to the Georgia-Virginia agreement now, Lynch and Reinhart said they were amenable to expanding the agreement’s port coverage later. That could one day include New York and New Jersey, as well as the South Carolina Ports Authority, which is another operating port and situated geographically between Virginia and Georgia.

For now, though, the port chiefs said they believe their respective ports are the best match for each other.

“Look at the Port of Virginia and the Georgia Ports Authority. We’re both terminal operating ports, we both have common practices across our facilities, we both do significant amount of volumes, and we have the same strings and networks,” said Reinhart. “To go to multiple ports didn’t make a lot of sense with us.”

“We discussed it, we considered it, and the fact is maybe down the road we do that, if it makes sense. What we thought about was, ‘Hey, let’s get this started. The more parties that are in here, the more difficult or complex it becomes,’” Lynch said.

Lynch and Reinhart are confident the agreement will pass muster with federal regulators concerned with market competition. Each said their port doesn’t compete directly for the same cargo or customers.

“When you look at the market base this is not two ports in the same market trying to control the markets,” Lynch said. “When I look at overlap, our major market for Savannah is the Southeast. I think that John’s major market is obviously the mid-Atlantic and Midwest rail service up to Chicago. That’s not something we’re really plugged into right now.”

Lynch added, however, “things may change.”

Savannah is pursuing its Mid-American Arc initiative that will extend the port’s intermodal reach into the Midwest, expand on-dock rail operations, and more than double the busiest Southeast container gateway’s rail lift capacity. Virginia has signed a new long-term lease at its Virginia International Gateway terminal, clearing the way for the port to begin work doubling capacity at the terminal serviced by both Eastern railroads, which should give a boost to the port’s ongoing push inland via intermodal rail.

If and when things change, as Lynch suggested, Reinhart maintained that cargo moving through their ports to inland Midwest markets is discretionary. “The overlap is those inland markets, and they aren’t captive markets,” said Reinhart.

That’s a different tone than the one set by previous terminal operator alliances in Hong Kong and Miami, among other locales. Those agreements appear to be geared toward widening profit margins for terminal operators at a time when margins in the containerized ocean shipping industry are razor thin.

In Miami the alliance between the South Florida Container Terminal and the Port of Miami Terminal Operating Company includes language that would allow the terminal operators to discuss and agree on matters of rates, charges, rules, and regulations through joint or individual marine terminal operator agreements with ocean common carriers.

Lynch and Reinhart said they sought to set a different tone. It is one of the reasons South Carolina was not invited to join the alliance. The Port of Charleston is simply too close geographically to Savannah, just more than 100 miles away.

“I think it does make it a little more challenging when you have two ports that are so close,” said Lynch. “We’re servicing different markets.”

Lynch and Reinhart said the Georgia-Virginia agreement would instead enable the sharing of standardized data and best practices that could give a boost to operations.

Virginia and Georgia have been working to diligently collect information on turn times and wait times for port users. “Are there evolving ways we can reduce their time on the terminals?” Reinhart asked. He believes the ports’ discussion agreement is the answer to that question.

“Years back, there was congestion all over the East and West coasts and the FMC had listening sessions and they said terminals should get together to share best ideas, best practices,” said Reinhart. “Obviously we need a structure to have that. This is the structure.”

The port authorities filed their proposed agreement with the FMC Friday. Assuming the commission takes no action that would interrupt the regulatory 45-day clock, the agreement is scheduled to become effective on April 10.