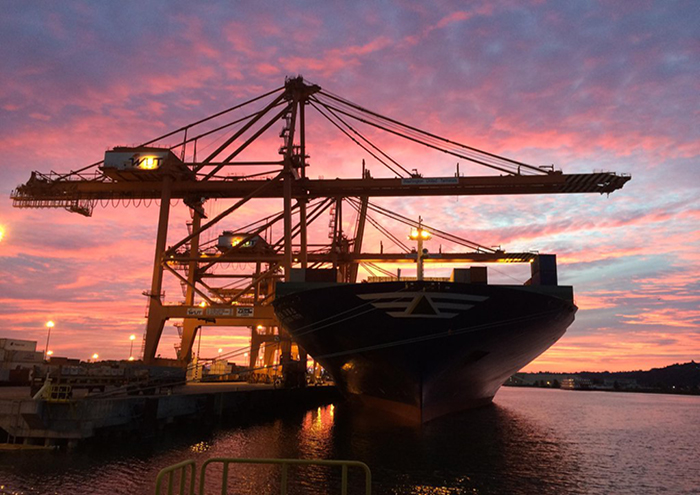 TACOMA — On-dock rail is a requirement for West Coast ports, which ship about two-thirds of their containerized imports inland via intermodal, but the Port of Tacoma really sees efficient rail operations as a strategic advantage in its competition for market share with Canada and California ports.

Already facing an intermodal rail cost disadvantage of about $400 to the important Chicago hub compared to the Vancouver and Prince Rupert gateways to the north, Tacoma takes time and cost out of its supply chain by streamlining the hand-off of containers from vessels to trains.

Michael Reilly, director of business development for Tacoma and now the combined Tacoma-Seattle Northwest Seaport Alliance, said the Pacific Northwest gateway is always asking, “How do we mitigate the $400 difference?”

Time is money in international transportation, and retailers are forever looking for ways to speed merchandise to market in order to reduce inventory carrying costs. Tacoma takes this challenge seriously, and Reilly emphasizes that point by noting that intermodal containers begin their eastbound trip from the port while the vessel is still at berth.

Using an every-week example, Reilly said a vessel that arrives in port at 6 p.m. will have its first intermodal unit train leave Tacoma the next morning. The second train leaves at 5 p.m., and a third train is on its way the second morning before the vessel leaves port.

The Canadian National and Canadian Pacific railroads price their intermodal services to the U.S. Midwest aggressively. Railroads consider pricing to be proprietary, but industry sources say the Canada railroads undercut the BNSF and Union Pacific railroads to Chicago by about $400 per container. A study by Ocean Shipping Consultants for Port Metro Vancouver said the differential could be as much as $600 per container, although that number could be based on data collected before the railroads changed their pricing structure last year.

Tacoma has 75 miles of track in the harbor, and is spending $20 million on projects to remove bottlenecks and increase train velocity. For example, the port and its rail partners replaced 35 manual switches with electronic switching capability from the trains. Crew members no longer have to get off the train to manually throw switches, and this cuts about 20 to 25 minutes from each train trip and mitigates trains backing up and blocking the main line into the harbor, Reilly said.

Tacoma differentiates its rail operations as on-dock, such as the North Intermodal Yard at Terminal 7, and the near-dock South Intermodal Yard, but the south yard is only one-eighth of a mile from Terminal 7 and the APM terminal.

In addition to intermodal, Tacoma’s rail operations also serve auto, bulk and breakbulk facilities at the port. Reilly said the port’s operations center coordinates train movements to minimize interference of these diverse train movements through out the harbor area.

Vessel stowage and unloading are coordinated with intermodal trains to expedite the vessel-to-rail handoff. Using the G6 Alliance as an example, Reilly said the containers of the six lines in the alliance are block-stowed on each vessel so, for example, a Chicago block is discharged and moved immediately to the waiting intermodal train for the eastbound move. “They build a stow in Asia and it is peeled off at the terminal here,” he said.

Tacoma has 21 transloading facilities in the harbor area where merchandise is removed from 40-foot marine containers and transferred to 53-foot domestic containers. Most ports do not have enough acreage to support near-dock transloading containers, so once again Tacoma is able to increase the velocity of intermodal cargo. About 30 percent of the imports are transloaded into domestic containers, with the rest moving intact to interior destinations.

Although space is becoming more of a premium, the port continues to identify parcels that can be repurposed for the handling of other cargoes or even to store empty containers, as was the case with a 20-acre site where truckers can drop off empty containers rather than hauling them into a marine terminal. “It’s another example of repurposing for efficiency,” Reilly said.