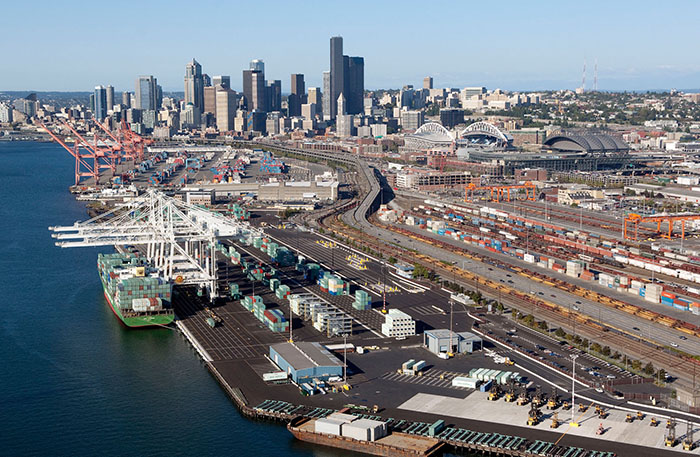 Recognizing the threat posed by Canadian competitors, the ports of Seattle and Tacoma last year joined together to form the Northwest Seaport Alliance to better use their resources.

The ports of Seattle and Tacoma will lose more ground to competing US and Canadian ports unless the state government works closer with the transportation industry to establish dedicated funding for port-related infrastructure and speeds up project permitting, according to a white paper released Thursday.

The report commissioned by the Washington Maritime Federation noted that shippers of discretionary cargo have more routing options than ever before with the recently completed Panama Canal expansion project and growing competition from the Canadian ports of Vancouver and Prince Rupert. Furthermore, the concentration of ocean carrier assets in vessel-sharing alliances is resulting in larger vessels calling at fewer ports, which also threatens the growth of the Puget Sound ports.

Growth in Seattle and Tacoma depends upon expanded port capacity to handle bigger vessels, and improved transportation infrastructure to the eastern half of the United States, where two-thirds of the ports’ cargo originates or is destined for. Port and transportation infrastructure development can be assisted, or hindered, by planning and funding policies at the state level. “Public policy decisions matter,” said David Matsuda, co-author of the report and former US Maritime Administrator under President Obama.

Seattle and Tacoma, which since last year have operated under the Northwest Seaport Alliance, rank fourth in the United States as a port complex. Steve Rothberg, partner at Mercator International and co-author of the white paper, said the two ports gained a clear advantage by combining planning, development, and marketing efforts. “The Northwest Seaport Alliance is working,” Rothberg said.

However, while the Puget Sound ports were improving the attractiveness of their gateway, East Coast ports were preparing for the economies of scale offered by the larger ships that call there now since the Panama Canal expansion project was completed in late June. Also, Vancouver and Prince Rupert, which work closely with federal, provincial and local governments under Canada’s Asia-Pacific Gateway and Corridor initiative, have captured a growing share of US Midwest cargo from Seattle and Tacoma.

In the first seven months of 2016, Seattle-Tacoma gained some ground in its fight for laden import and export market share in the Pacific Northwest, according to statistics from the ports of Vancouver and Prince Rupert, and PIERS, a sister product of JOC.com within IHS Markit. The alliance ports had a market share of 41.8 percent in that period, compared with a share of 39 percent for the first seven months of 2015. Vancouver lost 3 percentage points and fell to a 46.8 percent share. Prince Rupert’s share has been essentially flat year-over-year, inching up 0.21 percentage points year-over-year.

To combat this problem, the white paper suggests that Washington establish an office or committee to investigate and recommend permitting improvements. The report also suggests that state regulators streamline permitting timelines through a “shot clock” approach pioneered by Canada, with firm deadlines for approving port and infrastructure projects. Implementing a web-based dashboard that provides updates on the status of projects in order to “get a handle on run-away project permitting timelines” would also help, the report stated.

It is important that Washington engages in statewide land-use planning to identify and preserve port-usable properties, the report said. This suggestion was aimed directly at Seattle, where developers want to build a sports arena on land adjacent to the port.

A greater emphasis on port-related development could move forward if state agencies created specific roles for individuals with port and transportation expertise. This is important for many US ports because, unlike Canada, the US lacks a national freight policy with input from designated maritime industry representatives, the report noted.

Washington, like many states, lacks a dedicated source of funding for port and inland transportation infrastructure development. The report recommends that a dedicated source of funding be established, but it does not advise what the funding source should be. It does, however, note that revenues from the state gasoline tax must, by law, be spent on highway and roadway projects, so the report suggests expanding eligibility for existing state-level funding sources.

Seattle and Tacoma, along with Washington’s two US senators, have taken the lead in calling for changes to the federal harbor maintenance tax, which is designed to support dredging, but the Puget Sound ports, with their naturally deep harbors that require only minimal dredging, receive back from the fund only a fraction of the revenue they generate. One of the suggestions at the national level is to provide more flexibility as to how HMT revenues can be spent on port and infrastructure development.

The Northwest Seaport Alliance offers compelling advantages that include deep water able to accommodate the largest container ships afloat, excellent intermodal rail service through the upper Midwest to Chicago and beyond, efficient intermodal handoffs from marine terminals and faster time-to-market given the shorter distances from China and North Asia.

In order to capitalize on these advantages, Washington’s ports and maritime transportation leaders must work more closely with the state legislature, transportation, and regulatory agencies to bring maritime industry expertise to decision-making at the state level, the white paper said.

The loss of Hanjin won't help

Permalink Submitted by ferrullig@minds... on Oct 10, 2016 10:57AM EDT
The loss of Hanjin won't help, they were pretty entrenched up there, the last to leave Portland which helped Seattle/Tacoma. There are some TPEB rates into the mid-west that are favorable vs PSW ports to help. But because of the relative lack of size of the local markets and the outbound imbalances, they are at a disadvantage.
Port News›US Ports›Port of Tacoma
Port News›International Ports›Port of Prince Rupert
Port News›International Ports›Port of Vancouver
Port News›US Ports›Port of Seattle
Regulation & Policy›Trade Data›United States Trade Data
North America›Canada
North America›United States