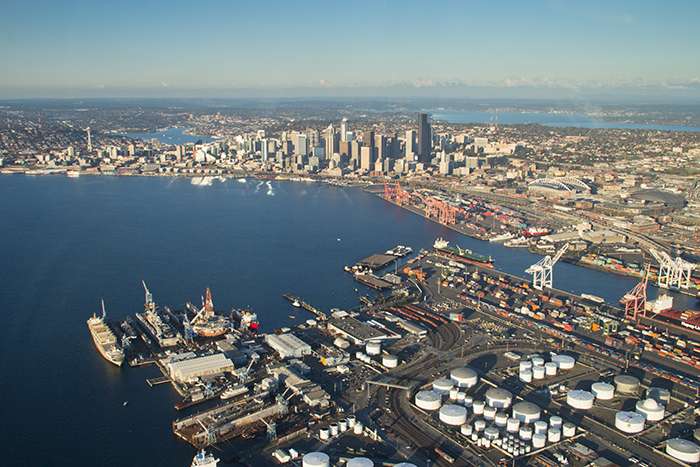 A $300 million investment will allow the Port of Seattle

The Northwest Seaport Alliance (NWSA) on Tuesday approved a lease arrangement with SSA Terminals to modernize and operate the vacant Terminal 5, a move that will consolidate international container volume in the West Waterway area of Seattle and improve cargo-handling efficiency.

The lease arrangement will set in motion $300 million in infrastructure improvements designed to accommodate mega-ships with a capacity of 14,000 TEU and enhance intermodal rail service to Chicago and the Midwest as the NWSA — the joint operating partnership between the ports of Seattle and Tacoma (Sea-Tac) — seeks to secure its market share in the region.

With nine container terminals spread out over the North Harbor (Seattle) and the South Harbor (Tacoma), the NWSA master plan seeks to consolidate international traffic at two large terminals in each port with deep water and rail access, NWSA CEO John Wolfe told JOC.com in 2017. The BNSF and Union Pacific railroads are running larger unit trains from Seattle and Tacoma to the Midwest, which means the terminals must be able to efficiently transfer containers from vessels to rail.

Intermodal rail service to the eastern half of North America is key to the success of not only the NWSA, but the competing Pacific Northwest ports of Vancouver and Prince Rupert as well. In Seattle-Tacoma, terminal operators aim to have the first intermodal train depart before a vessel is even finished unloading, Mike Reilly, director of business development, intermodal services at the NWSA, told JOC.com in a 2015 interview. Vancouver struggled with rail container dwell times in excess of five days in the winters of 2018 and 2019, according to dwell times published on the Vancouver website.

After years of preparation, the NWSA master plan is beginning to take shape in the North Harbor. The managing members of the bi-port alliance on Tuesday approved a lease for Terminal 5 with SSA Terminals (Seattle Terminals), a joint entity owned by SSA Marine, which operates container terminals in Seattle, Oakland, and Long Beach, and Terminal Investment Limited, Mediterranean Shipping Company’s terminal operator affiliate. Terminal 5, formerly the home of APL, was vacated five years ago to make way for the redevelopment project. “The modernization of Terminal 5 represents a transformative investment in our region to support our state’s economy,” said Stephanie Bowman, co-chair of the NWSA.

The project will set in motion a series of intra-harbor moves for container vessel calls as Seattle consolidates container operations at Terminal 5 and Terminal 18 in the West Waterway, also operated by SSA Marine. Terminals 30 and 46, located adjacent to the city’s busy downtown, will handle mostly cruise ships and breakbulk and project cargoes. The first phase of construction at Terminal 5 is scheduled for completion in 2021, according to the NWSA.

The Seattle-Tacoma gateway in 2018 handled 3.1 million TEU of laden and empty containers, an increase of 3.9 percent over 2017, with laden imports increasing 6.1 percent and laden exports up 1.6 percent. The growth has continued in the first two months of 2019, with total volume up 10.9 percent, as imports rose 10.1 percent and exports jumped 13.4 percent in January-February, according to port statistics.

However, the US Pacific Northwest is engaged in a fierce battle with the Canadian ports of Vancouver and Prince Rupert, which also serve the US Midwest via intermodal rail, for regional market share. The Canadian ports in 2018 increased their regional share of Asian imports to the US market to 63 percent from 58.2 percent in 2014, according to PIERS, a sister product of JOC.com within IHS Markit. The Terminal 5 modernization will also allow the NWSA to handle 14,000-TEU vessels now being deployed on the trans-Pacific trade, nearly triple the average vessel size of about 4,800 TEU in 1997.

A 2018 NWSA study comparing the cost of moving a container from Asia to Chicago through Seattle-Tacoma with that of Vancouver found the Canadian port had a $400-600 price advantage, thanks in large part to less costly intermodal rail service via the Canadian National and Canadian Pacific railroads.