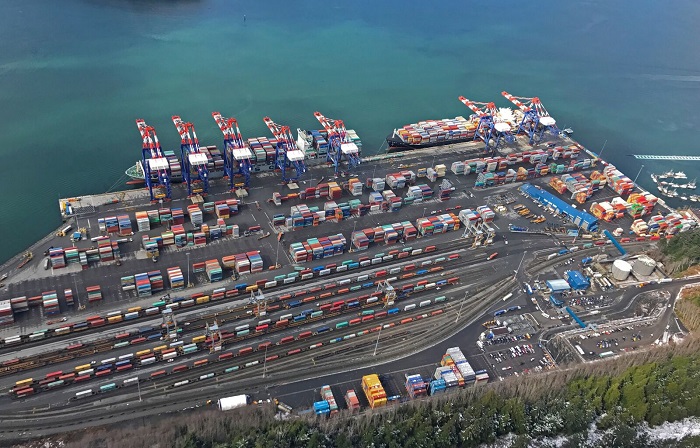 The Northwest Seaport Alliance is in a heated battle with Vancouver and Prince Rupert for discretionary cargo moving to the Midwest, and the Canadian ports are winning thanks to intermodal rail rates that are $400 to $600 per container cheaper. The CEO of the ports of Seattle and Tacoma is convinced the loss of market share is due to cheaper Canadian rail rates, while a Prince Rupert manager says it is simply not the case.

“Our port charge per container is less than $100,” said John Wolfe, CEO of the Northwest Seaport Alliance. “We could offer our facilities free of charge and still not come close to that number,” he said.

Prince Rupert, one of the fastest-growing ports in North America, says the discussion begins and ends with marine terminal and rail efficiency. “It’s not a cost story. Cost doesn’t even come up in discussions with customers,” said Brian Friesen, director of trade development and communications. “It’s all about service. Our value proposition is speed and reliability of service,” he said.

Since two-thirds of North America’s population lives in the east, West Coast ports rely upon speedy, reliable, and cost-effective intermodal rail service to attract time-sensitive, high-value imports from Asia. The Union Pacific and BNSF railroads connect West Coast ports with Chicago and other major hubs in the Midwest, with interline services to the East Coast. The Canadian National line runs from Prince Rupert to Chicago, Memphis, and New Orleans. CN and Canadian Pacific connect Vancouver with Chicago and destinations to the east.

A 2015 study by Ocean Shipping Consultants for the port of Vancouver found that importers in Chicago could save $600 per container by shipping through the Canadian port versus the US West Coast, due primarily to the lower intermodal rates charged by CN and CP. A 2018 Northwest Seaport Alliance analysis comparing Tacoma, Los Angeles-Long Beach, Prince Rupert, and Vancouver shows that shipping through the Canadian ports to Chicago is cheaper than through the US ports in both terminal charges and intermodal rail costs, with a combined cost differential of almost $400 per container.

Canadian all-in costs are lower, too

The Canadian ports also enjoy an advantage based upon a formalized strategy of the federal and provincial governments to work closely with the ports, railroads, and trucking companies to develop and implement a national freight plan. The government bodies in Canada back this commitment with money. The United States does not have a national freight program, and state efforts in the United States vary from region to region. “Canada has done a great job in that area,” Wolfe said.

The Northwest Seaport Alliance is addressing that issue on two levels. Port managers recently described the challenging competitive environment to state of Washington representatives, and they understand completely, Wolfe said. The Northwest Seaport Alliance is also coordinating its efforts with other US ports to lobby for a national freight program, backed by federal money. Wolfe said the results of both efforts are still to be determined.

While all-in transportation costs to the Midwest are critical to market share, the Canadian and US ports are concentrating their efforts on infrastructure development and process improvements that drive efficiency. Capacity is not an issue for Seattle-Tacoma. The gateway has excess terminal capacity, which will increase further as the port next spring expects to break ground on redevelopment of Terminal 5. The vacant property offers the opportunity to build a modern terminal on a greenfield site. “Overall, our infrastructure developments are on track,” Wolfe said. Total laden container volume in Seattle-Tacoma in 2017 was 2,265,449 TEU, down 3.6 percent from 2016, according to PIERS, a JOC.com sister product.

Prince Rupert, which handled 689,923 laden TEU in 2017, a 14.3 percent increase over 2016, added a second berth and 6,000 feet of rail track last year at its Fairview container terminal. The port can work two ships simultaneously, when necessary. Prince Rupert has three intermodal train departures each day, and can now handle a fourth train if needed. “We have berth resiliency and surge capacity,” Friesen said. Prince Rupert has an annual capacity throughput of 1.35 million TEU and plans to increase that capacity to 1.6 million TEU in 2020 and 1.8 million TEU by 2022, Friesen said.

Vancouver, which is the most space-constrained of the three Pacific Northwest gateways, will add 1.2 million-TEU capacity over the next few years with expansion projects at the Deltaport and Centerm terminals. Vancouver’s future rests upon its ability to build the Roberts Bank Terminal 2 project that will add 2.4 million-TEU capacity. “Without Terminal 2, Canada will run out of capacity on the West Coast. There is nothing else anywhere in the planning and permitting process that could deliver capacity for demand by the mid-2020s,” Robin Silvester, CEO and president, told the trade press recently. Vancouver in 2017 2,779,445 TEU, up 6.6 percent from 2016, according to PIERS.

The Canadian and US ports are competing to be the most efficient gateways in the Pacific Northwest, and that means implementing process improvements such as extended gate hours, container dray-offs to mitigate terminal congestion, and the use of technology to provide beneficial cargo owners (BCOs), truckers, equipment providers, and other port users with greater shipment visibility from origin to destination.

Prince Rupert has a logistical advantage because it is almost entirely a rail-served port and therefore avoids truck-related gate congestion. On-terminal container dwell times at ports are normally less from rail operations than for intermodal rail cargo. Therefore, BCOs who ship through Prince Rupert were surprised last winter when average container dwell times jumped from the normal 2.5 days to more than twice that due to rail service issues and severe weather, especially in British Columbia. Dwell times the past three months have been back in the 2.5-day range, Friesen said.

Vancouver last winter experienced a similar deterioration in rail service and weather-related problems. Therefore, BCOs raised concerns in early July when container dwell times increased from zero to three days to three to seven days at some of the terminals. A port spokesperson said the port considers the increased dwell times to be an “anomaly” due to especially strong container volumes in June and July. Both the CP and CN have been investing since last winter in increased power, rail car, and crew assets, and the port and its transportation providers should be positioned to handle the expected growth in container volume this year of about 4 percent, the spokesperson said.

The Northwest Seaport Alliance is in discussions with terminal operators right now about resurrecting the peak season extended-gates program the gateway has run the past few years. Also, Seattle and Tacoma are experimenting with process improvements such as establishing peel-off piles for rapid removal of inbound containers as they are discharged from the vessels.

Transloading of marine containers into domestic containers and trailers has increased in recent years, which is helping to reduce the cost of transport to the eastern half of the country, Wolfe said. The gateway has industrial properties in proximity to the ports that transloaders are interested in, Wolfe said. “This gets the drayage costs way down,” he said.