Largest Seattle terminal will not generate VGM data for shippers

Largest Seattle terminal will not generate VGM data for shippers 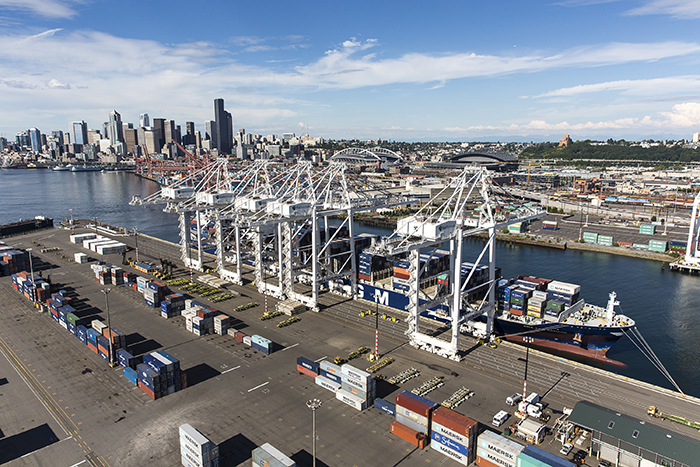 The SSA Marine terminal at the Port of Seattle.

SSA Marine will continue to weigh all export containers at its Seattle terminal for safety requirements, but the Northwest Seaport Alliance’s largest terminal operator won’t provide the weight readings it captures to meet existing federal rules to exporters so they can meet the SOLAS rule taking effect July 1.

Some U.S. and international terminals in recent months announced they will weigh containers for exporters who are unable or unwilling to weigh them at their own facilities in order to generate the verified gross mass document. Some U.S. East Coast operating ports, such as Charleston and Savannah, are offering the service for free, although terminals in Baltimore and New Jersey will charge for it.

Stakeholders have urged the Federal Maritime Commission to come to a decision on whether or not to allow a discussion group that would look into the feasibility of using weight information generated to comply with existing workplace safety rules of the Occupational Safety and Health Administration to meet the VGM requirements. The Coast Guard has signaled that such an approach is acceptable in its eyes.

SSA, at its terminals on the West Coast, does not plan on weighing any containers separately, said Ed DeNike, SSA's chief operating officer. In order to do so, dockworkers would have to remove the containers from chassis, place them on the scale and then place them on a yard tractor for transport to the container stacks or vessels, he said.

The International Maritime Organization’s Safety of Life at Sea requirement that shippers weigh a container and present to the ocean carrier the VGM of the container before it is loaded onto a vessel has generated a flurry of different approaches by ports and terminals across the U.S., and indeed at ports around the world.

U.S. terminal operators for years have weighed export containers, and the terminals and shipping lines use the information in planning vessel stowage. They stow containers based on the varying weights of the boxes to ensure proper vessel balance during voyages. Terminals use large scales to weigh the truck, chassis and export container as a unit. The container weight for stowage purposes is achieved by subtracting the weight of the truck and chassis.

Most West Coast terminals have such high import and export volumes that pulling certain containers aside to weigh them separately would add to port congestion. DeNike noted recently, for example, that SSA’s Oakland International Container Terminal generates 5,000 to 6,000 truck moves each day. Any revenue that is gained from weighing containers to generate VGMs for SOLAS requirements would be more than offset by the congestion that could result, he said.

DeNike noted that the filing of VGM documents remains a matter between the shipper and the ocean carrier. The associations representing terminal operators in Los Angeles-Long Beach and Oakland have issued press releases stating that each member terminal will decide if it wants to offer special weighing services for SOLAS, although no West Coast terminal has announced any intention to do so.

The Northwest Seaport Alliance of Seattle and Tacoma has had casual conversations with the terminal operators, and their comments have been similar to those of SSA, said alliance spokeswoman Tara Mattina. “We continue to advocate for the most flexible solution,” she said.