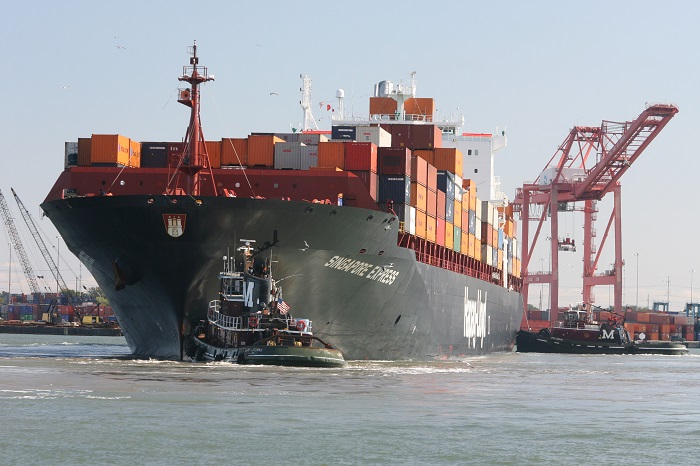 Nearly a year after the ports of Virginia and Georgia struck a groundbreaking agreement to collaborate on a host of operational and other issues, the ports are hoping it will help position them as two of the most prominent “gateway” ports on the coast, with rail as a key focus in the competitive East Coast market.

The agreement will help give the ports an edge on the East Coast, as ports along the coast face the logistical stress expected from the opening of the expanded Panama Canal and the steady escalation in size of mega vessels, Griffith Lynch, executive director of the Georgia Ports Authority, told this month’s 18th Annual TPM Conference.

Combined, Norfolk and Savannah handled 5.3 million loaded TEU in 2017, more than the 4.8 million loaded TEU handled by the Port of New York and New Jersey, the largest port on the coast, according to PIERS, a sister product of JOC.com. Norfolk and Virginia in 2017 had a combined market share of 32.8 percent of the total East Coast container trade, compared with a share of 29.2 percent at New York and New Jersey.

By pooling information on operating practices, comparing notes on new technology and perhaps in the future coordinating ship arrivals at the two ports, they can improve operational efficiency and command more attention from beneficial cargo owners (BCOs) than alone, the executive directors of the ports said.

Lynch cited the example of how the two executive directors spent a full day with their support teams comparing the design each has for expanding their rail operations, which are a key part of both of their future plans, Lynch said.

“We are not doing the same thing. But we learned from each other,” Lynch said. “That is a great example of what this whole thing is about.”

Virginia — which is served by CSX’s $850 million National Gateway project, the last piece of which was opened in September — handles 36 percent of the port cargo by rail and is looking to get to “40 percent and beyond,” said John F. Reinhart, CEO and executive director, Port of Virginia, who spoke on the panel. In Savannah, which is spending $128 million to upgrade its rail capacity to enable it to load 10,000-foot trains and double its lift capacity, rail accounts for 18 to 20 percent of the cargo volume, and the port is hoping to expand to 25 percent, Lynch said.

The Federal Maritime Commission in April unanimously voted not to block the East Coast Gateway Port Terminal Agreement between Virginia and Georgia, the first of its kind in the United States, that some analysts believe will set a precedent for port partnerships. The two ports had submitted the agreement two months earlier.

Under the agreement, the ports will be able to jointly acquire operating systems and equipment; meet to share information on cargo handling, gate operations, turn times, staffing, and infrastructure; jointly draft agreements with carriers, shippers, and other terminal operators; and sync marketing materials to attract joint services, alliances, and carrier network agreements. The two cannot jointly set rates or charges, however.

“This is not just a port agreement, this is a gateway port agreement,” Lynch told the conference. “So I think we both believe that as these vessels get larger and continue to move in that direction, not everybody is going to be a winner. It can’t be, because there are ports that just can’t handle the magnitude and the volume that these vessels bring.

“The gateway port agreement helps us ensure that for the future we will be able to handle this cargo,” Lynch said. “I think we will see in the future less ports benefitting from these larger ships. I believe that you have got three gateway ports on the East coast. And that is New York-New Jersey; that is not going to change. That’s Virginia. And that’s Georgia. So to the extent that we can collaborate, the better it will be for everybody involved.”

The agreement emerged as both ports are growing strongly. Norfolk’s share of the East Coast loaded import and export container market increased from 11.7 percent in 2010 to 13.3 percent in the third quarter of 2017, according to PIERS. Further, the port increased volume by 4.8 percent in the first nine months of 2017 — to 1.6 million TEU — over the same period in 2016, the PIERS survey shows.

The two ports have grown as the market share of the Port of New York and New Jersey, the largest on the East Coast and the third largest in the nation, has fallen from 33.5 percent in 2010, to 29.3 percent in 2017, the PIERS figures show. However, loaded cargo volume through the port jumped by 13 percent in January. The port is looking to boost the share of its cargo that is moved by rail from about 15 percent at present to 20 percent by 2020.

William F. Rooney, vice president, strategic development, for Kuehne + Nagel, said the agreement, and any resulting efficiencies, is “really, really relevant” to his customers, due to the potential for helping mitigate the growing pressure on shippers and their supply chains.

“If you look at what’s happening across our customer base, what I see is higher and higher velocities in the supply chain. Things are going faster and faster and faster,” he said. “At the same time that’s happening, you are having trade growing, which is putting more and more pressure on operations, ports,” as is the growing size of ships and the government rules requiring truck drivers to use electronic logging devices. Any effort to gain efficiencies under those circumstances will help, he said.

Lynch said that the two parties have spent the last year getting “to know each other.” Virginia, which had installed a Navis terminal operating system, was able to give insights to Georgia as it prepares to do so.

Likewise, the two executive directors spent a full day with their support teams comparing the design each has for expanding their rail operations, which are a key part of both of their future plans, Lynch said.

“We are not doing the same thing. But we learned from each other,” Lynch said. “That is a great example of what this whole thing is about.”

Virginia, where CSX just finished its $850 million National Gateway project, has 36 percent of its port’s cargo by rail, and is looking to “40 percent and beyond,” said John F. Reinhart, CEO and executive director, Port of Virginia, who spoke on the panel. In Savannah, which is spending $128 million to upgrade its rail capacity to enable it to load 10,000-foot trains and double its lift capacity, rail accounts for 18 to 20 percent of the cargo volume, and the port is hoping to increase that portion to 25 percent, Lynch said.

“One of the things we looked at is we were both operating ports,” Reinhart said. “We said, ‘What are the areas where cooperation and collaboration would add value?’ Some of these came real quickly. Customer service. If we can come up with better customer service and customer service that meets the requirements of the BCOs, we will be more competitive.

“We are really trying to focus on what are the things we can do to make our ports more efficient so that we attract cargo to the East Coast,” he said. “We are part of a network and, as large ships come, we know that the majority of our ships either come from New York to Virginia, or from Savannah to Virginia. So how can we hand off operations and share best practices on those ships, so that we can improve productivity on the berth, improve productivity at the gate and also for our designs of operating systems.”

How far that cooperation extends remains to be seen, but one frontier not yet passed is coordination in berthing windows.

“That was something that drove this discussion and decision to do this [agreement],” Lynch said. “We are not there yet, though. I see a time at the end of the day [when] what happens at any container terminal is all the ships want to come at same time. The berths are 40 to 50 percent utilized, but they are congested in many cases.”

That kind of situation could be alleviated through computerized coordination, which he described as “the uberization of berthing,” he said.

“I’m making that up as I go along. That’s not something we discussed,” Lynch said. “But there are often times when there might be vessels backed [up] at Virginia or Georgia and meanwhile, the other port has gotten an open berth. And we are not so far away that stowage is a challenge. But there are maybe things that can be looked at cooperatively with our customers and the ocean carriers and say ‘Look, you are all wanting a limited asset and you are all wanting it at the same time. If we can work together we might be able to better utilize that asset.’”