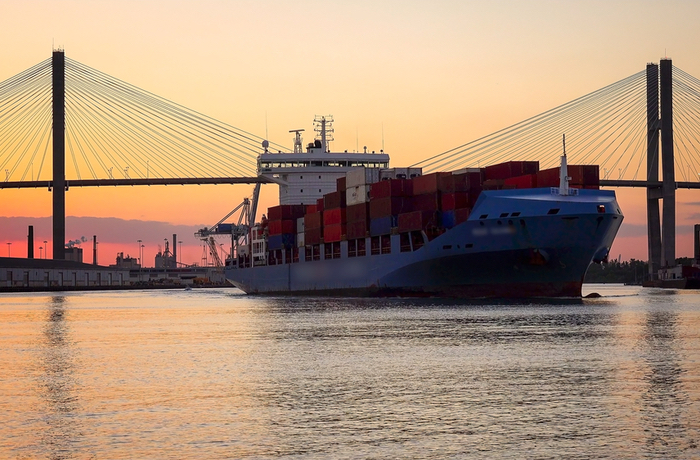 The height of the Talmadge Memorial Bridge caps the size of ships able to traverse the Savannah River at 16,000 TEU. Photo credit: Shutterstock.com.

In the State of the Port address, GPA executive director Griff Lynch also said work has begun to look at alternatives to the Talmadge Memorial Bridge so the port can one day handle 22,000-TEU ships. The height of the bridge caps the size of ships able to traverse the Savannah River at 16,000 TEU. The GPA has yet to detail what those alternatives could be, but possibilities include a new bridge.

The ability to handle ships as large as 22,000 TEU would help the port attract more services through the Suez Canal, as the largest vessels able to traverse the Panama Canal max out at about 14,000 TEU. Comparatively, ships as large as 23,000 TEU have traversed the Suez Canal. The manufacturing shift from China to Southeast Asia, a development occuring long before United States tariffs on Chinese goods, is driving volume on Suez services.

More immediately, Lynch said the two Class I railroads serving the port — CSX Transportation and Norfolk Southern Railway — will soon be able to get containers to Chicago in 67 hours, a 29-hour shorter transit than is currently available. That will be possible in six months with the completion of the first phase of a $218 million project to double the port’s intermodal capacity. It will also allow the railroads to build larger unit trains on site for a straight shot to Chicago, instead of stopping on ramps along the way to build density.

The three announcements show how the fast-growing port, which has seen container cargo volume jump 25 percent in the last three fiscal years, is inching closer to its goal of having 11 million TEU in annual capacity by 2035. Container volume in the port’s most recent fiscal year, which ended June 30, rose 7.3 percent to 4.5 million TEU, according to GPA data.

For the new terminal, GPA has acquired 300 acres on Hutchinson Island, which is down river from the Garden City Terminal, the largest container terminal in North America. Although it still requires authorization from the US Army Corps of Engineers, the terminal would add 2.5 million TEU in annual capacity and have a berth able to handle three 14,000-TEU ships simultaneously. With the Hutchinson Island facility planned, Lynch said he envisions the Jasper Ocean Container Terminal, a second proposed facility on the Georgia-South Carolina border, would be completed by 2040.

Explaining that the bridge restrictions were an “obstacle” to further growth due to the limitations it put on ships sizes, Lynch said an alternative is needed within 10 years. The Georgia Department of Transportation has hired a third party to explore alternatives to the bridge.

At the same time, the final phase of the deepening of the Savannah River to 47 feet, a project that has been 23 years in the making, will begin later this month, Lynch said. The $1 billion project will allow the port to handle more heavily loaded 14,000-TEU ships, and with fewer tidal restrictions. The estimated completion date on the final phase of deepening is fall 2021.

The increased volume brought by larger ocean vessels is spurring CSX and Norfolk Southern to build longer trains at the port. Through the completion of the first phase of the so-called Mega Rail project in March, NS will be able to build 10,000-foot trains on site. Phase 2, due to be completed at the end of next year, will create an adjacent space for CSX to do the same.

Building unit trains at the Garden City Terminal allows the railroads to provide direct and faster service to key markets because the trains don’t have to stop at other ramps along the way to build density. Lynch said with the faster unit trains, US imports from Asia will reach Chicago faster than if they came through the Los Angeles-Long Beach port complex, despite the much longer sailing time from Asia to Savannah through the Panama Canal.

“It’s not just about mileage; it’s about the velocity of the container through the port,” Lynch said in his address.

In the last few years, the port has cut down the average time it takes to load a container from the terminal yard to the rail ramp from two to three days to under 24 hours, he said. Coupled with faster transits via unit trains, “there is no reason we can’t create a new market, and that’s Chicago,” which Lynch estimates handles approximately 5 million TEU annually.

The railyard expansion will double the number of rail lifts the port can handle annually to 1 million, equating to approximately 2 million TEU. The port lifted 507,000 containers in fiscal year 2019, up 16 percent from the prior year and the second consecutive fiscal year with more than 15 percent growth. Rail volume through Savannah grew 35 percent in the previous three years.

About 20 percent of containers moving via Savannah are loaded directly to and from trains, Lynch said, adding he doesn’t expect that share to rise beyond 25 percent. That doesn’t account for imported goods that are transloaded from marine containers to 53-foot domestic containers or trailers, and commodities railed via bulk train services and then stuffed into marine containers.