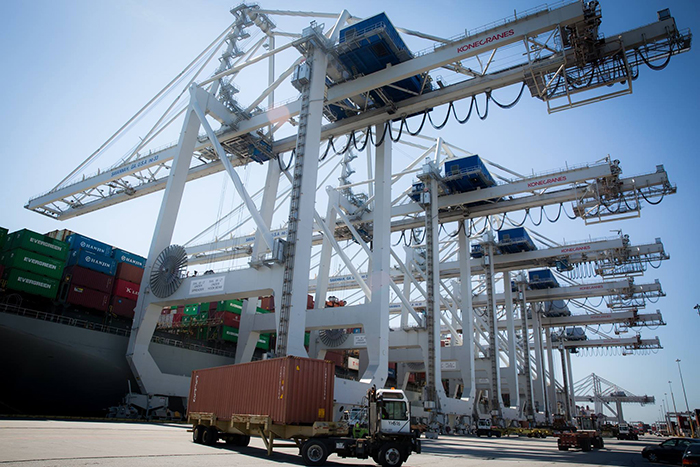 Ports throughout the Southeast, including Savannah, pictured, are scurrying to build up their infrastructure to make them more alluring for goods headed to the US Midwest.

The port of Savannah is steadily grabbing a larger share of containerized Asian imports, cementing Georgia as the gateway for nearly half of all imports from the likes of China and Vietnam through the fast-growing Southeast. But a string of recent successes by its Southeast competitors underscores that the battle for discretionary cargo is just heating up.

When competition spurs investment, shippers stand to benefit regardless of their port preference. A variety of factors — harbor depths, ocean services, on- and near-dock intermodal facilities, rail lift capacity, and inland reach — will determine where shippers will funnel Asia imports heading to Chicago and the Ohio Valley sweet spot farther east.

Ships up to 14,000 twenty-foot-equivalent units are heading to the East Coast after the expanded Panama Canal opened in June, providing further fuel to major shippers’ drive to diversify away from US West Coasts ports. A breakdown in labor negotiations that paralyzed ports from Long Beach to Seattle from late 2014 through early 2015 provided shippers another incentive to diversify their supply chains — if they could.

“With the Eastern ports we see more opportunity,” Gregory W. Ritter, chief customer officer at logistics giant XPO Logistics, told attendees at the 2016 JOC Inland Distribution Conference in Memphis this past November. At the top of Ritter’s list is Savannah.

In the past two years, Savannah’s share of Asian imports through the Southeast has risen by roughly 1 percentage point to 46.2 percent, whereas Charleston has seen a slightly less robust share gain, building from 13.5 percent to 14.3 percent, according to analysis of data from PIERS, a sister product of JOC.com within IHS Markit. The Port of Jacksonville was another port in the region to make noteworthy gains of Asian imports in the past two years, increasing its share from 6.21 percent to 6.42 percent.

The Asian import shares of the ports of Virginia and Miami have, meanwhile, kept relatively steady, at about 22 percent and more than 7.5 percent, respectively. Miami of late has been marketing its on-dock access to Florida East Coast Railway as a way to move Asia imports into the heart of the Southeast by trucking from Jacksonville or connecting to either Norfolk Southern Railway and CSX Transportation networks. Virginia has been positioning itself as a Midwest gateway for much longer and says it’s seeing better penetration into the Midwest, as a rise in the share of cargo moving via rail suggests.

Miami and Virginia already boast 50-foot harbors capable of receiving mega-ships. Although Virginia has always boasted a natural 50-foot harbor, Miami achieved its 50-foot depth in 2015 and New York-New Jersey did likewise this year. Meanwhile, harbor projects in Savannah, Charleston, and Jacksonville are all on schedule to be completed in the next four years.

The Savannah Harbor Expansion Project is already underway and expected to be completed by 2020. Savannah’s existing channel depth is 42 feet. When the deepening project is completed, the channel will have a depth of 47 feet at low water for the inner section of the 40-mile channel, and 49 feet for the 10-mile outer section, which extends into the Atlantic. With a seven-foot tidal fluctuation, Savannah’s channel would have maximum depth at high tide of 54 feet on the inner portion and 56 feet at the entrance.

Charleston is set to deepen its existing entrance channel from 47 feet to 54 feet and deepen the inner harbor from 45 feet to 52 feet, effectively making it the deepest harbor on the US East Coast when the project is completed in 2020. Federal funds for the Charleston project were authorized in the latest water infrastructure bill out of Washington this month.

Jacksonville’s harbor in the St. Johns River can already accommodate ultra-large post-Panamax vessels. Those vessels, though, cannot be fully loaded until the harbor is deepened from 40 feet to 47 feet. Roy Schleicher, chief commercial officer at the Jacksonville Port Authority, told JOC.com the port is making progress on the four-to-five-year project to deepen the St. Johns River, on pace with the harbor deepening project up in Savannah.

The project, however, has faced some challenges. The port’s TraPac terminal, which handles the majority of the port’s Asian import cargo, and the port authority are discussing the possibility of the terminal operator moving closer to the ocean in order to cut $150 million to $200 million off the $600 million harbor-deepening project. The port authority, though, doesn’t expect to be able to accommodate that move for at least another year, since it plans to extend the lease of SSA Marine at the potential site. Discussions between TraPac and the port authority are ongoing, but Schleicher said the port still plans to have shovels in the ground some time in the second quarter of 2017.

“You have big ships coming to the East Coast,” Georgia Ports Authority Executive Director Griffith V. Lynch said. “We stand to significantly increase our intermodal percentage. What we need is the footprint to handle that volume.”

The Georgia Ports Authority’s plan hinges on intermodal development that could see the state port grab a 50 percent share of the Asian import market by 2020. Part of that plan is Georgia’s Mid-American Arc initiative that will extend Savannah’s intermodal reach into the Midwest, expand on-dock rail operations, and more than double the busiest Southeast container gateway’s rail lift capacity.

In November, the Georgia Ports Authority’s board approved plans for the $140 million Savannah Multimodal Connector linking the Savannah Garden City Terminal’s NS and CSX operations. The on-dock facility, funded by a $44 million federal grant, will roughly double the terminal’s current rail lift capacity from 500,000 to 1 million. It will also enable the GPA to build 10,000-foot unit trains on site, without disrupting nearby traffic and reducing rail crossings.

Georgia already features 25 trains per week to and from destinations in its Mid-American Arc, with cargo moving from vessel to rail within 24 hours and guaranteed 24-hour service for priority boxes, besting competitors such as Virginia, which boasts a 36-hour dwell time. The unit-train capabilities, though, will deliver more reliable and consistent access to the heartland.

Like Georgia, South Carolina is also expanding intermodal options on its waterfront. By the end of this decade, Charleston plans to complete construction on its new Hugh K. Leatherman terminal. The $747 million facility will cover 280 acres, and increase the port’s total throughput capacity by 50 percent. Next door, the port is developing the Navy Base Intermodal Container Transfer Facility intended to support operations at Leatherman.

“While we have been very successful in developing intermodal container rail in Charleston, with close to 300,000 rail moves representing 25 percent of our volume and the successful development of an inland port network, the Navy Base Intermodal Facility is an important piece of infrastructure which will further enable the efficient growth of intermodal container rail through the Port of Charleston,” Jim Newsome, president and CEO of the South Carolina Ports Authority, told JOC.com.

CSX and NS will have access to the facility, but just how those railways access the facility has been a matter of some debate and has threatened the terminal’s construction timeline.

It’s the second time that the port authority has had to assure the industry that the Leather Terminal and its adjacent developments are on track. The port authority is now suing a pair of contractors over concerns that the terminals' wharf designs are not strong enough to support the equipment that eventually will be in place there.

Although Charleston and Savannah are still developing their new intermodal terminals, Jacksonville just recently completed its own. A new $30 million intermodal container transfer facility is now in operation adjacent to the port’s TraPac terminal earlier this month. Rail that connects to CSX’s main line at the new facility enables two unit trains to run from the facility each day to Chicago in two to three days. NS has a ramp a 20-minute truck dray away the TraPac terminal with comparable transit times to Chicago.

Jacksonville port officials admit they are playing catch-up to larger Southeast ports for valuable discretionary Asian business, having only entered the trans-Pacific trade in 2009. The port realizes it won’t be a mega-hub of the likes of Savannah, but it still sees potential to better serve its region and reach into the Midwest.

“Now, we are competing with ports like Savannah that had been there for a long, long time,” Jacksonville’s Schleicher said referring to the Georgia’s port long-standing Asia trade.