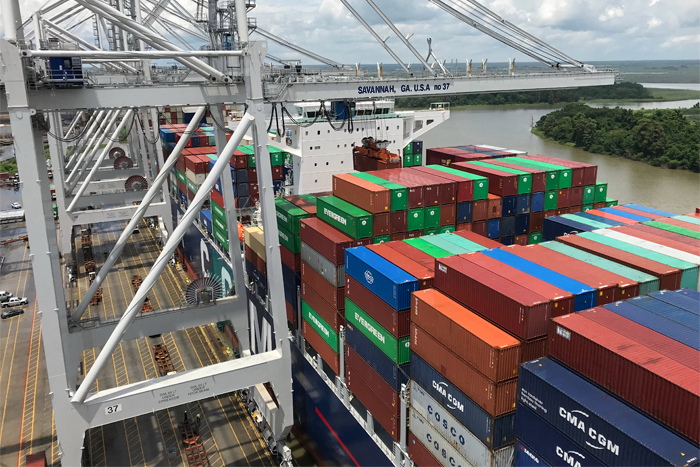 The Georgia Ports Authority (GPA) plans to nearly double in size to handle as many as 9 million TEU by 2030, a vision that requires more land, terminals, and repurposing existing facilities into container operations, according to the 2020 State of the Port address Tuesday.

The acquisition of 145 contiguous acres off the nearby Jimmy Deloach Parkway will provide an additional 1 million TEU of capacity. Building a new terminal on Hutchinson Island within the next five years and a partial conversion of the roll-on/roll-off (ro-ro) breakbulk Ocean Terminal to handle containers will also be critical steps to reaching the 2030 vision.

“Ten years out at a 4 percent growth rate, we’re going to handle 7 million TEU per year [empty and laden], so we’re going to need capacity of 9 million. If we don’t build, then they won’t come,” GPA CEO Griff Lynch said in his address. “As successful as we’ve been, we haven’t even begun to tap into the potential of what we could be.”

The GPA is doubling down on an investment for the future even though it’s already the largest port in the US Southeast and growing volume each year. The Port of Savannah handled nearly 3.7 million laden TEU last year, according to the port authority, up 4.6 percent from 2018. Only the Port of New York and New Jersey handles more containers annually on the US East Coast. Each port has  benefited from a coastal shift in Asian imports, which for the East Coast have increased to approximately 33 percent of cargo, from 26.5 percent in 2014.

Lynch is confident of continued strength in 2020. China has lifted a ban implemented in January 2015 on US poultry, which is a major export product in Georgia. The first batch of 50,000 pounds of chicken feet shipped last month.

Resin exports are expected to surge, with Plastic Express opening a 2.1 million-square-foot warehouse and A&R Logistics a 1.5 million-square-foot facility, each promising at least 25,000 export containers initially, and eventually more than 50,000. Those numbers would make the companies top-five Savannah exporters.

Resin industry analysts expect an additional 500,000 to 1 million new resin export containers in the next five years, which Lynch said will go to the ports ready for it.

Buying the new land on Jimmy Deloach Parkway, a limited-access truck freeway a block from the Garden City Terminal connecting to Interstate 95, is a major step in that direction. Lynch said it’s the largest addition of container terminal space in Savannah in more than 20 years.

“What we’re going to do is sell time. If it’s an export, import, or empty that needs to be a holding spot, we can put it here,” he said.

Lynch said in a conversation with Dr. Walter Kemmsies, a noted marine industry economist, he learned that not all shippers are looking for just in-time service; some would like to stock inventory. As ocean carriers and railroads pressure beneficial cargo owners (BCOs) to retrieve and return containers quickly through detention and demurrage penalties, Lynch said the new property will provide an option for those who need more time.

Few details were provided, but an additional 1 million TEU of storage capacity can ease the pressure on space in the Garden City Terminal. 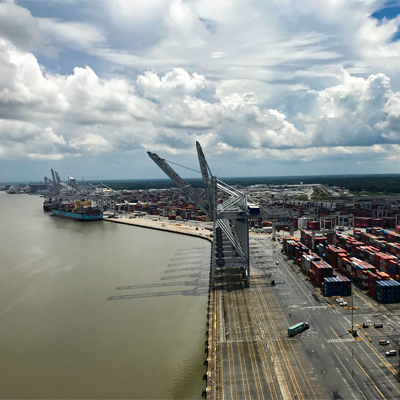 Plugging the holes in Garden City

“There were some delays because we had one or two berths down at a time. It had to happen because we had to prepare for the future, but we learned a lesson,” Lynch said in his address. “We’re going to do some work at Berth 1, but we will do it in a way that doesn’t impact our customers.”

Berth 1, the oldest in Garden City, will be the fourth capable of handling a post-Panamax vessel when completed in 2023 with up to six ship-to-shore cranes. 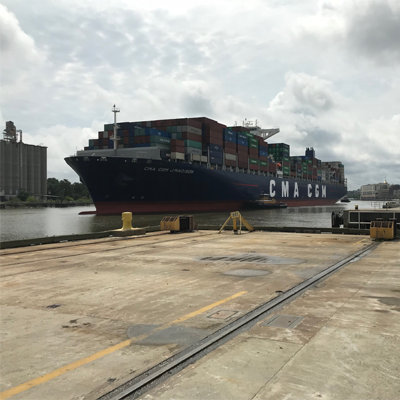 The Ocean Terminal, which is currently handling automotive and breakbulk cargo, will be reconfigured to handle smaller vessels while Berth 1 is rebuilt.

There will be a new truck gate built in the terminal linked to Interstate 16. A container storage yard of three to five acres will be created within two years with rubber-tire gantry cranes to handle both dry and temperature-controlled containers. Berth 18 of Ocean Terminal will be converted from handling steel to small vessels of up to 2,500 TEU.

Nine of the 36 weekly vessel calls are small ships, Lynch said, which usually go to Berth 1 in Garden City. After phase I of the Ocean Terminal conversion is completed at the end of 2020, vessels will be diverted to the new location. Phase II will be finished in 2021.

Automotive capacity will also grow with the renovations.

“The back of the facility will get nine acres of additional auto parking because autos are important to us,” Lynch said. “We don’t want to impact our carrier customers, or our autos, or breakbulk customers. Something has to give, and we are going to work through it, but we will not impact our core business there.”

He said, however, all this work is a stopgap measure for the container business until Hutchinson Island’s Savannah Container Terminal opens in 2025.

The new 200-acre terminal will be able to handle 2.5 million TEU annually when developed. A design contract was awarded to engineering firm Moffatt & Nichol and the permitting paperwork is being completed. When combined with the 1 million TEU from the land near Jimmy Deloach Parkway, it would bring the port close to the 9 million TEU capacity.

“The expansion at our deep-water ports in both Savannah and Brunswick is helping to fuel growth, and in turn investment, jobs, and increased competitiveness on the global stage,” said GPA Board chairman Will McKnight. “With the kind of investment and infrastructure development announced today, Georgia’s ports will undoubtedly stay ahead of the curve and the competition.”

The Savannah Harbor Expansion Project, which is deepening the harbor from 42 to 47 feet, is scheduled to be completed by the end of 2021. Even so, there will still be some tidal restrictions on larger containerships.

If a post-Panamax vessel can arrive without a tidal restriction, berth delay, or weather restrictions such as fog, then the GPA wants to push further inland with its Mega Rail Terminal doubling the rail lift capacity by 2021 and a transit time to Chicago of less than three days.

Technology is critical, however, to determine whether the supply chain is working as it should, Lynch said. If something goes wrong after the container leaves Georgia, BCOs may still blame the port.

So, GPA is tracking the position of the containers to know why the supply chain breaks down.

“We have a customer moving cargo through us to Chicago. It’s 1.23 days from the ship to train. Then it’s another 2.28 days to get to the [destination] location after it’s loaded on the rail. But the cargo got to the destination and sat for two days before it was picked up,” Lynch said. “We have to see why it is sitting for two days because I don’t want this customer coming back and say ‘Griff, we’re pulling back our business.’”

GPA wants to use business intelligence to give actionable information to BCOs.

“We can do this for any customer, anytime. We can look at it all, we can look at one box. We can search every container and get a summary,” Lynch said. “Our goal is 1,2,3. One day ship to rail. Two days on the rail to any destination, including Chicago. Then the third day it’s picked up.”

He said the technology will be available to ocean carriers, railroads, and BCOs now that it’s completed.