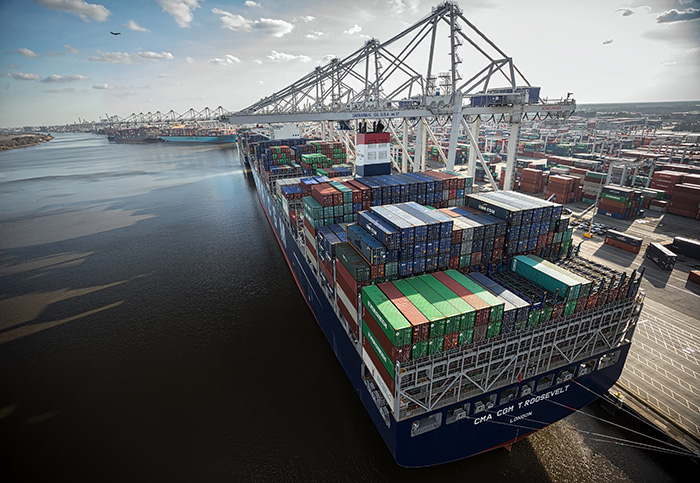 SEA ISLAND, Georgia — The Port of Savannah will expand the Garden City Terminal to allow the simultaneous handling of six 14,000-TEU ships by 2024, accelerating the third-busiest container gateway’s effort to become a much larger funneler of Asia imports into the US interior.

The announcement, made Tuesday at the Georgia Foreign Trade Conference, comes amid increased carrier interest in Savannah’s plan to expand its intermodal capacity to enable goods to reach inland destinations such as Memphis and Chicago at least two days faster than now. Through a $128 million project — with the first phase coming online in late 2019 and full completion set for 2020 — CSX Transportation and Norfolk Southern Railway will be able to fully build unit trains at the Garden City Terminal. That will reduce dwell time and create faster transits because trains will not need to stop at an inland yard to gain more railcars.

“We would like to see how far we can push the envelope west from the South Atlantic. Our desire is to take advantage of the rail connectivity to feed the Midwest and Ohio Valley,” George Goldman, the US president of Zim Integrated Shipping Services, said Monday at the conference in Sea Island, Georgia. Not having an Asia service connecting to Southern California is pushing Zim to maximize its inland reach from the US East Coast.

Double-digit container volume growth, providing the railroads the density they need to build unit trains, coupled with Savannah being the first inbound call on 10 trans-Pacific services are setting the stage for that play. Among the top five US container gateways, Savannah saw the highest growth in laden Asia imports in 2018, with imports jumping 10.9 percent, according to PIERS, a sister product of JOC.com within IHS Markit. Total US Asia container imports rose 7.5 percent in 2018 from 2017. The port reported its busiest month ever in January, notching a 28 percent year-over-year increase, to nearly 434,000 TEU.

The rail and berth projects, which will also boost the total number of Savannah’s 22 ship-to-shore cranes to 37 by 2024, mark Savannah’s evolution from a port that became the third-largest by attracting the big box retailers, starting in the 1990s, to one that’s harnessing the e-commerce tailwinds and intermodal rail’s full potential. Savannah in the last 13 years has nearly doubled its share of US imports from Asia to 8.6 percent, according to a PIERS analysis.

Wayfair’s announcement in November that it will build a 1.25 million-square-foot facility at the Savannah River International Trade Park underscores how Savannah is riding rising e-commerce demand, thanks to cargo moving quickly and consistently through the terminal and into transload/cross-dock facilities. With about 1,000 people working at the fulfillment center, the facility will handle more container volume than a traditional big box retail distribution center since there will be a faster churn.

Griff Lynch, Georgia Ports Authority executive director, said in an interview with JOC.com that the third part of Savannah’s evolution hinges on maximizing its intermodal rail potential. While the share of containers moved via rail to total volume has expanded in the last five years from 16 to 18 percent to about 20-22 percent, Lynch is aiming to drive the intermodal share to 30 percent. Lynch said the focus is building Savannah’s connections to the largest and third-largest inland ports, Chicago and Memphis, respectively, much like it feeds the virtual inland port of Atlanta. He even sees potential in extending Savannah’s reach as far west as Kansas City.