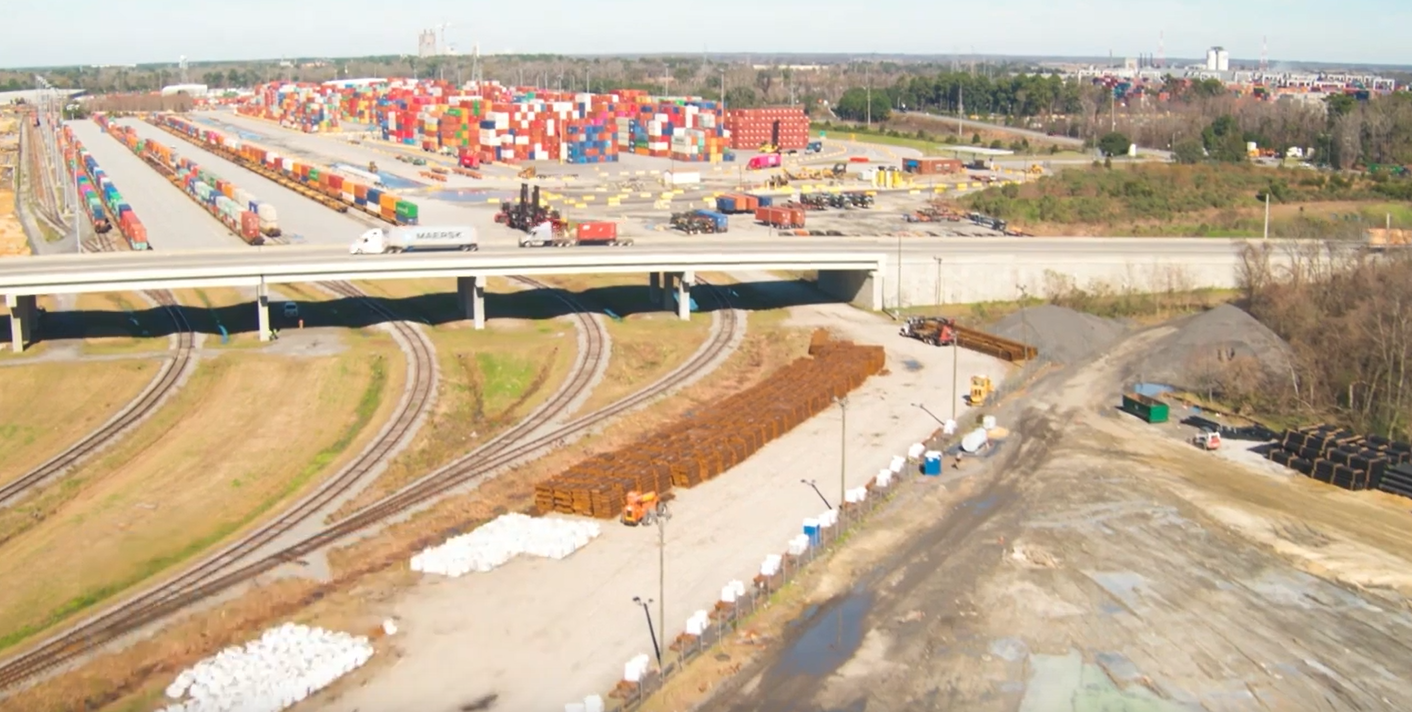 The top four US East Coast ports have further deepened their reach into the US interior, as total rail lifts grew about 7 percent in 2018, and each port is investing to send more containers inland each year.

There is a strong business case for the latter since 2 million containers were railed to and from the four ports total last year, an annual record. Three of the four — New York and New Jersey, Savannah, and Charleston — saw double-digit intermodal growth last year. Although the Port of Virginia lost business to New York, its intermodal capacity will grow in 2019 and the port can capitalize on CSX Transportation’s National Gateway corridor, providing double-stack service to the Midwest.

Intermodal rail has become a key selling point as East Coast ports court beneficial cargo owners (BCOs) in the mid-South and Midwest. Gone are the days when nearly all of the 14,000-TEU container ships went from Asia to the West Coast, thanks to the expanded Panama Canal. Before the canal expansion, the average capacity of vessels crossing was less than 4,000 TEU. Since then, the average has jumped to nearly 6,000 TEU, according to PIERS, a sister product of JOC.com within IHS Markit.

The East Coast share of Asian imports to the US rose 0.5 points to 31.3 percent in 2018, while the West Coast share slipped 1.1 points to 64.2 percent. Asian imports to the East Coast rose 9.1 percent to 5.3 million TEU. Each week, Asian cargo arrives on the East Coast in larger vessels, providing new opportunities to pursue BCOs from Illinois to Alabama. To fully capitalize, ports are expanding their rail infrastructure and teaming with Class I railroads to handle more volume.

The Port of New York and New Jersey, for example, opened a $149 million off-dock rail terminal near Global Container Terminals in Bayonne, New Jersey. The Port of Virginia will open its expanded Virginia International Gateway (VIG) on-dock yard this year. The port of Savannah will open the first half of the Mason Mega Rail project in 2019, making it possible to build 10,000-foot trains on site. The Port of Charleston will have a full year with its new Dillion, South Carolina, inland port to serve BCOs near the border of North and South Carolina.

The largest port on the East Coast handled 645,760 rail lifts in 2018, nearly 14 percent more than in 2017. Port officials believe 900,000 annual rail lifts are possible within five years, about 40 percent more than today, to handle 18,000-TEU vessels. A rail project in Bayonne, New Jersey, will help achieve this goal.

In early January, the Port of New York and New Jersey christened its fourth rail terminal, which has four new tracks connecting the terminal to Norfolk Southern Railway and CSX, and a third track on a route out of the port. Phase two will mean four additional tracks by the middle of the year, taking the total to 9,600 feet of track.

Last October, CSX announced a new service between the Port of New York and New Jersey and its intermodal hub serving the Ohio Valley in North Baltimore, Ohio.

The port expects discretionary cargo — containers to and from locations outside the New York metropolitan area — to grow faster than local cargo during the next two decades, propelling its overall rail share versus truck from 15 percent to 20 percent.

Some rail growth should come from CSX’s investment in Ohio because service from New York and New Jersey is quicker than its peers in the Mid-Atlantic or Southeast. CSX has partnered with NorthPoint Development to construct a 500-acre logistics park in North Baltimore including warehousing and distribution facilities.

New York and New Jersey’s gain came at the expense of Norfolk. The Port of Virginia reported a 3.1 percent decline in rail lifts to 552,318 in 2018, and its rail share versus drayage through its terminals fell from about 37 percent of traffic to 35 percent. Virginia remains ahead of the pack, however, in the percentage of volume steered to rail.

It’s not bad news the numbers fell; rather, it's New York and New Jersey winning back some freight it had lost previously, following the reopening of the Bayonne Bridge in 2017, which allowed for 14,000-TEU vessels to call terminals west of the span without any restrictions.

“The raising of the bridge made the competition to serve the Midwest more pronounced,” said Shawn Tibbetts, chief operating officer for the Virginia Port Authority. “Do we ever want to lose cargo? No. But that in a way has created an opportunity for us to be more fluid while under construction [at VIG]. But for us there is positive activity on the horizon and that’s what we’re focused on.”

An expanded VIG on-dock terminal capable of 10,000-foot double stack trains will be complete by the end of May, providing the capability to double its intermodal capacity.

“We have an opportunity to market this to customers and attract more cargo to Virginia,” Tibbetts said.

Port of Savannah expecting boost in 2019

Unlike Norfolk, Savannah reported rail volume rose 19 percent year over year in 2018 to 478,669 rail lifts. Nearly 20 percent of containers in Savannah end up on trains. Like Norfolk, however, the outlook is positive because of its Mason Mega Rail Project, which will increase capacity to more than 1 million lifts in the coming years.

The project is 25 percent complete as of now. NS’s half of the yard will be finished in October and CSX’s will be ready in 2020. Both railroads will be able to build 10,000-foot trains on site and slash transit times by as much as 48 hours, according to the Georgia Ports Authority (GPA).

“We are really in the thick of construction, and having that happen while also seeing the rail volume grow so much confirms to us we’re doing the right thing,” said Griff Lynch, GPA executive director.

Raising the rail share compared with drayage from 20 percent to 25 percent will require growth in the Mid-American Arc region. The GPA has more than two dozen trains that service the arc, focusing on Atlanta; Orlando, Florida; Birmingham, Alabama; Huntsville, Alabama; and Charlotte, North Carolina, as shorter hauls. The arc also includes medium-length hauls to Memphis, Tennessee; Nashville, Tennessee; and Louisville, Kentucky, and longhaul routes to St. Louis and Chicago.

The goal is achievable, but it’s a tall order because transloading, which requires a short local dray and then repackaging cargo into 53-foot full truckload trailers, is so popular in Savannah due to its proximity to Interstate 95.

Bolstered by a new inland port in Dillon, South Carolina, the port authority reported a nearly 15 percent increase in rail traffic last year to 512,035 TEU. The data only capture the cargo in its RapidRail program, which uses local draymen to haul containers to North Charleston. Actual rail lift data won’t be available until April, but it should be about 300,000 containers.

More than 22 percent of traffic in Charleston moves inland by rail, with the goal being 25 percent.

Although there are no new inland ports coming online in 2019, Charleston will benefit from the first full year of operation of Inland Port Dillon, although it’s been slow going so far.

“Inland Port Greer continues to be very successful and is growing. But most of these inland ports are slow to start because you’re introducing a new location. Once people figure it out, rail traffic will start moving,” said Jim Newsome, executive director of the South Carolina Ports Authority (SCPA).

He said some of the rail growth can also be attributed to the electronic logging device (ELD) mandate, which has caused truckers to adhere more strictly to hours-of-service (HOS) regulations. Round-trip drays that were illegally done from Charleston to Atlanta, about five hours each way, and Charlotte, about 3.5 hours, are now being converted to rail, said Newsome.

SCPA could reach its 25 percent goal by increasing traffic to Greer and Dillon. It will also get a boost when the Leatherman Terminal opens in 2021, which has easier access to rail. Barge service will begin in 2022 to take containers from the Wando Welch Terminal to Leatherman.

With ports building out rail infrastructure and offering BCOs more service, options open up for global logistics directors to investigate how much drayage they need in their supply chain and whether it might be cheaper to rely on a truck for a shorter final step to the loading dock.