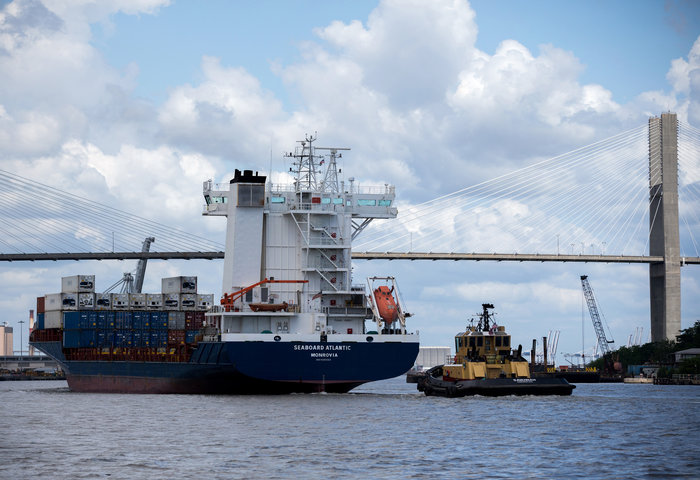 The Seaboard Atlantic Monrovia (above) is the first vessel in a series of new strings transporting refrigerated containers between Savannah and Central America, South America, and the Caribbean. Photo Credit: Georgia Ports Authority

The first Seaboard Marine vessel in a new weekly string from Central America visited the port of Savannah on May 8, building on the the US Southeast top port effort to attract more refrigerated cargo.

Cargo on this new trade lane is typically in refrigerated containers with fresh produce coming in from Guatemala, El Salvador, Nicaragua, Honduras, and poultry exports heading out of Georgia. Seaboard will also begin weekly service in June with Colombia, Ecuador, Peru, Costa Rica, Panama, and a dozen Caribbean countries.

These additions will bring Savannah up to 37 weekly services, tied with New York and New Jersey for the most on the East Coast.

All these new businesses into Savannah’s growing refrigerated warehousing industry in the Southeast after recent completion of the US Department of Agriculture’s Southeast In-Transit Cold Treat Pilot program. This not only allows required USDA treatment to prevent against food-borne illnesses to be done in Savannah, but also shortens the window to reach shoppers in the Southeast compared with the previous supply chain of using Northeast ports and trucking perishables into the South.

“We’ve been working on the concept of being a key player in the produce sector for years and now it’s all coming to fruition,” GPA executive director Griff Lynch told JOC.com.

The port of Savannah's Garden City Terminal operates 119 electric-powered refrigerated container racks capable of handling 3,341 boxes at a time, including 485 plug-ins for chilled containers on chassis.

The Port of New York and New Jersey dominates the refrigerated import market on the East Coast with a 15 percent share of refrigerated imports in the US, according to PIERS, a sister product of JOC.com within IHS Markit. By comparison, Savannah has a 3 percent share, Norfolk 2 percent, and Charleston 1 percent. Savannah, Norfolk, and Charleston’s market share has been relatively constant between 2016 and now — shifting less than a percentage point. In 2017, Savannah imported 43,358 reefer TEU, Norfolk had 32,065 TEU, and Charleston had 13,102 TEU. The new central American Seaboard Marine is expected to add another 20,000 TEU annually, according to the Georgia Ports Authority (GPA).

Central America has been as much a growing business line as South America for the GPA. Imports from Central America have surged 70 percent in the prior five years and the compound annual growth rate during the period is 9.3 percent. About a quarter of all Central America volume to the East and Gulf coasts go to New York and New Jersey, but Savannah is No. 2 with more than 16 percent.

"The new North Central American service and the addition of port of Savannah is an ideal gateway," said Jose Concepcion, Seaboard Marine vice president for Central America. "We are excited about the opportunity to connect our brand of premium service forged over our 35-year history in Central America to this new domestic port."

“PortFresh is doing so much business that there are major importers knocking on their doors and it has simply run out of space and looking to add more as quickly as they can get it,” Lynch said.