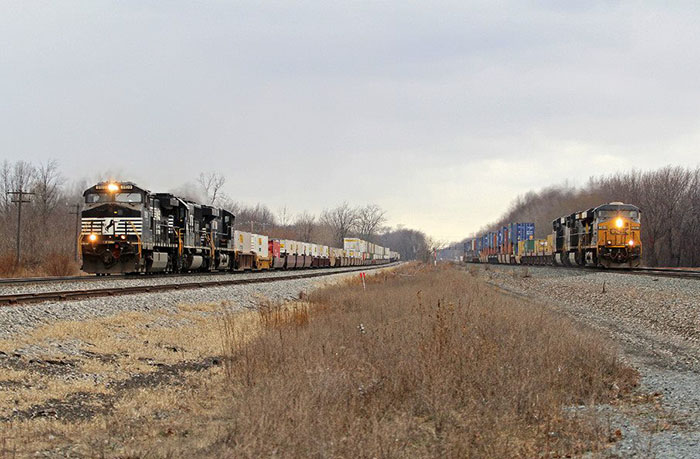 Billed as the “Mid-American Arc,” the GPA’s rail-focused initiative will allow the port to better serve markets from Atlanta to Memphis, St. Louis, Chicago, and the Ohio Valley — a region that southeastern ports up and down the coast are aiming to break into as they fight for larger shares of the US Asian import market.

Georgia port officials believe their port can achieve that goal through a series of infrastructure investments beginning with the construction of a $128 million project linking the Savannah Garden City Terminal’s Norfolk Southern Railway and CSX Transportation operations.

“I’m calling it a mega-rail facility,” GPA Executive Director Griff Lynch told JOC.com shortly after announcing the project at the GPA’s State of the Port address.

The mega-rail facility announcement comes on the heels of the state port authority’s finalized plans for the second of six planned inland ports that together emphasize a concerted focus on intermodal business in Georgia.

The on-dock facility, made possible in part by a $44 million federal grant through the new FASTLANE initiative, will roughly double the terminal’s current rail lift capacity from 500,000 to 1 million. It will also allow the GPA to build 10,000-foot unit trains on site, without disrupting nearby traffic and reducing rail crossings.

Georgia already features 25 trains per week to and from destinations in its so-called Mid-American Arc, with cargo moving from vessel to rail within 24 hours and guaranteed 24-hour service for priority boxes, besting competitors such as Virginia, which boasts a 36-hour dwell time. The unit-train capabilities, though, will provide a new option to shippers, delivering more reliable and consistent access to the heartland.

The rail facility is in its design phase today, Lynch told JOC.com, and is slated to be up and running by 2019.

Savannah is not typically seen as an entree into the Midwest, Lynch said. Although the Georgia official hopes the new intermodal initiative will highlight just how close Midwest markets are to the southeastern port — within 1,000 miles, comparable to other points of entry farther north, such as its smaller rivals, Charleston and Virginia.

Southeastern ports are aiming to extend their reach inland in the wake of the Panama Canal expansion project, which wrapped up this summer. The expanded canal can now handle ships with capacities up to 14,000 twenty-foot-equivalent units, potentially creating greater economies of scale for shippers to move goods to the East and Gulf coasts to penetrate eastern and Midwestern markets.

That is expected to extend East Coast ports’ reach into the heartland.

“You have big ships coming to the East Coast. They’re coming to Savannah. On some services we’ll be the first port of call; on others we’ll be the last. We stand to significantly increase our intermodal percentage. What we need is the footprint to handle that volume,” Lynch said.

Georgia officials know their waterfront is capable of handling Asian imports, especially after the port welcomed an influx of diverted cargo during the chaos at US West Coast ports in 2015. The congestion spurred by protracted labor negotiations there left some shippers with no other choice but to use East Coast ports of entry and allowed those eastern ports such as Savannah to market their themselves to shippers that typically used only West Coast terminals.

Much of that diverted cargo has since returned to West Coast ports of entry. Savannah today holds the largest share of the Asian import market in the Southeast at just more than 26 percent, according to an analysis of data from PIERS, a sister product of JOC.com within IHS Markit. Between January and August of 2016, however, the Georgia port saw its share decline roughly 5.5 percent year-over-year. Lynch has previously said this is a result of some cargo shifting back to the West Coast.

Initiatives such as the Mid-American Arc could help to stem that decline and attract additional imports to Savannah’s Garden City Terminal, and there is more than just one project underway at the terminal today, Lynch noted Thursday during his State of the Port address.

Garden City, already the largest single-operator terminal in the nation, will add eight ship-to-shore cranes by 2018, for a total of 30. Moreover, the Savannah Harbor Expansion Project underway is expected to be completed by 2020 and will deepen the waterway to 49 feet at low tide and 56 feet at high tide.

Savannah may be making strides, but the competition for imports on the East Coast is fierce, and Georgia isn’t the only competitor in the race.

Charleston is now deepening its harbor to 52 feet, strengthening its Wando Welch terminal to handle ship-to-shore cranes that are 155 feet high, compared with traditional cranes’ height of 115 feet, and implementing an automated gate system at the terminal. The harbors of the ports of Miami and Virginia are already 50 feet deep; Virginia is considering going even deeper, recently announcing a new $350 million investment to increase container capacity at one of its terminals. The Port of New York and New Jersey earlier this month completed its 50-foot deepening and work to raise the Bayonne Bridge roadway to allow larger ships to service the port’s largest terminals is expected to be finished by the end of 2017.