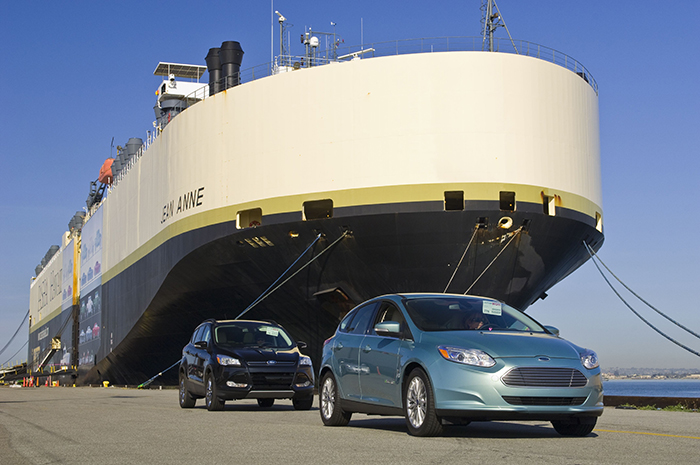 Cars are unloaded from the Jean Anne, the first ship to call the Port of San Francisco's Pier 80 in 2016. Credit: Dave Rauenbuehler

Pasha Automotive Services has launched a car-carrier service to the Port of San Francisco’s moribund Pier 80 under a 15-year lease with the port.

The Jean Anne, a pure car and truck carrier, delivered 500 automobiles to the terminal Monday for distribution to northern California dealerships.

Pasha Automotive, a subsidiary of Pasha Group, said it could move up to 150,000 vehicles a year from Mexico, Asia and Europe on about 96 vessel calls annually at the terminal. The carrier said the service also may handle project, breakbulk and other roll-on, roll-off cargoes.

Pier 80, the main cargo terminal at San Francisco, had not handled a ship this year before Monday’s call, and was partly occupied by homeless people. The 69-acre terminal near the city’s southeastern corner has two warehouses and four deep-sea ship berths.

Port and company officials said Pasha’s vessel calls will employ about 50 International Longshore and Warehouse Union workers, and that the terminal and processing facility will employ about 150 workers at full operation.

Under an agreement with CityBuild, a city-supported jobs program that screens and qualifies potential workers, local residents will be given priority for the vehicle-processing jobs.