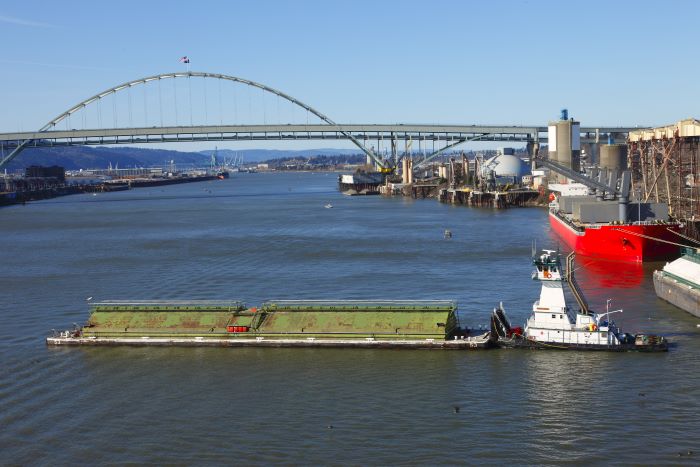 SM Line will restore weekly container service to Portland, Oregon, at the end of the year, announcing the move less than two weeks after a federal jury slammed the International Longshore and Warehouse Union (ILWU) with a crippling $93 million penalty for damages caused by work slowdown at the port. It will be the first liner activity at the port after a two-year absence caused by the labor disruptions.

The Port of Portland on Tuesday announced that South Korea-based SM Line is adding the port to its existing Asia-Pacific Northwest Service that includes calls in Vancouver, B.C., and Seattle. The first vessel will leave Ningbo, China, on Dec. 22 and is scheduled to arrive in Portland in January.

In a notice to customers, SM Lines announced the addition of Portland to its Pacific Northwest service known as PNS. The port rotation, with vessels of 4,300 to 4,500 TEU capacity, will be Yantian, Ningbo, and Shanghai, China; Pusan, South Korea; Vancouver, Seattle, and Portland, then back to Pusan, Kwangyang, Ningbo, and Yantian. SM Line, which picked up some of the trans-Pacific service that Hanjin operated before it declared bankruptcy in 2016, operates two weekly trans-Pacific services.

Oregon and the Port of Portland have been marketing the port’s strategic location for exports as well as imports, with a delegation led by Gov. Kate Brown visiting with SM Line officials on a recent trade mission to South Korea.

“Oregon sent $1.7 billion in exports to South Korea last year,” Brown said in a statement. “During our recent trade mission, we met with SM Line executives and made the case for continuing connections with our trading partners in Asia. I’m delighted they made the decision to come to Portland.”

Portland has been without regular liner service since 2017 when Hanjin Shipping Co., Hapag-Lloyd, and Westwood Shipping ended their calls due to a dispute between the ILWU and International Container Services, Inc. (ICTSI), which operated Terminal 6. The container lines pulled out of Portland after five years of work slowdowns that slashed crane productivity from 30 moves per hour to close to 20.

On Nov. 8, after a two-week jury trial, the US District Court in Portland awarded ICTSI $93 million in damages from the lengthy dispute. The ILWU asked the judge to delay entry of the judgment while both parties file additional paperwork. Legal options being considered include a request for a reduced judgment, a filing for bankruptcy protection by the union, and assessing a levy of reportedly as much as $10,000 on each ILWU member coastwide to pay the settlement.

Permalink Submitted by MariettaWithnel... on Nov 30, 2019 7:55AM EST
Ahaa, its pleasant dialogue regarding this piece of writing at this place at this web site, I have read all that, so now me also commenting at this place. Also visit my blog :: youtube mp3 converter - http://sellikea.com/index.php?page=item&id=40123

Permalink Submitted by MariettaWithnel... on Nov 30, 2019 7:55AM EST
Ahaa, its pleasant dialogue regarding this piece of writing at this place at this web site, I have read all that, so now me also commenting at this place. Feel free to surf to my blog - youtube mp3 converter - http://sellikea.com/index.php?page=item&id=40123
Port News›US Ports›Port of Portland (Ore.)
Maritime News›Container Lines›SM Line
Port News›Longshoreman Labor›International Longshore and Warehouse Union
North America›United States