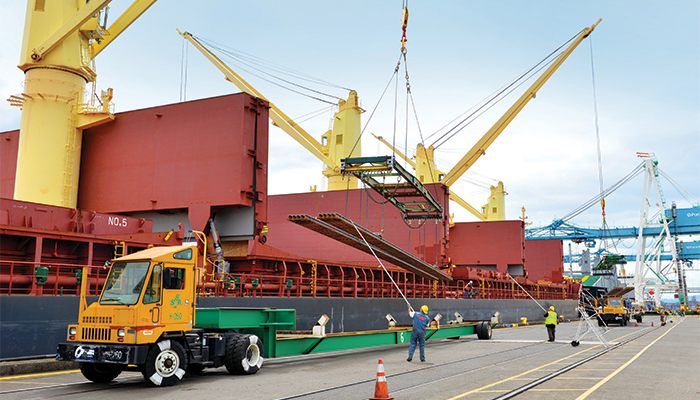 Crane productivity at the Port of Portland in Oregon fell from about 30 moves an hour to 20 during a union slowdown that was the focus of the federal suit. Photo credit: Port of Portland, Oregon.

Saying the judgment could put the union into bankruptcy, a federal judge on Friday delayed the filing of a $93 million jury award against the International Longshore and Warehouse Union (ILWU) for unlawful labor practices that led to the loss of the sole container service in the Port of Portland, Oregon, in 2016.

Judge Michael H. Simon, sitting in Portland, granted the union’s request for a delay while it argued for a retrial, saying the award is “quite high and may result in the bankruptcy” of the 84-year-old union, according to an order filed with the court.

The federal jury in Portland on Monday found the ILWU and its local chapter at the port, Local 8, engaged in unlawful labor practices at times between Aug. 14, 2013 and March 31, 2017. The union slowed productivity in a dispute over whether it had jurisdiction over jobs managing refrigerated containers. The jury also found those labor practices were a major factor in causing damages to ICTSI Oregon, Inc., the port’s terminal operator at the time.

The judgment is more than eight times as much as the union’s 2018 income, according to the union’s latest filing with the US Department of Labor (DOL).

The $93 million ruling presents a major blow to the ILWU just four months after it failed to prevent APM Terminals from securing the go-ahead to move forward on installing hybrid electrical charging stations for automated straddle carriers at the operator’s terminal in the Port of Los Angeles.

William E. Adams, the ILWU’s president, told members that the ILWU Longshore Division will hold a special caucus to discuss the outcome of the trial, which he said was based on “flawed” conclusions by the National Labor Relations Board (NLRB) and “unreliable evidence” of the damages suffered by ICTSI. He added that the union will appeal “if necessary.”

Elvis Ganda, president and CEO North America for ICTSI Oregon, Inc., a unit of a large Philippines-based terminal operating company with operations in many countries, said the court had held the “appropriate parties responsible for violations of the law that resulted in the critical impairment of operations at Oregon’s only container terminal.”

“The jury’s decision validates ICTSI's determination to seek justice in an unfortunate situation that impacted many local businesses, communities, and the people that depended on Terminal 6 as a vital connection to international trade,” Ganda said in a statement from the company.

The federal court ruling is the latest development in a seven-year dispute that began in 2012 when the ILWU implemented a work slowdown as part of its fight with the International Brotherhood of Electrical Workers (IBEW) over which union had jurisdiction over the plugging, unplugging, and monitoring of refrigerated containers. During its many years as an operating port, Portland had contracted with the IBEW to plug and unplug refrigerated containers, although there were only two jobs at issue in the dispute.

The ILWU sought jurisdiction over the refrigerated container work after the port chose ICTSI as a private operator to run the port in 2012. The ILWU reduced productivity at the terminal to about 20 gross container moves per hour, about 10 moves below the port’s historic average. And in 2015, Hanjin Shipping, Hapag-Lloyd, and Westwood Shipping — the only container lines in the port — discontinued their regular liner services due to the poor productivity.

As a result, Portland container volumes plunged from 162,984 TEU in 2007 to 4,331 TEU in the first nine months of 2017. In response, the port and ICTSI in 2017 agreed to terminate the 25-year lease with the operator in an effort to get the support of ILWU to restart container operations.

Global Shipping Outlook: A Sneak Peek at 2021
Port Performance North America: Managing Cargo Flow During a Pandemic — and Beyond
END_OF_DOCUMENT_TOKEN_TO_BE_REPLACED