Philadelphia to be 14,000-TEU ship ready by April

Philadelphia to be 14,000-TEU ship ready by April 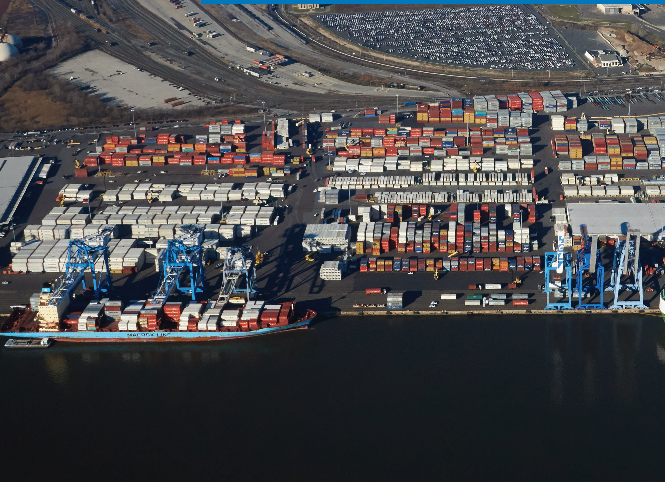 The US Army Corps of Engineers last week approved the final payment of $29.2 million to finish the job. “With this funding in place, we can now say the new 45-foot channel plus six-foot tidal window will be 100 percent complete by the first quarter of 2019,” PhilaPort said. Photo credit: Port of Philadelphia.

The more than three-decade old dredging project that will enable the Port of Philadelphia to handle ships of 14,000 TEU is set to be finished by end of March as the port nears the end of the first phase of a $300 million upgrade that eventually will double the size of its only container terminal.

The deepening project — which will take the channel depth to 45 feet on a 103-mile stretch of the Delaware River, from the river mouth to Philadelphia — is finished except for a 10-mile stretch about 20 miles down the river from the port. The largest ship handled by the port at the current 40-foot depth was 12,200 TEU.

The US Army Corps of Engineers last week approved the final payment of $29.2 million to finish the job, the Army Corps and the Philadelphia Regional Port Authority, known as PhilaPort, said. “With this funding in place, we can now say the new 45-foot channel plus six-foot tidal window will be 100 percent complete by the first quarter of 2019,” the authority said.

The approval comes as Philadelphia is soon to face tougher competition from the Port of Wilmington, Delaware, about 35 miles south on the river, which signed a 50-year lease this year with a new operator, Gulftainer. The Sharjah, United Arab Emirates-based terminal operator — with facilities in Brazil, the Middle East, and Port Canaveral in Florida — says it will invest $600 million to upgrade the port’s existing container terminal and build a new one, taking the capacity from about 350,000 TEU to 1.8 million.

Like Philadelphia, Wilmington is prominent in the refrigerated cargo sector, handling the second-largest volume of reefer cargo on the East Coast, behind the Port of New York and New Jersey. Philadelphia is third.

Philadelphia, the ninth-largest port on the East Coast by container volume, handled 286,128 loaded TEU in the first three quarters of 2018, a 3 percent increase over the same period in 2017, according to data from PIERS, a JOC.com sister product. Imports accounted for about four-fifths of the total, and the port’s 2.2 percent share of the East Coast market remained the same during the nine-month period as it had been in the period in 2017.

In 2016, Pennsylvania pledged $300 million for a four-year package of improvements at the Port of Philadelphia, with most of the funds going to pay for an expansion of the Packer Avenue Container Terminal. The improvements will expand the terminal’s annual capacity to 900,000 TEU, from the current 400,000 TEUs when the project start, and allow for future increases if needed to 1.2 million TEU.

The Delaware River dredging project was conceived in the 1980s, but it was stalled for several years and only began construction in 2010, said Lisa Magee, chief engineer for PhilaPort. Among the opponents to the project early on were oil companies, which in the late 1990s controlled 70 percent of the cargo on the Delaware Bay and River, and who believed that the dredging would force them to dredge their own docks deeper. Three-quarters of the project was financed by the federal government, and Pennsylvania paid the rest, Magee said. Neither New Jersey nor Delaware contributed funds to the dredging project, although both have ports on the river and will benefit from the deeper channel.

Sean Mahoney, a spokesperson for PhilaPort, said that computer simulations showed that the dredged channel could handle ships up to 14,000 TEU, “however, based on those simulator exercises it was the belief of the participants that vessels larger than 14.000 TEU could be handled in the Delaware River.”

The first phase of the terminal upgrade will be completed by the end of 2019. Renovations of 1,500 feet of berth mean the terminal will be able to handle two mega-ships, which each have a 22-container-width. Two new cranes delivered in June as part of the upgrade are up and running after construction was finished to strengthen the berth to take the extra weight, Magee said.

Two additional cranes will arrive in March, and a third will arrive by the end of the year, by which time two warehouses also will have been removed to create additional space for container storage, the authority said. The terminal will also be wired to support electrification of existing diesel-powered cranes and to provide shoreside power that ships can use to avoid burning diesel while docked.

Philadelphia is one of a number of East Coast ports dredging their channels or berths to accommodate larger ships that are expected to come up the coast more frequently as a result of the opening of the expanded Panama Canal in June 2016. Charleston, Savannah, Jacksonville, Boston, and Port Everglades are all deepening their channels so they can regularly handle heavily loaded ships of up to 14,000 TEU.

How to Improve OTIF: 15 Tips for On Time and In Full Delivery
END_OF_DOCUMENT_TOKEN_TO_BE_REPLACED