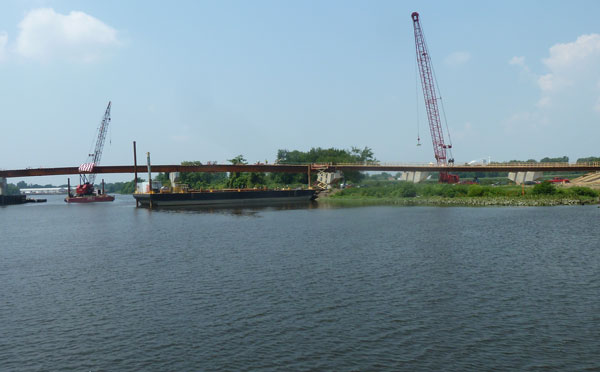 An antlered stag and three or four does scrambled for the cover lining the bank of the Delaware River as a pilot boat pulled into the mouth of Mantua Creek on a scorching Friday in July to look at the site of a large new bulk and breakbulk terminal under construction in Paulsboro, N.J.

The deer vanished into the brush and marsh grass being preserved along the creek as part of the extensive environmental mitigation the project must adhere to as part of its permitting process. Visitors on the pilot boat could see the new bridge being built over the creek that will carry trucks onto an access road that will take traffic off the streets of Paulsboro and directly onto Interstate 295.

South Jersey Port Corp. is building the terminal on two brownfield sites totaling 180 acres where a BP liquid bulk terminal and a Dow Chemical plant once stood. SJPC also operates three other New Jersey bulk and breakbulk terminals, two in Camden and a small one in Salem.

The new terminal will benefit from the deepening of the Delaware River to 45 feet. It eventually will have four 45-foot-deep berths along the 2,400 linear feet of bulkhead that already has been built and will be filled in to accommodate cranes and other port gear. It also will have a shallower, 500-foot barge berth with a 20-foot draft.

The Paulsboro terminal is designed to handle a variety of cargo. “We’re wide open to forest products, steel and bulk cargoes,” said Ken Castagnola, SJPC’s executive director and CEO. “We’re very close to having some tenants there who will make infrastructure improvements to meet their needs.”

That infrastructure could include reefer plugs for refrigerated containers and/or liquid bulk facilities, he said.

Together with environmental mitigation and the $23 million bridge and access road, SJPC is spending some $175 million on Phase 1 of the terminal, which will open at the end of 2015, just before the Delaware River deepening project is scheduled for completion.

The terminal will have an on-dock rail spur that Conrail will operate and connect with Norfolk Southern and CSX trackage. The terminal’s eventual rail cargo throughput also will benefit from an $18.5 million TIGER grant to rehabilitate the access tracks to the rail bridge that carries cargo across the Delaware through North Philadelphia to the Midwest.