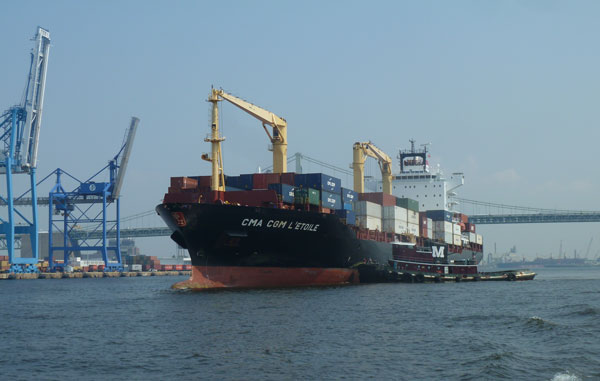 When Great Lakes Dredge and Dock began deepening Reach A of the Delaware River around Philadelphia last September, it ran into an unexpected obstacle. An enormous chain resting on the river bed wrapped itself around the teeth of the dredge, grinding it to a halt for a couple of days. That wasn’t all it encountered. It later dredged up a washing machine and part of a refrigerator.

But those were far from the biggest obstacles for the $303 million project to deepen the river to 45 feet from 40 feet. Political and environmental opposition in New Jersey and Delaware delayed the project for 20 years. Although the deepening of the 110-mile channel would benefit all of the ports on the river, including the Port of Wilmington, Del., and the New Jersey ports of Camden, Gloucester and Paulsboro, only Pennsylvania was willing to act as the local sponsor of the project. It agreed to pay for 35 percent of the project, or more than $100 million, with the U.S. government funding the other 65 percent.

All that’s in the past now, and Delaware, at least, is fully behind the deepening. “The important thing is that the dredging is under way,” said James T. McDermott Jr., executive director of the Philadelphia Regional Port Authority.

The planned start of dredging last September was the catalyst allowing the PRPA to launch a second request for bids on a new container terminal to be built on 120 acres of land on the old U.S. Navy Base at Southport in South Philadelphia. The successful bidder was Delaware River Stevedores, a 50-50 joint venture between Ports America and Stevedoring Services of America.

The first RFP failed because it was launched just as the Great Recession took hold in 2009 and the bidders couldn’t find the project financing, and because the dredging wasn’t a done deal. “Everything was conditional on the dredging,” McDermott said.

The planned two-berth terminal, which will have an estimated cost of $300 million to $400 million, will have a target capacity of 750,000 20-foot-equivalent container units annually when fully built out. The first berth is targeted for completion in 2017, and the second 18 months later.

Together with the 450,000-TEU Packer Avenue Marine Terminal, Southport will give the Port of Philadelphia total capacity of some 1.2 million TEUs. The PRPA owns another 73 acres on the river, called Southport West, next to the Southport terminal site that could be used for a new auto terminal, for distribution centers or by Delaware River Stevedores to expand its container yard. Norfolk Southern and CSX Transportation have intermodal container terminals abutting the Southport site.

Although the PRPA has yet to negotiate a lease for the project with DRS, it plans to start construction in early September on a private four-lane highway for trucks to operate from Packer Avenue Terminal over the old airplane runway on the Navy Yard Base and feed into Interstates 95 and 76. McDermott expects the PRPA and DRS will be able to negotiate a financial plan, lease term and construction plan for the terminal by year-end.

Even before the contract is negotiated, the PRPA is attracting interest from carriers that have never called there. “We’ve actually had Asian carriers in here expressing interest, where we used to have to chase them,” McDermott said. “They have been in here looking at our capabilities.”

The Delaware River ports have never been a destination for container services on the all-water route from Asia to the East Coast, because the river’s 40-foot draft wasn’t deep enough to accommodate heavily laden ships and because the ports focused more on the north-south trades with the Caribbean, South America, West Africa and Australasia.

The ports on both sides of the river make up a diversified collection of terminals that serve dry and liquid bulk, and breakbulk ships, as well as container ships. The ports have carved out a specialized niche in fresh and frozen produce imports in refrigerated ships as well as in reefer containers. Collectively, the Delaware River ports make up the largest reefer port complex in the country.

“They have an infrastructure for the reefer trade that gives other ports a high barrier to entry,” said John Martin, principal of port consultant Martin Associates. “They have a strong relationship with the food brokers.” He cautioned, however, that other ports are starting to build their own reefer capabilities as more of the business shifts into refrigerated containers and out of refrigerated ships.

Some carriers prefer Delaware River ports to other ports for more reasons than its refrigerated capabilities. “Whenever I ask a question of terminals in New York, the answer I get is no,” said Jeffrey Parker, vice president of customer service for Hamburg Sud North America, which specializes in the north-south trade. “In Philadelphia, the terminals bend over backward to meet our needs.” Delaware River terminal-handling charges also are lower than in the Port of New York and New Jersey.

Even without a 45-foot channel, the Port of Philadelphia, whose Packer Avenue Terminal handles most of the Delaware River ports’ container trade, is posting strong volume growth. In the first six months of 2013, container throughput jumped 24 percent, largely on Horizon Lines’ shifting its Northeast U.S. call in its Puerto Rico service from New York-New Jersey to Philadelphia in April. Total tonnage of all kinds of cargo increased 13.6 percent.

“We are a broad-spectrum port, handling steel, bulk, breakbulk as well as autos and containers, and each year growth has been fueled by something different,” McDermott said. “Two years ago, automobiles drove growth, and this year it’s been containers.”

When the river dredging is completed in 2016, the deeper channel will give the terminals at Packer Avenue and Southport a new capability to handle the post-Panamax ships that will start coming through the expanded Panama Canal. “A 45-foot channel will be able to handle 82 percent of the vessels on the waters of the world, because its two feet of leeway actually gives us 47 feet,” McDermott said. “I think carriers would come in here rather than the West Coast, given the busyness of the ports of Los Angeles and Long Beach. They might find it economically viable to come in here and ultimately discharge their final cargoes in New York.”

Until then, the U.S. Army Corps of Engineers will have to complete the remaining 40 percent of the dredging project. The toughest part of the dredging, the four to five miles of Reach B in the area around Marcus Hook below Philadelphia Airport down to the Delaware Memorial Bridge where the river bed is made up of hard rock, may require the corps to use explosives.

“We have undertaken significant studies to determine how much of the rock can be mechanically removed, in order to minimize the amount of blasting required,” said Lisa Urban Magee, the PRPA’s director of special projects and chief environmental engineer.

McDermott already is looking beyond the completion of the deepening project. He wants to orchestrate a follow-up effort to get the river deepened to 50 feet, so it can compete with other East Coast ports, such as Baltimore and Norfolk, which already have that depth, or New York-New Jersey, which will have it next year.

“I want to get the channel down to 50 feet between the Bay and the Walt Whitman Bridge,” he said. “Although we’ll be able to handle 82 percent of the vessels being built today, nobody is building smaller ones. We want to make Southport and Packer Avenue as attractive as we can.”