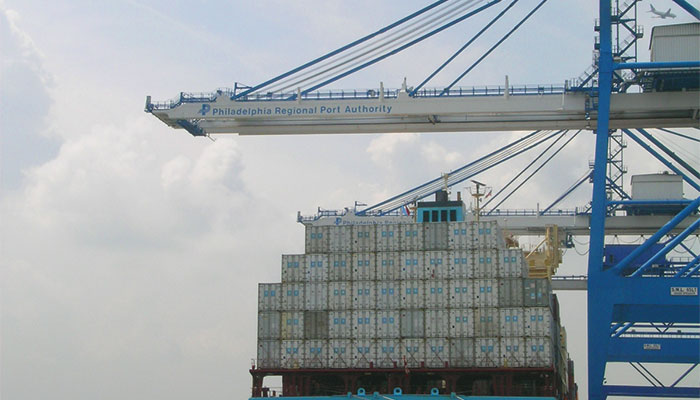 Armed with tens of millions of dollars in improvements, the Port of Philadelphia is taking aim at discretionary cargo moving through northeastern competitors, hoping to convince shippers of refrigerated and dry cargo that the port offers a quicker, easier way to access the markets of eastern Canada and the Midwest.

The strategy is backed by a $300 million renovation plan, announced in November, that includes $200 million to double the capacity of the port’s Packer Avenue Container Terminal, to about 900,000 twenty-foot-equivalent units annually, and add cranes, expand warehouse space, and redo the port’s electrical system. A dredging project in the Delaware River, expected to be finished by the end of the year, will take the port’s depth to 45 feet from 40 feet, and enable the port to handle 14,500 TEUs. The port can handle ships of 9,400 TEUs currently.

How much that will increase the port’s market share remains to be seen. As the ninth-largest port on the US East Coast, Philadelphia had less than 2 percent of the East Coast container market in 2015, and its share edged up only 0.08 percentage points from 2015 to 2016. The port’s main business is with Latin America and Europe, and it has no direct container services from Asia.

Yet the port hopes to leverage its status in the reefer market, where it handled about 13 percent of the East Coast’s loaded import reefer volume in 2016. The port’s increase of 0.2 percentage points in market share from 2015 to 2016 compared favorably with the two largest reefer ports on the coast — market leader New York-New Jersey and the second-placed Port of Wilmington, Delaware. Wilmington, with a 20.8 percent reefer market share, experienced no increase between 2015 and 2016; New York-New Jersey’s market share declined slightly from 26.66 percent in 2015 to 26.25 percent last year.

The port is “targeting every port in the US Northeast and eastern Canada for discretionary cargo, as they target us,” said Dominic O’Brien, senior marketing representative for the Philadelphia Regional Port Authority. The port’s reefer expertise, particularly for handling fruit, could provide refrigerated “anchor cargo” that helps bring new services to the port, including dry cargo, he said.

Potential reefer business for the port’s expanded capacity include Brazilian, Irish, and Namibian fresh and frozen beef, which was recently approved for import into the US for the first time, O’Brien said. “Similarly, with Peruvian fruit and vegetable exports growing at 25 percent, we will get much of this growth also,” O’Brien said.

Reefers account for about 38 percent of the Port of Philadelphia’s loaded container volume, the port said. That was about 112,000 containers in 2016. The business began in the 1960s, when Chilean fruit shippers, disgruntled at the treatment they were getting in New York as it transitioned to a container business, began sending products through Philadelphia, port officials say.

The port’s reefer sector grew about 20 percent in 2015 from 2014, and by 5 percent year-over-year in 2016, according to data from PIERS, a sister company of JOC within IHS Markit.

And cold-product infrastructure is rising to meet the demand. Matthew Marshall, managing director of Cushman & Wakefield, covering the South Jersey and Eastern Pennsylvania region, said the cooler/freezer warehouse sector in the South Jersey area, which stood at about 4 million square feet of warehouse space in 2016, is growing at about 20 percent per year. 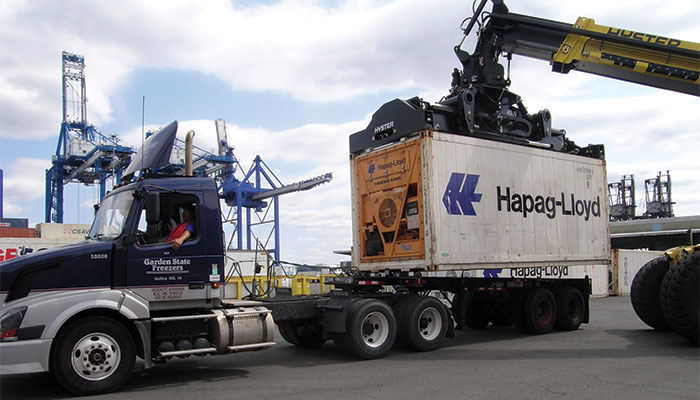 Whether it targets dry goods or refrigerated products, Philadelphia faces tough competition, however. Ports up and down the coast are dredging, improving terminals, and adding equipment in the hope of attracting the expected, upcoming wave of big ships, especially after the expansion of the Panama Canal enabled larger ships to pass through the canal.

The Port Authority of New York and New Jersey, whose port has endured a slight decline in East Coast market share in recent years after bouts of congestion and delays, rebutted Philadelphia’s aspirations by pointing to New York-New Jersey’s own improvements.

“The port has invested billions of dollars to deepen port channels, raise the Bayonne Bridge, build rail facilities at all of our terminals, and expand the port’s road network to enhance its capacity and efficiency,” the port said in a statement. “These investments and other initiatives being undertaken will serve to enhance port efficiency and make it an even more attractive destination for international shippers.”

Philadelphia officials, however, say the industry is moving in their direction. They point to the large warehouse cluster that has grown up in Central Jersey in recent years, around Exit 8a on the New Jersey Turnpike. The zone can be reached in about an hour’s drive from Philadelphia, only about 20 minutes longer than from the New York-New Jersey terminals around Newark.

“A lot of people, when they ship to the Port of New York, think that their ultimate destination [before distribution] is Newark,” Mahoney said. “It isn’t.” Often the cargo goes to warehouses outside of New York, many of which are almost as close to Philadelphia, he said. Add to the equation the fact that the average turn time in Philadelphia is less than an hour, enabling several moves a day, whereas in New York-New Jersey a two-hour-or-more turn time is not uncommon, and more than one turn a day is often tough — and the Pennsylvania port becomes more competitive, officials say.

Likewise, Toronto is about the same distance from Philadelphia as it is from New York, they say. And they add that Philadelphia has been made more attractive by the dramatic growth in the warehouse market in the Lehigh Valley, a Pennsylvania location just across the western New Jersey border. The sector is about the same driving time — about 90 minutes — from Philadelphia and New York-New Jersey. The growth there prompted an executive for real estate services firm CBRE in an interview last year with The Journal of Commerce to dub it the “Inland Empire of the East Coast,” likening it to the mammoth warehouse district outside Los Angeles.

The challenge for Philadelphia, however, is in convincing shippers and logistics providers to accept a new warehouse location, O’Brien said.

“It’s getting them to change that thinking,” and start realizing that “Philly is right here. You can avoid the congestion, delays, hassle, headaches, and problems of New York, and just get right in there. We are faster off the crane, we have better productivity off the cranes, we have less congestion on the dock. We are quicker out the gate. We are quicker on the highways down there.”

The port has no trans-Pacific container routes, but has two trans-Atlantic routes and several north-south routes.

The new routes are the kind of development that prompted the $300 million plan announced by Gov. Tom Wolf. It followed a nearly decade-long effort to expand the port by developing a tract of land known as Southport, which failed to come to fruition. Initial plans to build a two-berth container terminal with capacity of 750,000 TEUs collapsed after the 2009 recession. And a bid by Ports America and SSA Marine fell through in 2014 after Hyundai Merchant Marine pulled out, and no other carrier would take its place. A third effort, seeking to leverage oil shipments, drew bidders, but the process was never concluded.

Port officials say the Southport project could be revived at some point, but the latest port proposal is a more “expedient way to take advantage” of the conclusion of the dredging project. The “financials weren’t coming together,” in the previous plan, one port official said.

The new plan is designed to accommodate the growth in the port’s auto and container businesses, officials said.

About $12 million will go to improve the port’s Tioga Marine Terminal, including the renovation of the terminal’s main on-dock warehouse, which handles and processes Brazilian wood pulp, converting a second warehouse into a food-grade warehouse, and improving rail tracks to increase capacity.

A $90 million investment in the port’s automobile operation will enhance the existing auto site in hopes of doubling the current figure of 150,000 vehicles handled per year. Much of this consists of imported Hyundais and Kias, some of which come from Mexico.

Mexico has been the focus of a vigorous outreach effort that Philadelphia officials say would boost port business. For three years, the port and port community, through its non-profit marketing organization, Ship Philly, courted Mexican growers, manufacturers, and shippers, sending officials and port users to visit growers, packing plants, brokers, and other companies in and around the Gulf of Mexico ports of Veracruz and Altamira.

The effort, which included bringing Mexican freight forwarders and other business owners to Philadelphia, was designed to persuade Mexican shippers to consider sending their goods north by ship to Philadelphia, rather than by truck. Eventually, SeaLand concluded there was sufficient interest to start up the Atlantico service, which began sailing between the two Mexican ports and Philadelphia a year ago.

So far, the route has drawn solid business, port officials said. However, it has proved challenging to convince some shippers to switch from sending goods across the US border by truck, an effort made more difficult because of low gas prices.

“Our sweet spot is going to be north of Maryland out to Chicago and up into Canada,” O’Brien said. “Anything south of Virginia, and the truck rates start looking better.”

One difficulty is the relative inflexibility of moving cargo by ship compared with rail, which has implications for Mexican food suppliers who — in a relatively common occurrence — may not have sold their product before it leaves Mexico and are still trying to sell the product as it makes its way north.

“They can always sell it,” O’Brien said. “It’s where they are getting the best price. If they are in Kansas, they can call the trucker and say, ‘Head west; we have got a great price in Idaho.’ Or they can say, ‘Oh no, this guy bid more in Cleveland, so head east.'”