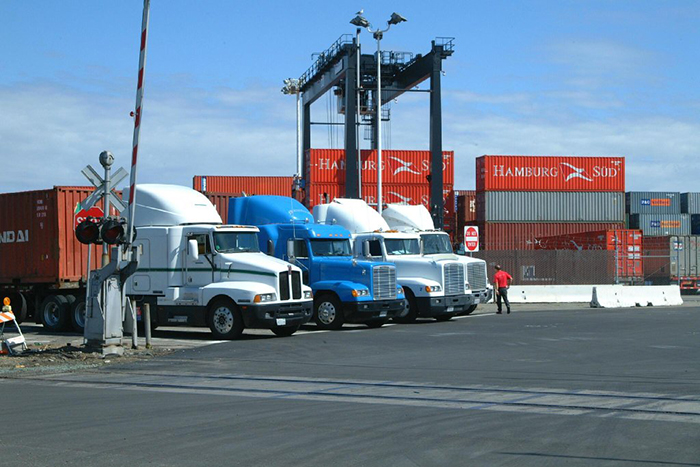 Truckers at the Port of Oakland, pictured, are still adapting to the port's new appointment system, a practice some observers say will eventually spread throughout the rest of the U.S. port sector.

Some truckers and beneficial cargo owners say conditions have improved, although others complain about rising demurrage costs owing to insufficient slots each day for making appointments.

Oakland International Container Terminal’s experience is a development that BCOs who ship through other seaports should follow closely because they will soon be grappling with the same problem.

Cargo volumes have increased to the point where the largest ports cannot handle their traffic in the traditional 40-hour work week. Terminals are responding by adding second shifts, but in order to manage traffic, terminal operators are pairing extended gates with controversial mandatory appointments to spread truck flow out evenly over 16 hours each day.

The problems in Oakland started this spring when the second-largest tenant, Outer Harbor Terminal, terminated its lease and declared bankruptcy. About 90 percent of its container volume migrated almost immediately to OICT. Ed DeNike, chief operating officer of SSA, which operates the terminal, said OICT now handles about 4,600 gate moves each daytime shift, and 1,200 trucks in the night shift. He said that is more truck traffic than any other terminal on the West Coast handles, including those in the much larger Los Angeles-Long Beach port complex.

For truckers calling at OICT, the challenge now is to secure an appointment window before the free time allowed for storing their imported containers on dock runs out. When free time expires, BCOs are charged storage fees, known as demurrage. “We’ve outlaid tens, if not hundreds of thousands in demurrage,” one BCO told JOC.com.

Karen Vellutini, vice president of sales and marketing at Northern California trucker Devine Intermodal, outlined a typical day for truckers under the new appointment system. Dispatchers at 6 a.m. on Mondays attempt to make appointments, but oftentimes find there are no slots — at least not daytime slots — available for two or three days. Owing to the difficulty in securing slots, truckers may be forced to take delivery of all of their containers the day before free time expires. By that time, so many containers must be retrieved that the company may not have enough drivers to complete the moves before demurrage kicks in.

The problem is compounded by the fact many truckers and warehouses don’t work at night. Furthermore, even though truckers may work for a few hours at night, they rarely work the entire eight-hour shift. Chris Lytle, executive director at the Port of Oakland, said that mentality has to change. “I’d like to see the night numbers rise. After 11 p.m., business really falls off,” he said.

Oakland today is where Los Angeles and Long Beach were during the past decade when terminals began to establish appointment systems. Some BCOs and their truckers at first refused to patronize night gates — even though the PierPass traffic mitigation fee is not charged at night — because they could not absorb the cost of staffing up for a second shift. Those BCOs still send their trucks to the harbor during the daytime shift and pay the PierPass traffic mitigation fee of $140.98 per 40-foot container. However, the fee incentivized other BCOs and truckers to work extended hours, and today, at least 50 percent of the truck moves in Los Angeles-Long Beach take place at night.

Under the pilot project in Oakland, which still has two months to go before it is reevaluated, all truck moves incur a $30 fee whether they move during the day or at night, so there is no incentive to book a reservation at night or disincentive to book one during the daytime shift. The West Coast waterfront contract calls for a second shift meal break from 11 p.m. to midnight, so many truckers that can not retrieve their loads by then will not book a reservation because the terminal is shut down for the lunch break, and that is at least one hour of dead time for them.

None of what is happening in Oakland comes as a surprise for truckers in Southern California. “We have a lot of the same issues here,” said Weston LaBar, executive director of the Harbor Trucking Association. Given the crush of cargo at the largest U.S. port complex, it often takes a day or two before truckers can secure a time slot. When they do, problems may arise because the terminal is congested and cannot deliver the container, or the trucker gets caught up in traffic and misses the appointment or the BCO customer has not paid the traffic mitigation fee.

On the other hand, after years of experience with appointments, both the terminals and the truckers are improving the systems. Seven of the 13 terminals in Los Angeles-Long Beach now have appointment systems, and several more will come on line this year. With each new attempt, the learning curve is less, LaBar said.

BCOs and truckers in Northern and Southern California are finding creative ways to make the system work for them, however. A large trucker in Oakland recently wrote SSA thanking the terminal for extending its gates and implementing new delivery options since spring. “The changes made at OICT have had a dramatic positive impact on wait time charged to our customers, improved driver productivity and make your terminal and the Port of Oakland a more desirable international gateway for all BCOs,” the trucking company executive wrote.

That trucker, like some in Southern California, are participating in a program known in Oakland as one-stop, and in Los Angeles-Long Beach as free flow, or peel-off. The trucking company makes an arrangement with its BCO customers and with the terminal to segregate its containers in a single stack when they have cleared Customs. The trucker then sends its drivers to the terminal, where they proceed to the stack and take delivery of the containers one after another without regard to the individual BCO that is the consignee, thereby creating a smooth, free flowing of truck traffic into and out of the terminal.

Lytle commended SSA for keeping OICT’s gates open 16 hours each weekday. Gate times are improving, he said. The port authority, through its port efficiency task force and trucker working groups, continues to meet regularly with stakeholders to identify and correct congestion problems. “We’ll get through this thing and fix it,” he said.

In Southern California, the HTA is meeting with individual terminals that are developing appointment systems to help the terminals devise better programs. LaBar said HTA and Yusen Terminals are collaborating on a project that uses information technology to project two or three days out after the vessel docks when each customer’s containers will be discharged from the ship and will be ready for pickup. “Anyone with appointments in Southern California is used to dealing with them, so it is more natural for them by now,” he said.