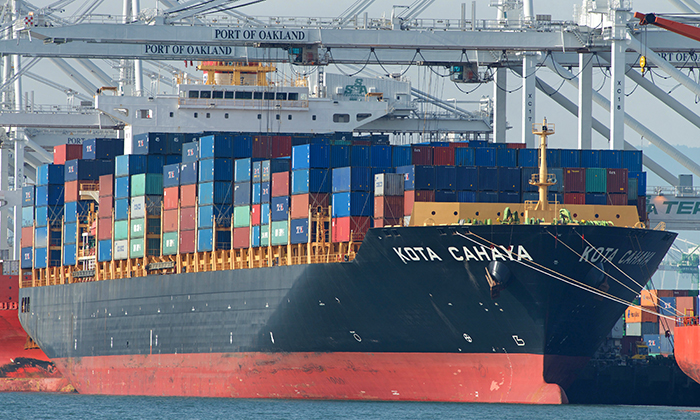 Import volume at the port of Oakland rose 2.4 percent in 2017. Photo credit: Shutterstock.

The Port of Oakland is urging truckers to apply for roughly $65 million in state funding to update their trucks to reduce dangerous emissions that threaten public health and contribute to climate change ahead of its release of an updated clean air plan later this year.

The deadline to apply for the grants from the state of California is Jan. 26. The funds available include $48 million for natural gas or electric trucks, $16 million from the Carl Moyer Memorial Air Quality Standards Attainment Program for everything from trucks to marine terminal cargo handling equipment, and up to $150,000 per unit in vouchers via the state’s Hybrid and Zero-Emission Truck and Bus Voucher Project.

The push comes as the port prepares an updated clean air plan that will guide the port’s emissions reduction efforts over the next decade. The first iteration of the plan cut diesel emissions 76 percent in the eight years since it was introduced, according to the port.

Oakland’s new clean air plan will come on the heels of the ports of Los Angeles and Long Beach updating their joint Clean Air Action Plan in November. The latest version of that plan will focus on pollution from cargo-handling equipment and harbor drayage trucks.

The ports are making an aggressive effort to curb emissions to ensure compliance with California regulations that mandate all industries in the state must reduce greenhouse gas emissions to 80 percent below 1990 levels by 2050.

All three ports are among the Top 10 US import container ports. The Los Angeles-Long Beach complex’s import traffic rose 5.1 percent year over year in 2017, according to PIERS, a sister product of JOC.com, and its 8.4 million import TEU was more than double that of No. 2 New York-New Jersey. Oakland was the No. 8 port in 2017, as import volume rose 2.4 percent to 876,955 TEU.

Global Shipping Outlook: A Sneak Peek at 2021
Port Performance North America: Managing Cargo Flow During a Pandemic — and Beyond
END_OF_DOCUMENT_TOKEN_TO_BE_REPLACED