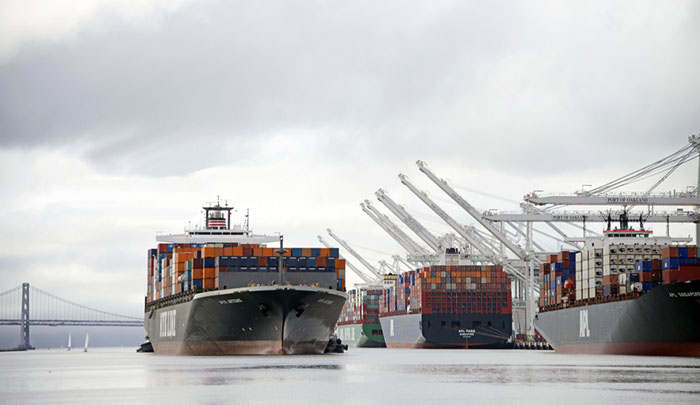 OAKLAND — When the Port of Oakland and SSA Marine teamed up this year to improve the logistics of moving refrigerated products to and from the Dreisbach cold-storage facility in the harbor, President Jason Dreisbach felt so confident in the future of the family-run, 63-year-old enterprise that he announced an expansion was in the works.

This is a lesson for port authorities that are looking to attract cold-storage capacity to their docks. Providing rail access to the cold-storage warehouse allows the operator to maintain the integrity of the cold or chilled products as they are transferred from rail cars to marine containers. Improving turn times for truckers that handle these high-value products further helps to attract refrigerated cargoes.

Dreisbach Enterprises handles mostly protein products such as beef, pork and poultry at its cold-storage facility at the Port of Oakland. Most of the product is frozen, although some chilled meats are shipped to Japan, Dreisbach said.

Over the past 15 years, the port did not implement any changes that would drive growth in the export of refrigerated products, but in 2016, the port expanded rail access and storage capacity at the site of the former Oakland Army base on port property, and the future of refrigerated exports suddenly looked brighter, Dreisbach said.

Product arrives at the Dreisbach facility on trains of up to 36 refrigerated box cars. The transfer of refrigerated meat from the rail cars to the facility and into marine containers takes place in a closed environment so the product has no chance to thaw during the move.

Having cold-storage capacity helps Dreisbach maximize its export potential. If the volume of meat products arriving by rail exceeds the shipment size booked for a vessel, excess product is safely stored in the cold-storage warehouse until the next vessel arrival, Dreisbach said.

Long truck queues have become common at ports, but they can be especially costly when high-value meat products are delayed. Terminal operator SSA Marine recently established night gates for refrigerated products and that is cutting down on wait times, allowing drivers to get more turns per day, Dreisbach said.

Dreisbach will build upon these advantages later this summer when the company breaks ground for a new facility on a 23-acre site in the harbor that will accommodate longer trains. Full build-out will take about one year. Dreisbach said he sees strong growth ahead, even though the current environment is challenging because of the strong U.S. dollar.

“There is no question that 2015 was a challenging year for red meat exports, with several economic headwinds taking a toll,” said Philip Seng, president and CEO of the export federation. However, production will increase in 2016, and exporters must “find innovative ways to differentiate U.S. products, win back market share and regain momentum for exports in 2016,” he said.