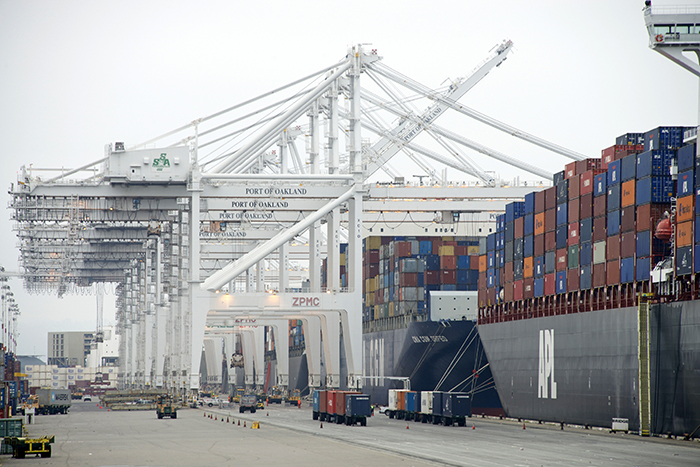 Oakland last year handled 2.55 million laden and empty TEU, an increase of 5.2 percent over 2017, which was one of the better growth rates on the West Coast in 2018. Total laden and empty container volumes in Los Angeles increased 1.24 percent year over year in 2018, while the Northwest Seaport Alliance of Seattle and Tacoma saw volume rise 3.9 percent, and Long Beach’s throughput increased 7.2 percent, according to port authority figures.

Although it is the seventh-largest US container port, Oakland, with three container terminals, does not face the logistical challenges of its neighbors to the south. The 12 terminals in Los Angeles-Long Beach, for example, handled 17.55 million TEU last year. The more than 40 weekly trans-Pacific services that call Oakland first visit Southern California, often discharging and reloading more than 10,000 containers per visit, before calling in Oakland to complete the remaining 15-20 percent of the vessel contents.

“Oakland has more inherent consistency,” Executive Director Chris Lytle told JOC.com. Call density — the number of container exchanges made per vessel visit — are increasing along with ship sizes, but Oakland’s total annual volume consistently increases about 3-4 percent, which makes planning equipment and labor requirements easier. And unlike in Los Angeles-Long Beach, where imports dominate, Oakland’s imports and exports are approximately in balance, so the port does not experience the sudden surges in empty container returns that contributed to terminal and warehouse congestion in Southern California last year.

From nine terminals to three

Port stakeholders credit Lytle and his management team for the improvements they have fostered through the port efficiency task force. Port staff has brought together carriers, terminal operators, truckers, railroads, non-vessel-operating common carriers, forwarders (NVOs), and equipment providers to address operational issues before they fester into major problems. “It really starts with leadership,” said Scott Taylor, president and CEO of GSC Logistics. “We believe that in Oakland, we have the most efficient and best communication between the port and its stakeholders on the coast.”

Taylor noted that since Lytle and his management team took over six years ago, Oakland pioneered the flat $30 per container fee that supports extended gates and prevents the truck bunching that occurred in Los Angeles-Long Beach when its traffic mitigation fee was charged only on containers moved during the day shift. As long truck lines outside the terminal gates dissipated, the wait fees that beneficial cargo owners (BCOs) were paying to truckers likewise went away. Lytle agreed, saying a large cargo consolidator told him it was “the best $30 he ever spent.”

Earlier in the decade, nine small terminals still competed for business in Oakland, complicating the operations of carriers, truckers, and equipment providers. A series of private sector consolidations cut that number to three larger, more efficient international terminals, with SSA Marine’s Oakland International Container Terminal controlling about 60 percent of the port’s volume and TraPac and EverPort splitting the rest.

It is much easier for logistics providers to allocate trucks and other assets to three facilities than to nine, Taylor said. Oakland, like Los Angeles-Long Beach, faces strict emissions-reduction guidelines in the coming years, which will contribute to increasing operational costs, although the possibility of a new baseball stadium being built at the Howard Terminal site poses a more serious threat to operational efficiency because of the vehicular traffic it will generate in the port area.

Logistics providers such as GSC also credit Oakland’s terminal operators for being nimble in implementing process improvements such as trucker appointment systems that help the terminals to manage truck flow, and container peel-off piles, also known as free flow, that reduce truck turn times. Andy Garcia, GSC Logistics chairman and executive vice president, said the terminals have been diligent in working the return of empty containers into their appointment systems. These measures help drivers, who are paid by the trip, to make better use of their limited hours of service. “When the port is fluid, it helps to attract more drivers,” Garcia said.

SSA, which operates OICT, uses free flow and container dray-offs not only to relieve gate pressures but also to increase throughput capacity on its existing terminal footprint, which is crucial for a facility that processes about 7,000 truck moves a day, said Jim Rice, general manager of SSA’s operation at OICT. The terminal is going a step further in expediting truck turn times by installing an auto in-gate operation at a second entrance, Rice said.

Keeping ahead of growth

With container volumes in Oakland increasing each year at a fairly predictable pace, terminal operators have been able to stay ahead of growth by ordering super post-Panamax cranes and yard equipment as they are needed. Rice said terminals would like to see increased use of night gates by BCOs and truckers, but as street and freeway traffic continues to grow, he expects that congestion will drive more trucks to the night gates.

Oakland will invest more than $800 million in the coming years on various infrastructure projects in the harbor area, including road/rail grade separation and overpass projects and the GoPort freight intelligent transportation system (FITS), said John Driscoll, director of maritime. The GoPort FITS project, which is being developed with Alameda County, will use data collection on transportation conditions within the harbor and on arteries feeding the port to better manage truck dispatching and traffic flows.

For GSC, the “next frontier” is to acquire its own chassis for its truck fleet, Garcia said. Although chassis providers have done a good job in ensuring sufficient equipment, GSC is expanding its chassis fleet to reduce the time it takes for drivers to complete transactions. Company-owned chassis will eliminate the need to stop at a chassis storage facility on the way to the terminals, he said. GSC has 500 chassis, and by the end of the year will have about 1,000.

Although there may be some resistance from BCOs whose all-in contracts with shipping lines include ocean transportation, drayage, and chassis usage, Garcia believes GSC can make the case that a drayage contract that includes chassis usage will result in a stable, predictable cost for ground transportation that in the end will work in favor of the BCO as well as the logistics provider.

Permalink Submitted by Bill@abtruck.com on May 3, 2019 10:10PM EDT
Shipping lines are causing problems with the efficient use of chassis, they have not fully gotten out of the chassis business. Shipping lines are mandating the use band of chassis to use for their equipment to the truckers, that type of control should be outlawed since the trucker/BCO are paying the chassis usage bill. For all the Shipping lines that are starting to charge fees for Street Turn of containers by the truckers, SHAME on you, this action will cause congestion and higher cost to the BCO's very soon since most street turns are done near the Port complex. The charging for street turn is counter to Port Efficiency and shows the greedines of those lines to make money by extorting the truckers and BCO's with non core business of moving containers. I'm a big supporter of the ONE Line street turn system that makes it simple to check and street turn containers efficiently with NO charge. BCO's should check the charges of shiplines on Per Diem, Demurrage and Street Turn. (Demurrage charged by the terminals are normaly small part of the demurrage charge, shiplines camouflage their charges as demurrage collected by MTO)
Port News›US Ports›Port of Oakland
Port News›US Ports›Port of Long Beach
Port News›US Ports›Port of Los Angeles
North America›United States