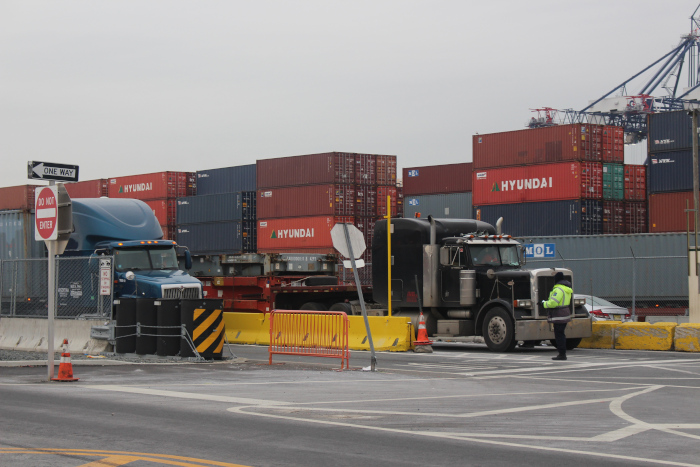 Trucks entering the gates of GCT Bayonne, which is preparing to expand the period in which truckers will need an appointment to enter the terminal's gates. Photo credit: Hugh R. Morley.

Despite fluidity gains achieved by the Port of New York and New Jersey’s only terminal gate appointment system, expanding that system could hamper trucker pickups and deliveries, the chairman of the largest drayage group in the port said.

Tom Heimgartner, chairman of the Association of Bi-State Motor Carriers, made the comments Monday at the group’s annual lunch as GCT Bayonne, which at present operates the only appointment system in the port, prepares to expand that window by three hours to essentially encompass the full business day.

In addition, two other terminals in the port — APM Terminals and Port Newark Container Terminals (PNCT) — are planning to launch appointment systems.

Heimgartner said the existing appointment system at GCT Bayonne, one of the four busiest marine terminals in the port, has succeeded because it is the only one in the port, and leaves three hours at the end of the day in which appointments are not needed.

Removing the non-appointment period would take away flexibility truckers need to meet their schedules later in the day if earlier appointments don’t go as expected for a number of reasons, including delays at other terminals, weather, and traffic, Heimgartner said. Sometimes the flexibility is needed to avoid demurrage, he said.

“Members are concerned that appointment systems at all terminals or for an entire day would make it impossible to schedule drivers to complete multiple moves in a day,” Heimgartner said at the lunch, which was attended by about 200 port executives and leaders, as well as Rebecca F. Dye, a commissioner of the Federal Maritime Commission.

GCT has said it expects to expand the appointment window in the coming months from 6 a.m. to 1 p.m. to 6 a.m. to 4 p.m. The terminal credits the existing partial appointment system with cutting turn times by 45 percent, to less than one hour. While truckers were initially skeptical of the system when it was introduced nearly three years ago, they now embrace it.

Port stakeholders consider appointment systems a key element to efforts to improve efficiency as cargo volumes rise and vessels get bigger, requiring terminals to unload and remove large volumes of containers quickly. The volume of loaded cargo moving through the Port of NY-NJ increased 5.1 percent in the first half of 2019, to 2.58 million loaded TEU, over the same period in 2018, according to PIERS, a sister product of JOC.com within IHS Markit.

Heimgartner said truckers are concerned over how the GCT system might interact with other appointment systems that may be introduced in the port. Truckers want to know that if a pickup or delivery takes longer than expected at one terminal then an appointment at a second terminal later in the day is adjusted accordingly, he said.

“Appointment systems need to be coordinated among terminals to deal with congestion,” Heimgartner said. “Congestion at one terminal can prevent a trucker from meeting commitments at another terminal, resulting in unnecessary missed appointments, delays, and possible demurrage charges.”

He said the expansion of appointment systems in the port is just one of the upcoming challenges — and opportunities — facing the port drayage community. Others include new rules in New Jersey that truckers believe threaten the owner-operator model under which about 85 percent of the port’s drivers operate, as well as coping with the driver shortage.

All of the terminals need to extend their gate opening hours to enable truckers to complete all necessary moves in a day, Heimgartner said. He called on ocean carriers to attend the group’s meetings to become better informed of trucker issues.