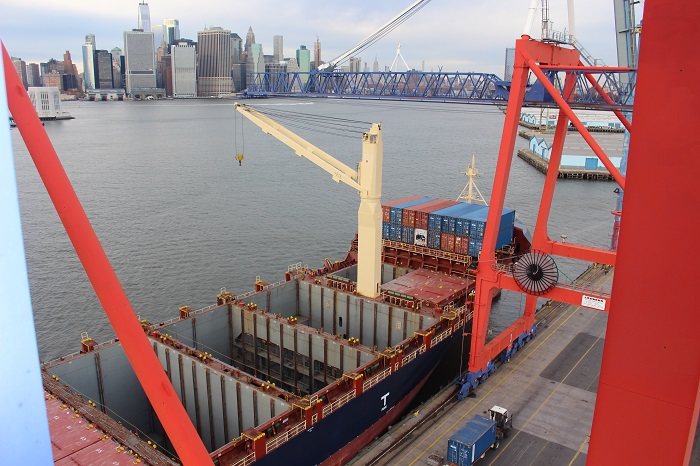 At the center of New York and New Jersey’s push to boost container-on-barge use, Red Hook Terminals is looking to position itself as the hub of a low-cost, efficient regional barge service that can replace trucked containers, especially in and out of the vast New York consumer market.

The port’s smallest terminal — with cargo growth that outstripped the port as a whole last year but lags it slightly this year, according to Red Hook Terminals — believes barges can help alleviate the expected pressure on the port’s four main, New Jersey-based terminals and area highways, as port cargo volumes and area congestion increase.

Authorities say trucks carry about 90 percent of the cargo entering or leaving New York City, and the port’s annual cargo volume is expected to increase by more than 50 percent by 2026. And while the New Jersey terminals are about 10 miles outside the city, Red Hook is the only terminal at its center — a location from which some shippers, among them Heineken, are already reaping the benefits.

“When you start looking at the future of the port and the future of the region, congestion is going to be a major disruptor to economic growth if there is not another way of bringing goods in and out of the city other than truck,” said Michael T. Stamatis, president and CEO of Red Hook Terminals, which operates that Brooklyn terminal. Stamatis this month signed a five-year lease on the terminal, with an option to extend it by five years.

The barge — the truck congestion reducer

More use of barges, he said, “has to happen because it's just not sustainable to move 90 percent of the goods into the city by truck.”

While the concept has been discussed, and pursued, for years, its progress has been slow. Barges carried only a tiny proportion — measured in the tens of thousands — of the 4.8 million loaded TEU handled by the port in 2017.

Yet the creation last month of a coalition of port stakeholders by the Port Authority of New York and New Jersey and New York City government officials to explore and promote barge use — known as the North Atlantic Marine Highway Alliance — has put new scrutiny on the strategy. So too did the announcement in July by New York City officials that barges would play a key part in a $100 million plan to reduce truck traffic by pursuing other ways to move freight in and out of the city.

Stamatis said a barge carrying several hundred containers could be moved in less than a day from discharge at a New Jersey terminal to Red Hook, with actual travel time on the water of about two hours. That would cost about $2,500 to $3,000, for a barge that could hold 400 containers — less than $10 each — with a truck fee on top to move each container to its destination in New York, Stamatis said.

By comparison, moving a container by truck from the Port of New York and New Jersey to Sunset Park, Brooklyn, would cost about $750 to $800, with the trip taking between one hour and two and a half hours, depending on the traffic, said Tom Adamski, agent for First Coast Logistics. He estimated that trucking the container from Red Hook to Sunset Park could cost $250 to $400.

The 80-acre Red Hook terminal, with a 5,500-foot berth and a 42-foot depth, currently takes vessels of up to 4,000 TEU, but could take larger ships, Stamatis said. The terminal, with an annual capacity of 200,000 TEU, handled 110,000 TEU in 2017, a 9 percent increase over 2016, and is on track for a 3 to 5 percent increase this year, Stamatis said. The terminal is host to two services, a CMA CGM world service that calls in Europe, Australia, and New Zealand; and a Seaboard Marine service that calls on South America, the Caribbean, and Central America trade.

In 2016, Red Hook began putting together a cross harbor barge service linking its terminal with Port Newark Container Terminal (PNCT) in New Jersey, although the service has not yet started. The most efficient operation would be if all the New Jersey terminals participated, each segregating cargo destined for the barge, so that the vessel could do a “round robin” to each terminal before heading for Brooklyn, he said.

The terminal also operates a service from Brooklyn to another terminal operated by Red Hook on the New Jersey side of the port, which carried 27,000 containers last year, mostly in a 400-TEU barge, including cargo imported through Brooklyn and barged to Newark. The project is supported by a $1.6 million “marine highway” grant.

In May, Stamatis signed a 36-year lease to operate the 65-acre South Brooklyn Marine Terminal (SBMT), located about a mile and a half from Red Hook. With a depth of 35 feet, it handles mainly breakbulk.

Stamatis wants to operate both terminals, but that will depend on New York City and the port authority. New York Governor Andrew Cuomo earlier this year called for the Red Hook terminal to be moved to the SBMT site. Stamatis said the decision may rest on the port authority’s master plan, to be released next year, which will assess the future challenges and needs of the port for the next 30 years. Red Hook’s lease on the Brooklyn terminal allows the authority to terminate the deal with two years notice.

The port authority expects New York-New Jersey to handle about 12 million loaded and unloaded TEU by 2036, and about 2 million of the discretionary cargo that goes by rail. The port handled 3.8 million loaded TEU through January this year, a 6.5 percent increase over the same period in 2017, about 70 percent of which were imports. Currently, only about 15 percent of the port’s cargo goes by rail, with most of the remainder going by truck, and the authority believes more use of barge would help reduce the emphasis on trucks.

The first meeting of the North Atlantic Marine Highway Alliance attracted representatives from ports in Portland, Maine, Rhode Island, Boston, and Philadelphia, as well as representatives of tug and logistics providers, Stamatis said. One option under discussion, he said, is the possible use of a roll-on, roll-off barge, which trucks carrying containers would drive on and drive off at the other end, he said.

The cross-harbor route, however, is just part of Red Hook’s effort to attract more cargo. Stamatis said he is in discussion with the Port of Wilmington, Delaware, about the possibility of moving bananas imported through the port by barge to Brooklyn. Longer trips that move cargo within the US became more attractive when the electronic logging device (ELD) mandate, which took effect in December, limited driver hours, Stamatis said. And any rise in diesel costs could also make barge service more competitive with longer truck trips, he said.

Some global shippers already see the benefits of sending cargo into the center of the consumer market, Stamatis said. He cited the example of Heineken, which ships its beer from Holland on the CMA CGM line to a warehouse the beer company operates inside the Red Hook terminal. “These trucks get loaded every night to distribute to the five boroughs” of New York, he said.

“We're trying to convince multinationals and importers that, hey, it's better to have your containers brought directly into the market where they're going to be distributed and sold,” Stamatis said.