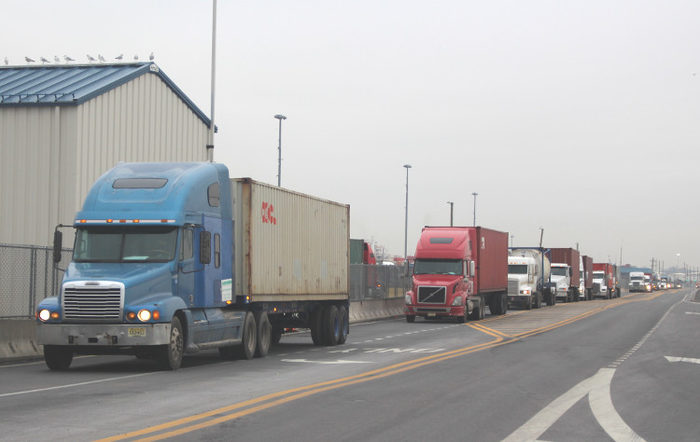 The dashboard is a step toward granting port stakeholders greater access to container information portwide, as ports, logistics providers, and shippers across the nation increasingly focus on the importance of visibility. (Above: Trucks line up outside the Port of New York and New Jersey.) Photo credit: Hugh R. Morley.

A new information dashboard designed to improve fluidity at the Port of New York and New Jersey offers shippers and truckers easier access to container information and enables them to make multiple reservations in the GCT Bayonne appointment system.

The dashboard, which went online Monday, is an upgraded and streamlined version of port’s four-year-old PortTruckPass website that was created by a consortium of the operators of the six terminals in the port to collect and disseminate logistical information.

The site at present maintains a truck registry, monitors the movement of trucks through the port using radio frequency identification (RFID) tags, and enables port users to track containers and find their location in the port and to determine whether they are available for pickup. Since GCT Bayonne launched a system in December 2016 through which truckers make pick-up and drop-off appointments, users have been able to place appointments through PortTruckPass.

The new site, with superior software, will do the same, but in a more streamlined way, said Beth Rooney, assistant director of the port division of the Port Authority of New York and New Jersey.

“It’s a more user-friendly and more intuitive way to conduct these transactions,” Rooney said, adding that the greater sophistication will be used to expand the site’s capabilities as well. “This is simply the next upgrade, preparing us for more functionality in the future to support communication, transparency, efficiency, and advanced planning,” she said.

The dashboard offers a step toward granting Port of New York and New Jersey stakeholders greater access to container information portwide, as ports, logistics providers, and shippers across the nation are increasingly focusing on the importance of visibility in the supply chain, and having the ability to track containers as they move along it.

The most ambitious such project is the effort by the Port of Los Angeles partnership with GE Transportation — now including the Port of Long Beach — to create an information portal known as the Port Optimizer. The project seeks to allow stakeholders to track containers from arrival at the port to departure, enabling drivers to respond in real time to traffic and port congestion while allowing terminal operators to predict and manage truck flow. New York-New Jersey officials, however, say much of that capability is already available in the PortTruckPass system, even under the old version.

The additional features in the new version of the PortTruckPass system include enabling users to make multiple appointments at the same time instead of having to flip through different screens for each one, Rooney said. A mobile application will soon enable easier appointment bookings instead of the clumsier method of going through a website on the phone, she said.

When a driver makes an appointment, the new version of PortTruckPass will also collect information on whether each container to be picked up needs a chassis from an intermodal equipment provider (IEP), Rooney said. If so, that information is provided to IEPs to help them ensure sufficient chassis are available.

Asian container shortage set to intensify into May