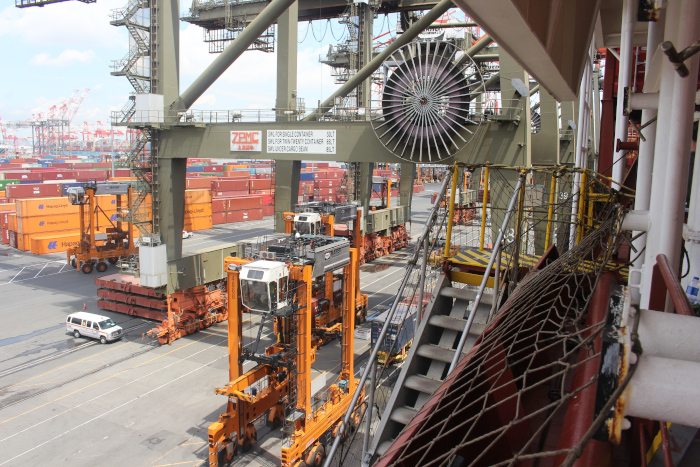 The organization representing ocean carriers and marine terminals in the Port of New York and New Jersey has backed a lawsuit to reduce the influence of the Waterfront Commission of the New York Harbor. Photo credit: Hugh R. Morley.

The New York Shipping Association (NYSA), members of which include ocean carriers and terminal operators, is backing a plan to withdraw the ports of New Jersey from the Waterfront Commission of New York Harbor.

New Jersey Gov. Phil Murphy and the state legislature are seeking to overturn a federal judge’s May 30 dismissal of a state law enacted in January 2018. The law, if allowed to stand, would require the New Jersey State Police to conduct criminal investigations, background checks, and other oversight on the New Jersey side of the port, rather than the Waterfront Commission, as is presently the case.

Although the NYSA is not a party to the suit, the association said in a brief filed with the US Court of Appeals for the Third Circuit that the Waterfront Commission’s work is “more burdensome and inefficient than necessary,” and delays the hiring of new longshore workers, creating a lack of reliability in cargo removal at the port that could cause shippers to use other ports.

Proponents of reducing the agency’s role — which include the International Longshore Association (ILA), New Jersey Retail Merchants Association, and Maritime Association of the Port of New York and New Jersey — accuse it of overstepping its authority to combat crime on the docks and say the Waterfront Commission’s effort to oversee hiring in the port causes delays and disruption. For its part, the Waterfront Commission — an independent, bi-state agency with two commissioners, one each appointed by New York and New Jersey — says its work is necessary, and it is merely carrying out its responsibility to fight racketeering that can increase costs in the port, and ensure fair hiring, in part by promoting diversity.

In its Sept. 26 brief, NYSA said its members have “experienced and continue to experience the negative consequences of the commission’s” role in the port.

“For the commission’s first fifty years, it generally adhered to its limited role in vetting candidates for the longshoremen’s register and performing its other authorized functions,” the association said. “In the recent past, however, it has assumed a more intrusive posture into port hiring.” That includes “needlessly delaying hiring,” which has caused economic harm to businesses in the port, according to the brief.

The Waterfront Commission, however, argued in a reply amicus curiae brief filed Oct. 4 that the NYSA’s arguments are “erroneous, irrelevant, and immaterial,” among them the “false” claim that the commission had held up the hiring of new longshore workers in 2013. The delay was actually due to a lawsuit filed by NYSA at that time, the brief argued.

The dispute reflects the shift in commerce in the port, most of which in the past was handled on the New York side of the port. But now, the four largest of New York-New Jersey’s six main terminals are located in New Jersey and account for approximately 90 percent of all containerized cargo through the port, Port Authority of New York and New Jersey figures show.

The Waterfront Commission was created by a 1953 compact, which was approved by Congress and signed by former president Dwight D. Eisenhower. The commission has consistently argued that it could not be dismantled without the consent of either both states or Congress, and while the New Jersey legislature has in the past approved bills to do that, the New York legislature has not.

Despite the current legal battle, the Waterfront Commission is currently overseeing the hiring of 650 longshore workers and checkers at the port, the largest group of new hires since 2014, which will increase the registry of 3,500 longshore workers by about 8 percent.

Global Shipping Outlook: A Sneak Peek at 2021
Port Performance North America: Managing Cargo Flow During a Pandemic — and Beyond
END_OF_DOCUMENT_TOKEN_TO_BE_REPLACED