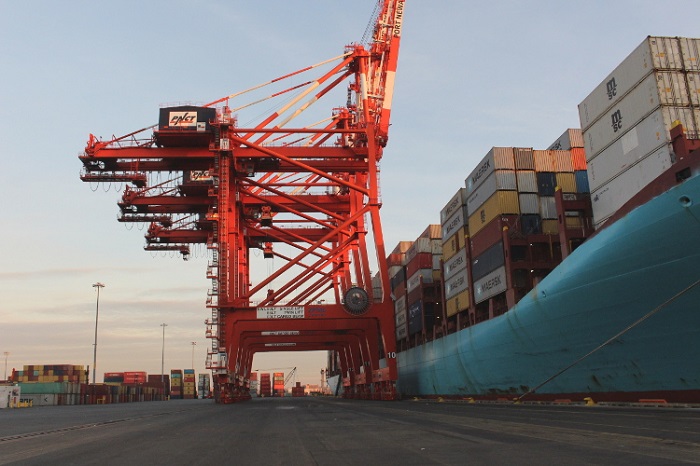 Port Newark Container Terminal (PNCT), one of the four main marine terminals at the Port of New York and New Jersey, has quietly introduced an innovative pilot reservation program that allows customers to pay a $95.50 per container fee to secure one of the first 50 slots of each day.

The “Flex” program at PNCT comes as the East Coast’s third-largest port seeks ways to reduce congestion and turn times at marine terminals in the expectation that the port will see more cargo in shorter, intense bursts as a result of increasingly frequent mega-vessel calls.

The PNCT system, introduced this week, is the first of its kind at the port, and the head of the West Coast’s Harbor Trucking Association (HTA) said he had not seen exactly such an initiative before at other ports. The terminal was not available to comment on the initiative beyond an explanation on its website.

Some truckers consider the first slots of the day prime positions as it enables them to pick up or deliver cargo and move on with the day’s work. Truck lines at port terminals, as elsewhere, have tended to be long as the 6 a.m. gate opening time approaches, swelled by truckers seeking to get into the terminal early.

The initiative comes in the wake of the successful introduction of an appointment system 14 months ago at the port New York-New Jersey’s Global Container Terminals Bayonne terminal, in which trucks must make an appointment in advance to enter the terminal in the first seven hours of the day.

Bayonne says the system produces a turn time that is 45 percent lower than in the non-appointment period. Two other terminals, APM Terminals in Elizabeth and PNCT are expected to implement an appointment system when they complete terminal upgrades, perhaps this year.

The Flex program appears to be part an appointment system and, on a small scale, somewhat similar to the Pier-Pass system at the Ports of Los Angeles and Long Beach, in which customers pay more — $144.18 per FEU — to pick up containers during the day, rather than in off-peak hours.

The PNCT program also could potentially test the much-discussed topic of whether beneficial cargo owners (BCOs) would be willing to pay more for more certainty and better service in their supply chain.

PNCT, outlining the program on its website, said the “priority early bird” program enables truckers that pay the $95.50 to become one of the “first set of trucks serviced.”

“Our goal is to help you handle unpredictable or changing requirements from your customers, save you money and/or time, and give you the choice whether or not the “FLEX Services” program can help solve these issues for you,” the terminal operator said.

A second, soon-to-be-implemented program, “PNCT Late Reefer,” will enable a trucker to pay $80 so that they can pick up or deliver a refrigerated box after the terminal’s 4:30 p.m. cut off time.

The two initiatives are part of a “completely voluntary program” that is open to all truckers who can make payments and secure a slot through a smartphone or computer, the outline said.

For BCOs, the programs “can help you meet dynamic timeframe or appointment needs for your supply chain,” and allows truckers to deliver for the BCO a “personalized and specific outcome,” the outline says.

Beth Rooney, assistant director at the port authority's ports department, said she knew only a few details of the program, but echoed the assessment that it is part an appointment system and part a pay-for-priority system.

“We knew that all terminals do this on an ad hoc basis with select shippers today,” she said. “So this is a formalization of that arrangement.”

Jeffrey A. Bader, president of the Association of Bi-State Motor carriers, said he was not clear on the details of the program. “We get up early to get ahead of the crowd,” he said, but added that the terminal had released too little information for him to understand what benefits someone would get from paying the fee.

Weston LaBar, executive director of the HTA, which represents the port trucking industry in Southern California, said the West Coast has not seen anything exactly the same as PNCT’s program, but several somewhat similar strategies enable terminal users to get customized service offered on an ad hoc basis, he said.

In one, a trucker that has an especially large volume of containers coming in on a particular weekend can pay $25 to $30 per container to the terminal so that it opens a special weekend gate, with the income paying for the terminal’s additional labor and equipment costs, LaBar said.

Elsewhere, some terminals that have regular appointment systems will give truckers priority appointments based on performance, he said. In that case, truckers that consistently keep a high percentage of their appointments in the appointment system get priority in choosing appointment slots. In another example, some terminals create special peel-off piles for a high-volume trucker — in which a separate pile is created containing only the boxes from one BCO or trucker — who is charged $25 per container to pay for a stevedore dedicated solely to the pile, LaBar said.