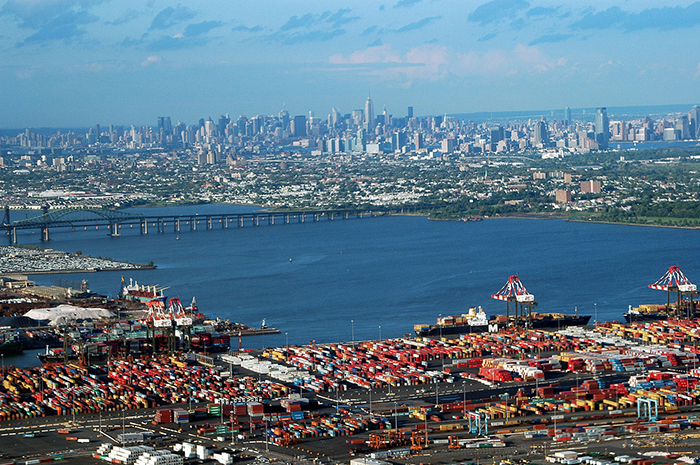 Mention the Waterfront Commission of New York Harbor to International Longshoremen’s Association officials or port employers, and they're likely to react with a grimace, a groan or a pier-style expletive.

For the last several years the commission has played a unique and omnipresent role at the Port of New York and New Jersey. The anti-crime watchdog has clashed repeatedly with the ILA and the New York Shipping Association in legislative, regulatory and court venues over hiring and other issues.

Commission-industry bickering has complicated the hiring of dockworkers needed to ease labor shortages at the East Coast’s largest port. ILA anger at the commission was blamed for a still-unexplained wildcat strike that idled the port last Jan. 29. NYSA President Harold Daggett has denounced the commission as an “evil empire” and called for its abolition.

The public disagreements have been muted lately but are almost certain to flare up again, given the commission’s and industry’s diametrically contrasting views on the port and its labor-management relations.

Commission officials say organized crime remains a presence on the docks, and that the only permanent remedy is to break up entrenched hiring practices, reduce the ILA’s traditional role in job referrals and broaden the workforce to include more minorities and women.

NYSA and ILA officials say allegations of mob influence are outdated and overblown, that the port-wide longshore workforce already is diverse, and that the commission should stick to law enforcement and allow the industry to manage hiring under its negotiated contracts.

This debate is unique to New York-New Jersey. No other port has anything like the Waterfront Commission, a bistate law enforcement agency created in 1953 to crack down on pervasive racketeering dramatized in the movie 'On The Waterfront.'

The commission vets and licenses dockworkers and port businesses, regulates the size of the longshore workforce, and conducts criminal investigations. Its $12 million annual budget comes from a 2 percent fee on revenues of the companies it regulates.

In recent years the commission and industry have butted heads repeatedly over hiring and seniority practices established in NYSA-ILA local labor contracts, particularly the six-year deal signed in 2013.

The current contract earmarks 51 percent of new jobs for military veterans, with the rest divided between ILA and NYSA referrals. Previously, the ILA had for decades referred almost all candidates, including many friends and relatives of current members.

Friction arose when the commission began closely vetting candidates to ensure that ILA-referred candidates weren’t filling slots designated for veterans or NYSA referrals, that ILA referrals weren't being hired first in order to maximize their seniority, and that new hires were diverse.

The union and employers resented the close oversight, which they described as micromanagement, and accused the commission of overstepping its authority. The commission said its actions were supported by its mandate to ensure fair hiring and nondiscriminatory hiring.

Disagreements delayed the start of hiring for five months. The ILA, NYSA and the Metropolitan Maine Maintenance Contractors Association unsuccessfully sued the commission, claiming illegal interference in their collective bargaining agreements. Both sides are awaiting a federal appeals court ruling.

More recently, the ILA and its employers have launched a new effort to pass legislation, vetoed last year by New Jersey Gov. Chris Christie, Republican, to remove New Jersey from the commission and to transfer the agency’s duties to the state police. Commission officials say the bill would be unconstitutional.

While pushing to reduce the ILA’s role in hiring, the commission has criticized the union’s record on diversity. Newark Mayor Ras Baraka last week led a demonstration at the port to press demands that the union hire more of his predominantly black city’s residents for port jobs.

As with other issues, the commission and industry interpret the hiring statistics differently.

The overall percentage of minority dockworkers in the port is close to that of the New York metropolitan area. The NYSA says that in 2011, 25 percent were African-American, 13 percent were Hispanic and 11 percent were female, and that these percentages have risen with subsequent hires.

However, Baraka and the Waterfront Commission note that two of the port’s largest ILA locals, representing checkers and mechanics, have few blacks. “The 112 highest-paid dockworkers in the port are white males,” said Walter Arsenault, the commission’s executive director.

ILA and NYSA officials say this is because of seniority. “We’re doing what we can, but we can’t just get rid of the people who are already here merely because of the way they look,” said NYSA President John Nardi.

He said many early hires were ILA referrals because for decades, all referrals had been from the union and that it took time to get veterans and NYSA referrals into the pipeline of job candidates.

Nearly 1,000 new workers have been hired, including replacements for retirees. NYSA companies employ about 3,500 people. More than 1,000 mechanics are employed under a separate contract by members of the MMMCA.

Once the hiring program got into full swing, the percentages of veterans, ILA and NYSA referrals were in line with the contract’s formula, Nardi said. He likened the changes in the workforce’s composition to turning a ship. “It takes time,” he said. “We can’t do everything in one shot, but over time, it’s going to happen.”

The current NYSA-ILA contract also calls for “relief gangs,” a second shift that would replace the port’s unique “continuous operation” system, in which the same work gangs stay with a ship until it is finished. The current system requires overstaffing to cover workers during paid breaks. In addition to driving up overtime costs, the commission says this has created opportunities for no-show and low-show jobs for favored dockworkers.

The start of relief gangs has been put on hold until additional workers can be hired. Nardi said he would like for the relief gangs to begin operation later this year or in early 2017, but that details have yet to be worked out.

The port’s continuous-operation system was addressed in commission hearings in 2010 that highlighted side deals allowing a “privileged few” ILA shop stewards and timekeepers to stay on the clock as much as 27 hours in a 24-hour day and collect more than $400,000 a year.

At the hearings, Daggett defended the workers’ pay, telling the commission, “I wish all the members earned more than $400,000. These guys work their asses off out there.”

In the last negotiations, the ILA-NYSA contract was revised to permit terminal operators to convert workers on round-the-clock hourly pay to salaries, and to replace them with lower-paid workers when they leave the workforce. Some ILA workers who previously were on 24/7 pay now collect more than $500,000 a year, Arsenault said.

The Waterfront Commission’s hearings in 2010 were a coming-out event for the agency’s current leaders, who took office after the commission underwent a housecleaning to correct problems cited in a scathing New York State inspector general’s report in 2009.

For years the commission was a favored roost for political patronage appointees, and a sleepy operation that let its licensing duties slide. That changed with the appointment of Ronald Goldstock, former head of the New York Organized Crime Strike Force, as the bistate agency’s New York commissioner, and Arsenault, a former chief homicide prosecutor in Manhattan, as executive director.

After the hearings, Goldstock predicted the agency’s prodding would make the port “unrecognizable” in five years. “It will be far more competitive,” he told JOC.com at the time. “Organized crime will lose its grip. Workers will be treated better. Companies and consumers will no longer have to pay a racketeering tax.”

In a recent interview, Arsenault cited a string of guilty pleas and convictions of ILA officials and members including a dozen for a 35-year “Christmas tribute” racket that funneled millions of dollars in annual payoffs to the Genovese crime family.

He also pointed to the reduction in the ILA’s influence over hiring. In addition to the changes in job-referral and work practices, which the commission says resulted from its prodding but the NYSA and ILA say were their idea, union members no longer represent employers as hiring agents who issue work assignments.

“We’ve made tremendous strides, but we have a lot more to do,” Arsenault said. He acknowledged that the commission’s actions haven’t been universally popular, but he said the agency will continue to press for reforms.

“The ILA wants things to return to what they were like in the old days,” he said. “That’s not going to happen.”

And you write that shippers