NY-NJ under pressure to revive ban on older truck engines

NY-NJ under pressure to revive ban on older truck engines 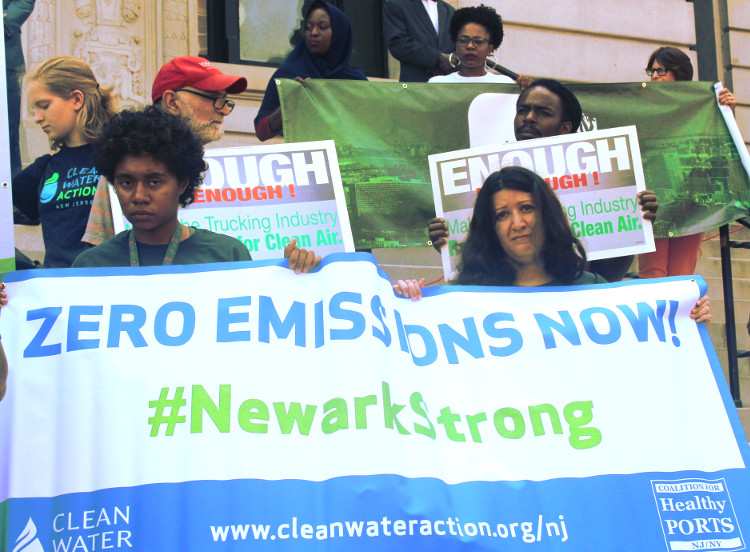 Coalition members at a protest last July asking authorities at the Port of New York and New Jersey to reduce emissions.

A coalition of environmental, labor, faith, and community groups is calling on the Port of New York and New Jersey to revive a plan to ban all trucks with engines from 2007 or older from the port, saying the abandonment of the plan 18 months ago endangers the health of locals.

In a 47-page report released Tuesday, The Coalition for Healthy Ports said older, dirtier trucks allowed under a revised plan instituted by the Port Authority of New York and New Jersey when it abandoned the earlier proposal would “produce ten times more deadly fine particulate matter” than under the original plan.

The coalition released the report to coincide with a meeting held by the port authority in Jersey City, New Jersey, to secure input from port stakeholders for the drafting of a masterplan to guide development of the port’s 3,000-plus acres of cargo related property during the next 25 to 30 years. Coalition members were invited to the meeting, and gave comments on environmental issues.

In response to the coalition’s demand, the port authority released a statement that did not say whether or not it would revive the abandoned program.

“We are proud of our environmental investments and initiatives — including hundreds of millions spent on the port’s rail system, buying cleaner burning trucks, a clean vessel incentive program and environmentally friendly yard handling equipment — which led to a 41 percent reduction in port pollutants since 2006,” the statement said.

The authority, saying it had “worked cooperatively” with the coalition for two years, added that it had not had a chance to review the plan, which was given to the authority only as the hearing started. The authority said it would “continue to work with all port stakeholders to take a holistic look at this important issue and to craft regulations, standards and programs in which the entire region plays a role in implementing.”

The plan abandoned by the authority would have banned 6,100 trucks, or 70 percent of the total serving on Jan. 1, 2017. However, the authority stepped away from the plan in January 2016 amid opposition from motor carriers who warned that the deadline was impossible to meet and the ban would cripple the East Coast’s largest port, where about 85 percent of containers are moved by truck.

The authority replaced that plan with what the authority called a “goal-based program” that relied in part on providing incentives to encourage truckers to trade in older trucks. The program prohibited trucks with 1994 or 1995 model engines from entering the port after Jan. 1, 2018 and increased the funding for an existing program program that gives truckers up to $25,000 to buy a vehicle with a 2007-or-newer engine if they replace one with a 1994 or 1995 engine.

Amy Goldsmith, chair of the coalition, in a statement released with the report, said it was “unconscionable” that the authority had “abandoned (its) promise to protect communities and workers who bear the burden of diesel pollution everyday with their lives and health.”

She said the study showed it would take 15 years to clean up port truck emissions under the new program, but the one abandoned by the authority would “would have achieved a 90% reduction” in emissions. It did not specify what time period that would occur in.

“These differences in the fleet’s age profile are critical because heavy duty trucks with a model year of 2007 or newer are subject to emissions standards that are far more stringent than those that applied to their older counterparts,” the report said.

“In other words, 2007 and newer trucks have 90% fewer emissions than their pre-2007 counterparts,” the report said. “As a result, the scaled back scope of the revised program will result in greater truck emissions when compared to emissions that would occur under the original program due to the continued use of older trucks at port facilities.”