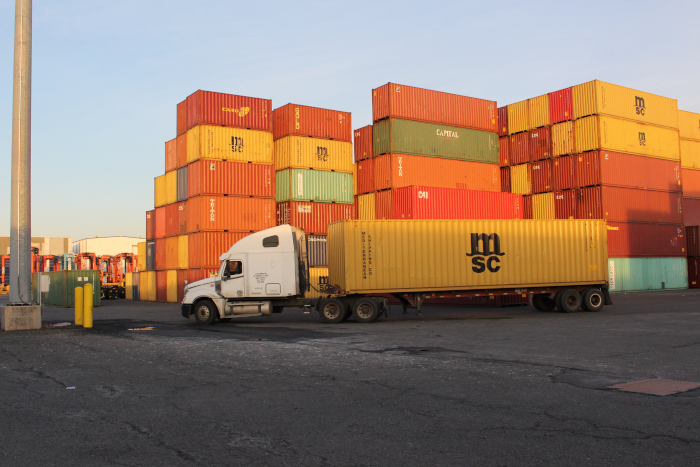 Truckers in the Port of New York and New Jersey would be able to more easily track containers under an upgrade to the port portal being tested. Photo credit: Hugh R. Morley.

Port of New York and New Jersey terminal operators are launching a pilot program to help users of the port’s four-year-old information portal better track cargo by allowing truckers and shippers to integrate portal data into their own cargo management systems.

Under the pilot program that is expected to begin in March, the trucker and shipper participating in the test will no longer have to log onto the port’s web portal, Terminal Information Portal System (TIPS), to “pull” container tracking data. Instead, that data will be “pushed” into their own software system. The change will make it easier for the participants to manage, analyze, and focus the data for their own needs, according to Sustainable Terminal Services, Inc. (STS), the nonprofit corporation created by all of the six container terminal operators in the port that run the system.

The program could potentially lead the way to what STS officials say is the most significant advance in the TIPS portal since it was introduced in the fall of 2015. The system was one of the first such digital portal systems developed by a North American port. The terminal operators, which make up the STS board and provide the information for the portal, believe that the latest initiative could integrate the system more tightly into stakeholder supply chains.

The pilot program comes at a time when more ports around North America are jumping on the portal bandwagon to harness digital technology to create information portals that give stakeholders greater visibility to cargo moving through the supply chain.

At present, TIPS users log into a specific website to see information such as when an import container arrives in the terminal, whether it has any holds on it from Customs, when it is released by Customs or the ocean carrier, and when it actually leaves the terminal, STS officials said. The portal also enables stakeholders to see how many “free” days an import container has left before detention fees kick in, and for a booking of multiple empty export containers, how many have been picked up and sent to be filled with cargo vs. how many from that booking remain in the terminal.

“If a trucker wants to do something he has to go to TIPS, look at a list of containers, check the availability of those containers, make appointments, and then go back to its dispatch system,” to organize their pick up or delivery, said Michael DiVirgilio of Michael J. DiVirgilio & Associates LLC, a consultant on cargo transportation and supply chain issues to STS.

Under the pilot, participants won’t need to go to the TIPS website, but can analyze the data in their own system, he said. Truckers, for example, could integrate the data into their dispatch system and track what boxes have to be picked up and when by setting up alerts, he said. Shippers likewise would have the benefit of enhanced transparency in cargo movement and could more easily track containers within their own software, he said.

At the conclusion of the pilot program, the length of which has yet to be defined, STS will analyze the ease of providing the information to stakeholders and how useful the information is to the recipient. STS will then determine whether the pilot should be expanded to a broader range of participants, DiVirgilio said.

New York-New Jersey and other ports across the United States are responding to the desire from shippers and port stakeholders for ways to more closely track their cargo, and to improve fluidity and efficiency in moving containers in and out of the marine terminals.

The Port of Los Angeles, for example, in 2016 began developing the cloud-based information portal that is now known as the Port Optimizer. The portal, a joint venture with GE Transportation, now gathers data from more than 70 sources, including all six terminals in Los Angeles and three in Long Beach, as well as container carriers and some federal agencies, such as Customs and Border Protection, allowing cargo owners to predict when their containers will be ready for pickup as much as 14 days before vessel arrival.

The Port of Oakland in 2018 began developing a date that now includes truck turn times and vessel schedules, and is looking into information portal options to provide real-time information on container status, vessel arrivals, and terminal operating conditions. Stakeholders say much of this data is available, but not in one place.

In New York-New Jersey, truckers have used the TIPS system to make reservations to pick up or drop off containers at the GCT Bayonne terminal since it became the first terminal in the port to launch an appointment system in 2016.

STS said it is also exploring ways that TIPS may be utilized to provide information to shippers about chassis availability and to intermodal equipment providers (IEPs) about upcoming demand for chassis, so that they can ensure there is a strong supply of equipment. In addition, STS is studying how its portal may be used to facilitate rail efficiency.