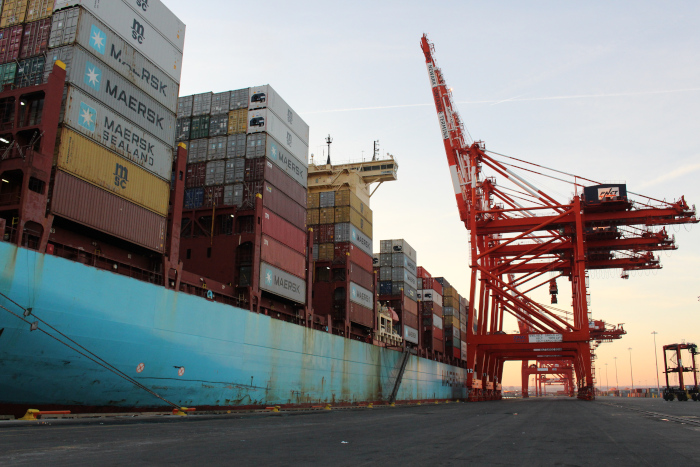 Next month, terminals at the Port of New York and New Jersey will change the way they hire weekend workers to help them more accurately hire according to their needs. Photo credit: Hugh R. Morley.

A program aimed at boosting efficiency in how weekend labor is assigned at the Port of New York and New Jersey will begin in September after a delayed kickoff due to labor shortages over the summer.

As the New York Shipping Association (NYSA) seeks to hire 650 new workers — about a third of which have been hired or are ready to be hired — the weekend program is one way in which the port is looking to improve the efficiency of the existing workforce of about 3,500 longshore workers.

Another way under consideration by the association and the International Longshoremen’s Association (ILA) is reducing absenteeism, an acknowledgment that there is a section of the workforce — about 10 percent — that at times does not report for an assigned shift.

The need for new workers is driven primarily by longshore worker retirements and rising cargo volumes. Loaded cargo through port terminals increased 5.1 percent to 2.57 million TEU in the first half of 2019 over the same period last year, according to data from PIERS, a JOC.com sister company within IHS Markit. Cargo volumes through the port increased 6.6 percent in 2018 over the year before, the figures show.

The weekend hiring program was part of the contract approved by the ILA  in September 2018 but has yet to be implemented. The initial start date of June was postponed in anticipation of labor tightness over the summer due to workers taking vacation time, said John Nardi, president of the NYSA. The delay also enabled the port to get newly hired workers trained and integrated into the marine terminal work pool, he said.

The change allows longshore workers to be hired for Sunday and Monday shifts on a Saturday, instead of a Friday as happens at present. The change is designed to enable terminals to more accurately hire only the labor they need, avoiding a scenario in which hires are made on a Friday, but circumstances change over the weekend and terminals end up with too many or not enough workers. A future policy will allow hiring on Sunday for vessels arriving Monday.

The delayed launch comes at the end of a summer during which several marine terminals have suffered sporadic labor shortages. APM Terminals told customers last Friday it experienced congestion at its inbound and outbound gates due to a labor shortage that day. Officials at another terminal they didn’t want identified said their facility experienced labor shortages over the summer and had some days in which the terminal was short dozens of workers, which sometimes amounted to 20 or 30 percent of that day’s workforce.

That shortage sometimes prompted the terminal to extend opening hours, the terminal operator said, adding that “while shortages have caused slightly longer turn times or extensions of ship stays, the port has still functioned well throughout the summer.”

New York-New Jersey is in the process of hiring 650 longshore workers and checkers, the largest group of new hires since 2014, which will increase the registry of 3,500 longshore workers by about 8 percent. About 350 of the hires will replace retiring workers and the remainder will take new positions, fueled in large part by the growing cargo volume handled by the port.

The port has so far hired 120 of the new workers, who start work in the port cruise and auto sections before they are trained and moved to marine terminals, Nardi said. Another 100 are ready to be taken on, he said.

Employers pushed for the change in weekend hiring to make better use of weekend labor and cut the cost of paying longshore workers for standing idle when vessels don’t arrive on schedule. Terminals hire the labor, but the costs are generally passed on to ocean carriers. One terminal source close to the master contract negotiations said those payments cost some ocean carriers millions of dollars per year.

Nardi said the NYSA is also looking to make the use of labor more efficient by reducing absenteeism at the port, adding the association is still working out its strategy on how to pursue workers with unexcused absences.

ILA President Harold J. Daggett, who has pushed to improve the productivity of his membership to fend off the threat of automation, took up the issue of absenteeism at the ILA quadrennial convention in Hollywood, Florida in July. In a speech, part of which is shown in a video on the ILA website, he urged the members to help reduce the level of no-shows.

“You know who those 10 percent are in your locals,” he told the conference. “Straighten them out or get rid of them.”

Nardi, in the same session at the conference, also focused on the issue, the video shows.

How do I apply to become a

Permalink Submitted by andre8324@gmail.com on Sep 12, 2019 12:00PM EDT
How do I apply to become a longshoreman or where do I go
Port News›US Ports›Port of New York and New Jersey
North America›United States