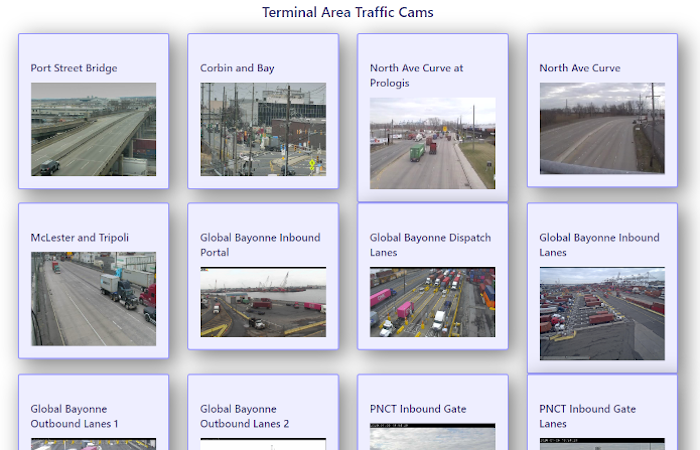 Real-time video that enables truckers to view traffic levels on key arteries within the Port of New York and New Jersey is expected to help better inform dispatch decisions and improve truck flow as cargo volumes at the port increase.

The video from five cameras posted online since Dec. 31 by the Association of Bi-State Motor Carriers adds to the live video streams of traffic at the gates of three of the port’s busiest marine terminals — GCT Bayonne, Port Newark Container Terminal, and APM Terminals — that truckers have monitored for three years.

The video feeds help truckers time their trips to different parts of the port, avoiding those with congestion until the traffic eases, said Lisa Yakomin, president of the Association of Bi-State Motor Carriers. Volume at the group’s website, which gets about 31,000 viewer visits a month, has increased 25 percent since the association added the new video streams, she said.

Dispatchers in particular say the new cameras offer a useful tool, providing “an overall bird’s eye view of what is happening at the port in real time,” Yakomin said.

“If they see that the local streets surrounding one terminal are a little bit busy, they can shuffle things around and maybe delay sending a trucker to a certain terminal, maybe send them somewhere else to adjust for traffic,” she said.

The volume of cargo through the port increased 3 percent to 4.38 million loaded TEU in the first 10 months of 2019, compared with the same period in 2018, according to PIERS, a sister product of JOC.com within IHS Markit.

The initiative, launched with the help of the Port Authority of New York and New Jersey, which operates the cameras and supplies the video, reflects the port’s need to improve cargo fluidity in and around the port, not just in the marine terminals.

The port authority will soon embark on a $132 million project to upgrade the main entryway into the port, Port Street in Newark, by redesigning the traffic flow through a series of intersections, realigning and widening the roads, and upgrading the signal light system.

That section of the port is one of the five areas monitored in the live-stream cameras posted since the start of the year; the others are in Elizabeth.