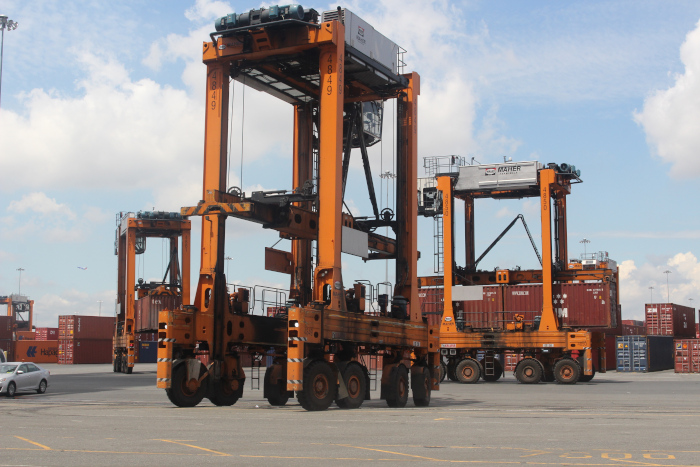 Containers at Maher Terminals in the Port of New York and New Jersey can now be scanned for radioactivity as they are moved by a straddle carrier from the dock to the rail terminal. Photo credit: Hugh R. Morley.

A redesign of the way that import cargo to be transported by rail is scanned for radioactivity at Maher Terminals in the Port of New York and New Jersey has cut the ship-to-vessel time “significantly” as the port is seeking to attract more discretionary cargo bound for the Midwest.

Under the new system, introduced by the terminal in July in conjunction with US Customs and Border Protection (CBP), a straddle carrier carrying the containers passes through two stacks of containers on which a radiation portal monitor (RPM) is mounted. The RPM scans the cargo as it passes through, without stopping, on its way from the ship to the rail terminal.

All imports through United States ports must be scanned to detect the presence of radioactive materials that could potentially harm public health or safety, or, in the extreme, signal the presence of a nuclear, or “dirty,” bomb.

Although they were unable to provide exact figures on the time saved, port officials said the previous system, which required the terminal to line up containers on the ground — sometimes 20 or 30 at once — and then scan them with an RPM mounted on a truck, was far slower and more resource intensive. Maher Terminals wasn't available for comment.

“The new system speeds up the process,” as well as reducing the amount of terminal space needed to scan containers, said Cory Wyatt, manager, intermodal rail development for the Port Authority of New York and New Jersey. “It has significantly reduced the time from the vessel to the rail, as far as dwell time. It's really a game changer as far as getting boxes on to the rails.”

Port officials said Maher Terminal is the first terminal on the East Coast to use the new system, which was developed by the Northwest Seaport Alliance. The system has reduced the amount of work in moving containers and has cut 12 to 18 hours from the time needed to scan a container, said Mike Reilly, director of intermodal business development for the Northwest Seaport Alliance, adding that Maher Terminals visited the alliance to learn how the system worked.

The system in New York-New Jersey is one way CBP is working to maintain cargo flow as ports see larger vessels, especially since the opening of the expanded Panama Canal in June 2016 and raising of the Bayonne Bridge a year later, which allowed the passage of vessels up to 13,000 TEU, CBP said in a statement emailed to JOC.com.

Handling 2,000 containers a day at Maher Terminals, the system enables the agency to “detect and interdict contraband while facilitating the flow of commerce,” the statement said, adding that it has “provided cost savings to the trade community, facilitated increased cargo processing, and provided operational efficiencies for both CBP and maritime and railroad partners.

Ports director Sam Ruda said the new system last week was one of several steps the port has taken to improve fluidity as it prepares to host larger vessels and secure more discretionary cargo, especially bound for the Midwest.

The port is also working with CSX Transportation and Norfolk Southern Railway to improve the flow of rail cars back into the port. Port officials say imports going by rail outnumber exports coming into the port three-to-one, resulting in a shortfall of empty rail cars for import containers. “We really think that we can expand our intermodal reach, probably really reach into the grain and agriculture belt,” Ruda said.

Through August 2019, the number of containers moved in and out of New York-New Jersey by rail increased 4.3 percent to 445,414 containers over the same eight-month period in 2018, according to port authority figures. A port master plan released in July projected total cargo volumes will rise from 7 million TEU in 2018 to between 11.5 million and 17 million TEU by 2050, with discretionary cargo volumes growing faster than cargo tied to the New York region.

The port is looking to increase the annual volume of cargo that departs or arrives by rail from 640,000 containers in 2018 — just over 40 percent of the ports 1.5 million TEU rail capacity — to 900,000 within five years.

GCT Bayonne, one of the four largest container terminals in the port, opened the second and final phase of a $149 million rail terminal in June. The opening of the terminal concluded a nearly three-decade, $1 billion effort to bring on- or near-dock rail service to all four of the major terminals at the port — GCT Bayonne, Maher Terminals, PNCT, and APM Terminals — as well as to the smaller GCT New York Terminal on Staten Island.